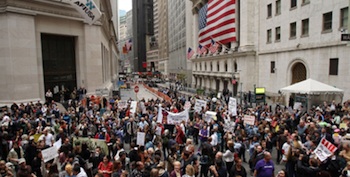 On June 1, stock markets in New York and around the world declined in levels not seen since last summer 2010. Days and weeks immediately ahead will likely register even further significant market declines, as the obvious becomes increasingly evident: the U.S. and other major global economies are once again on the cusp of a significant slowdown.

In a recent post a few weeks ago, entitled ‘Why March-April’s Job Gains Will Collapse This Summer’, this writer warned that the official hype about job recovery promoted by the business press, and distorted US government data, was grossly inaccurate. Behind the false jobs data lay a growing picture of imminent economic relapse. The U.S. Labor Department’s jobs numbers due this Friday, June 3, will likely further corroborate this view.

But the coming economic slowdown is not simply a result of the failure to create a sustained recovery of jobs in the U.S. for the past two years of so-called economic recovery. Nearly all economic indicators have been deteriorating since the beginning of 2011, even though policy makers and Wall St. investors have been diligently ignoring the fact.

Consumption growth, which represents 70% of the U.S. economy, early in 2011 fell by half compared to the previous period in 2010, from 4% to 2.2%. Real spending, adjusted for inflation, has been mostly flat so far in 2011. Rising gas prices have accounted for 60% of consumption gains in 2011. Escalating prices for food, health care, local taxes, and education costs have taken a further toll. The wealthiest 10% of consumer households now account for 60% of spending—buoyed by the past year of stock market gains that are now about to be reversed. High end retail stores, like Tiffany’s, rake in record sales while low end retailers like Wal-Mart struggle for sales. Apart from the wealthiest households, there has thus been no real sustained recovery of consumer spending in the US economy for the past two years. Retail sales have fallen the last three months in a row. And the lack of job growth, falling home values, rising core inflation (food & energy), and declining real incomes for the 95 million households earning less than $100,000 a year means a ‘flat’ at best scenario for consumer spending for 2011.

Housing, which accounts for another 10% of the US economy, is in a deep depression, a condition comparable only to the 1930s. So no help here. Housing starts, sales, building permits—are off by 75% from 2007 highs. After having dropped by 25% in the first phase of the recession, then briefly leveling off, home prices are in decline once again. Another 15% drop is predicted. There’s never been a sustained recovery from any of the ten post-1945 U.S. recessions without a housing recovery; and the latter is clearly more unlikely than ever today, given the nearly 10 million foreclosures and 16 million—i.e. more than a third—of home in negative equity.

What little economic growth has occurred since June 2009 has been the result of inventory buildup by business, moderate spending on tech equipment, and a brief surge of manufacturing, with much of the latter driven by export sales. But manufacturing represents only 10% of the US economy and cannot by itself lead the economy onto a sustained growth path. Moreover, it too has begun to slow and decline in the past two months as the global sources of demand for US exports begin themselves to decline.  The U.S. index measuring manufacturing activity in May fell a full 7 points and new orders by almost 11 points—one of the largest declines in recent years and back to the low point of June 2009.  Global sources for US exports are drying up as well. China, India, and Brazil have all taken action to dramatically slow their economies growth rates down by at least half. Meanwhile, Japan, Australia, the United Kingdom have all re-entered a recession, while the periphery economies of the Eurozone continue in an ever-deepening economic contraction.

The so-called economic recovery that has been underway since the official end of the recession in June 2009 has been the weakest and most lopsided recovery from recession in the post-1945 period. The ‘best’ quarters of economic growth, which occurred in the second half of 2009, were merely half that typical of recoveries from recessions. In all ‘normal’ recessions before 2007, growth averaged 8%-9% in the quarters immediately following the official end of the preceding recession; following the June 2009 low point of the current recession, however, U.S. economic growth was barely half that averaging only 4%-5%. In 2010 it further trended down. And in the first quarter of the current year, 2011, it was only 1.8%.  For the second quarter of 2011 it will almost certainly fall below 1.8%.

The ‘recovery’ from the June 2009 recession trough actually lasted only 12 months. The U.S. economy suffered a relapse by the summer 2010. Unemployment started rising in June 2010 and continued for the next three months and home foreclosures hit record highs by August 2010. Nearly all other indicators recovered, at best, only half of their previous losses by late last summer.

This led to the Federal Reserve Bank of the U.S. policy of pumping another $600 billion into the economy last fall in the form of direct bond purchases from the public, a policy called Quantitative Easing 2, or QE2. That effort is now over and comes to an end this month, June 2011, however. The Fed policy succeeded in giving a final, last boost to the stock market, which is now dramatically coming to an end. It also succeeded in lowering the value of the US dollar and thus in temporarily stimulating export sales. But QE2 failed to lower mortgage rates much and resurrect the housing markets. And it totally failed to get banks to lend to small businesses and create jobs. Bank lending has fallen nearly every month since June 2009. Meanwhile, large businesses sit on their $2 trillion cash hoard and refuse to spend in the US to create jobs.

What the US economy is about to experience this coming summer 2011 is therefore a return of the economic relapse that began a year ago, in summer 2010, but that was temporarily checked by government and Fed policies late last year. However, now that the Fed is in retreat once again, now that states and cities are beginning to cut spending and raise taxes in earnest, and now that the ‘Teaparty’ Congress and the Obama administration are about to dramatically cut federal spending as well—the combined effect will almost certainly result in another major economic relapse of the US economy in the months ahead.

For a further, more in depth analysis of the ‘Coming Double Dip Recession’, the reader is encouraged to read the writer’s forthcoming article in the July-August issue of ‘Z’ magazine; or his predictions of an inevitable double dip in his recent book, Epic Recession: Prelude to Global Depression.

Jack is the author of Epic Recession: Prelude to Global Depression, Pluto Press, May 2010; and the forthcoming book, Obama’s Economy: Recovery for the Few, Pluto Press, 2011. His website is: www.kyklosproductions and blog, jackrasmus.com.

This article was originally published on ZCommunications.