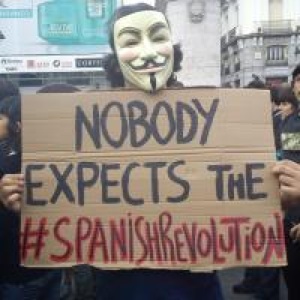 The May 15 Movement marks a turning point from the web to the street, from conversations around the kitchen table to mass mobilizations, from outrage to hope. Tens of thousands responded to a call for real democracy, a democracy no longer tailored to the greed of the few, but to the needs of the people.

Many are outraged by parliamentary politics that make the weakest pay for the crisis. In the last few years we have witnessed big banks receive billions in bail outs, while cuts in social provision, brutal assaults on basic rights and covert privatizations ate away at an already skeletal Spanish welfare state.

This outrage magnified when confronted with the cowardice of politicians. What happened to the promises to give capitalism a human face? What happened to the idea of abolishing corporate tax havens? What of the plans to strictly regulate the financial system, tax speculative gains and stop tax benefits for the richest?

While some may see the May 15  movement as warning to the big unions and major left parties trounced in the May 22 elections, it is much more than that. Sure, there is general disaffection with the institutional left. The Socialist Party’s crushing election losses stem from its inability to move beyond the dominant narrative that a scarcity of resources is at root of current economic woes. Let’s be clear: there is no lack of resources. The real problem is the extremely uneven distribution of wealth, and the financial “discipline” of austerity, which is exacerbating the situation.

Where are the huge profits of the real estate bubble? Where are the returns of mega-projects such as useless airports in Castellón, Huesca and Lleida? Who is benefiting from the mountain of debt crippling so many households?

Who can forgive Prime Minister Zapatero when after parliament rejected a proposal to allow people to walk away from worthless mortgages he said it could “jeopardize the solvency of the Spanish financial system”? Was he addressing the millions of people enslaved by their mortgages or the major banks?

What can we say of the law of intellectual property, the infamous Ley Sinde? Was he standing with those who have shaped the web or with those who plan to make money out of it, as if culture was just another commodity?

If the institutional left continues to ignore social movements, if it refuses to break from a script written by the financial and political elites, if it fails to come up with a plan that could lead us out of the crisis, it will lose whatever social legitimacy it still has.

The May 15 Movement reveals that citizens have been able to organize themselves amid a profound crisis of political representation and institutional abandonment. New generations have learned how to shape the web, creating new ways of “being together,” and armed with a savvy pragmatism that escapes from preconceived political categories and cumbersome bureaucratic apparatuses.

We are witnessing new “majority minorities” who demand democracy and social rights in the face of a war “of all against all” and the social atomization, privatization and welfare cuts promoted by neoliberalism.

Old political goals may be of little use. Hoping for an impossible return to the fold of the State, or aiming for full employment — like the whole parliamentary left seems to be doing — is pointless. Reinventing democracy requires new ways of distributing wealth, citizenship rights for all regardless of birthplace, the defense of common goods like environmental resources, knowledge, education, the internet and health, and different forms of self-governance that can transcend the corruption of current ones.

This movement is linked to a wider current of European protests against austerity. These protests defy the image of a silent mass of Europeans, an image that serves the interests of elites. These include campaigns like UK Uncut against Conservative Party policies, mass mobilizations of Geraçao a Rasca in Portugal, general strikes in Greece and France, and what happened in Iceland after the people decided not to bail out the bankers. And, of course, inspiration is found above all in the Arab Spring, the democratic revolts in Egypt and Tunisia that overthrew their corrupt leaders.

We now have at least two routes out of this crisis: implementing yet more cuts or constructing a real democracy. The first has failed to bring back economic “normality”; it has created an atmosphere of “every man for himself,” a war of all against all. The second promises an absolute and constituent democracy. It has just started to lay down its path. But this is the path we choose.

Tomás Herreros and Emmanuel Rodríguez are members of Universidad Nomada a collective of autonomous education. Translated by Yaiza Hernández Velázquez.