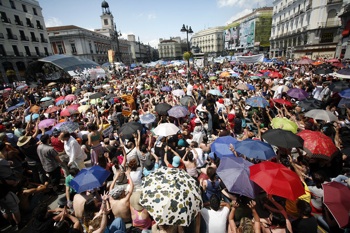 In late April, the progressive Spanish daily Publico asked why there was so little resistance to the economic crisis, despite 5 million jobless and rising misery.

The union and social movement leaders and left academics interviewed pointed to the numbing impact of mass unemployment, the casualization of work, the bureaucratization of organized labor, widespread skepticism that striking could achieve anything and the economic cushion provided by Spain’s extended families.

They also cited the apparent failure of French and Greek general strikes against austerity. The consensus was that, given the absence in Europe of even one successful struggle, people in Spain were resigned to battling their way through the crisis as best they could.

Just over one month later, camps of thousands of los indiganados (“the outraged”) are pitched in the squares of at least 80 Spanish cities and towns.

The eyes of the world are on Madrid’s Puerta del Sol and Barcelona’s Plaza Catalunya, where the occupiers are denouncing pro-corporate austerity, political corruption and demanding a “new system.”

How did it come about? It is not for lack of anger.

In January, the leaders of the two major union confederations — the Workers Commissions (CC.OO.) and General Union of Workers (UGT) — agreed to a rise in the retirement age and a “social accord” with the national government and the employers. The unions led a general strike last Sept. 29. But once this deal was done, nothing more could be expected of them — any resistance would have to come from elsewhere.

Polls showed 70 to 75 percent of Spaniards opposed the moves. Similar majorities have opposed bank bailouts, the forced restructuring of the credit unions and cuts to the welfare system.

The signs of a fight back emerged in early 2011 among young people in Spain, one of the most internet-savvy groups in Europe.

In January, another activist website appeared, “Franco Did Not Die,” in reference to Spain’s fascist dictator who died in 1975. Its initial purpose was to raise funds in support of Judge Baltasar Garzón, who was suspended in May 2010 after investigating the crimes of Franco’s regime too enthusiastically, but the campaign broadened into a movement against political manipulation of the judiciary.

The site “State of Malaise,” dedicated to bringing democracy and transparency into political life, began calling for weekly Friday protests across the country.

“Acuable.es”, the main online petitioning site, combined with global site Avaaz to launch a campaign against candidates charged with corruption running in the May 22 local government elections.

The growing mood of defiance was shown by the success of the short essay “Get Outraged” by 93-year-old French Resistance veteran Stephane Hessel. This call to arms against the destruction of the European welfare state and democratic rights is one of the hottest books in Spain.

The trigger that brought these cyber-protests onto the streets came from neighboring Portugal. On March 15, a 300,000-strong protest was held in Lisbon by the “generation on the scrapheap,” a “non-party political” outpouring of young people demanding a future.

On April 7, the newly formed Spanish “Youth Without a Future” collective called a demonstration under the slogan “without work, without house, without pension, without fear.”

Hundreds were expected; about 5,000 showed up, encouraging organizers to call another protest on May 15. This call was supported by the Real Democracy Now! group. This slogan captured the widespread conviction that no matter how the people vote, bankers get richer, politicians do their bidding and life gets worse.

This rejection of institutional politics was expressed in the now-famous saying: “We are not merchandise in the hands of bankers and politicians.”

The first encampment took place that day in Madrid’s central plaza, Puerta del Sol. Police attempts to close it down were defeated by the thousands pouring into the site after appeals on Facebook and Twitter.

The Madrid camp was reproduced across Spain, showing people wanted to do more than march and go home. The camps have become the centers of an ongoing teach-in, of what one activist has called “a continuous exercise in liberation.”
They have given heart to millions of working people who share the campers hatred for “the politicians,” and who cheered on May 27 as police attempts to close down the camp in Barcelona’s Plaza Catalunya were humiliatingly defeated by sheer force of numbers.

Whatever happens next, the May 15 Movement has won a huge victory. Resistance is possible, it can win, and with greater organization and participation it will win more.