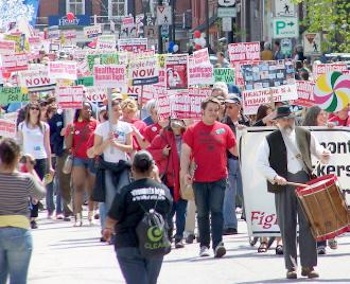 Tristin Adie, a nurse practitioner in Vermont and member of the Vermont Federation of Nurses and Health Professionals, explains what was won with the state’s new health care law–and what activists must keep fighting for in the coming years.

On May 26, Vermont Gov. Peter Shumlin signed into law H. 202, a bill that is intended to set the state on the road to a single-payer health care system. While the legislation puts off the creation of such a system for a number of years, this is an important initial victory for thousands of activists in the state who have been agitating for years for a truly universal system.

James Haslam, director of the Vermont Workers’ Center and the Healthcare Is a Human Right Campaign, called the bill:

a victory for our movement, for all Vermonters and for the country as a whole…Our success shows that when people come together, make their voices heard and demand their rights, we can overcome well-funded special interests and change what’s politically possible.

The bill establishes that “all Vermont residents shall be eligible for Green Mountain Care, a universal health care program that will provide health benefits through a single payment system.”

However, Green Mountain Care would not go into effect for several years. And the law’s initial effects will be quite modest: The legislation empowers Shumlin to create a five-member board that will “lay the groundwork” for a state-run system. The board is charged with crafting proposals for funding the system, determining what types of benefits will be covered and setting payment rates for health care providers.

The law also mandates that the state set up a health care “exchange” of various insurance plans by January 2014, to conform with the requirements of President Obama’s Patient Protection and Affordable Care Act (PPACA).

The exchange would then be replaced by Green Mountain Care sometime between 2014 and 2017, depending on when–and if–federal officials grant the state a waiver to “innovate” its own system. This would enable Vermont to utilize whatever funds are provided by PPACA in the creation and maintenance of a single-payer system.

As many activists have pointed out, including leaders of Physicians for a National Health Program (PNHP), this is far from the ideal of establishing a single-payer system in the immediate future. PNHP President Garrett Adams called attention to the fact that the law will allow private insurers to operate in the state indefinitely, even when Green Mountain Care is put in place:

Allowing multiple insurers in the system will deny Vermonters the enormous administrative savings they would otherwise get under a true single-payer plan. Having multiple insurers also nullifies the potential bargaining power of a “single payer” to negotiate reduced prices for pharmaceutical drugs and other goods and services.

And while it may be seen as an interim measure until Green Mountain Care kicks in, the exchange created by 2014 will be a “marketplace” of competing private insurance plans–hardly a step forward for the thousands of people in the state currently paying high premiums, co-pays and deductibles for inadequate coverage.

The exchange would only be phased out once Vermont has obtained a waiver from the federal government to proceed with a single-payer system, in addition to waivers that will fold Medicare, Medicaid and veterans’ benefits recipients into this system.

The inclusion of the exchange in the law and the slow timeline for the creation of a single-payer system reflect the current national reality, which is a product of the federal health care law championed by the Obama administration that bargained away genuine reform measures under pressure from the insurance industry. Establishing single payer on a statewide basis will be very expensive and can only succeed if the state receives federal money to supplement its own revenues.

Vermont Sens. Bernie Sanders and Patrick Leahy have introduced a bill to move the timeline for the waivers up to 2014, but this effort has gained little momentum so far.

This leaves Vermont hamstrung for the time being by the disastrous compromises enshrined in the federal health care law. The Obama administration is clearly uninterested in helping any state establish a single-payer system, and is likely to grant necessary waivers only if pressure is brought to bear by activists, both within the state and nationally.

This pressure must be organized through the creation of grassroots networks that can demand single-payer health care in their own states, while also calling for national reform. As an important first step, PNHP has launched an online petition drive to call on the Obama administration to grant these waivers and “provide the state of Vermont with maximum flexibility to help achieve affordable health care for all.”

Activism will continue to be important as the process moves forward in Vermont.

A majority of the state’s residents expect to get a single-payer system. This is because thousands of activists have spent the last several years holding rallies, forums, town hall meetings and debates, as well as sharing hours of health care horror stories in testimony to legislators. They have made an effective case for single payer, and now legislators have raised hopes further that we will win such a system with this latest legislation.

Grassroots activism also helped beat back efforts to include right-wing provisions in the bill, such as a last-minute add-on by state senators that would have excluded undocumented immigrants from coverage under the new system.

The backers of this addendum withdrew their proposal within days after diverse groups throughout the state peppered legislators with calls, e-mails and faxes. Particularly moving was the fact that a May 1 rally of 2,000 people organized by the Healthcare Is a Human Right Campaign was dominated by calls for the inclusion of undocumented workers in the new legislation.

The health care needs of Vermonters will be met only if activism continues. The bill calls for 80 to 87 percent of health care expenses to be paid by Green Mountain Care, for example. We need to demand 100 percent payment, so that money is never an impediment to obtaining needed care.

In addition, the bill leaves open the question of whether mental health and dental care will be covered under a single-payer system. Such care is every bit as necessary to people’s well-being as colonoscopies and immunizations, and must be covered in full.

Many Vermont activists have recognized that the fight is likely to intensify as the details of creating a new system are worked out. As physician Deb Richter, a longtime fighter for single-payer health care, said:

We’re going to hear all kinds of scare stories that this is a thoughtless experiment or that it is too bold. But I would remind you that every other industrialized country is doing what we are trying to do. And they do it for far less money, they live longer and they get better-quality care.

The challenge for activists in Vermont and across the country is to crank up the pressure until we win the kind of health care system we need and deserve.