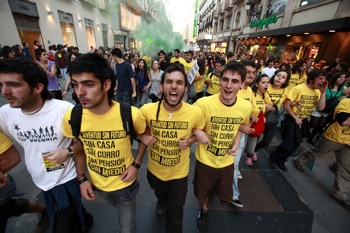 On May 15, 2011, Spain exploded into protest. Tens of thousands of people, mainly youth, began occupying public spaces in Madrid and other cities all over Spain, protesting against, among other things, a flawed political system, corrupt government, austerity for people and bailouts for banks.

It’s not easy to make sense of the complex processes unleashed on May 15. The mainstream Spanish press seems unable to grasp their significance or has resorted to sensationalism. The movement itself is in movement, in flux. In fact, its mobility and unscripted nature are probably the main sources of its disquieting power.

We would do well to recall that Spain’s two major experiments in democracy have been conducted during extremely inauspicious times for democratic movements worldwide.

The country’s first sustained attempt at a modern democracy took place from 1931 to 1936, a time of global economic depression and rising totalitarian ideologies on both the left and the right. The short-lived Second Republic made a valiant effort, under adverse circumstances, to create democratic citizens out of monarchical and even feudal subjects. It began the arduous, and still incomplete, task of separating church and state, implementing land reform and promoting gender equality. But Franco, Hitler and Mussolini snuffed out Spain’s democratic spring, aided by France, England and the United States, the dithering would-be defenders of democracy that in the late 1930s appeased Hitler, while denouncing the “excesses” on the left.

The Republic’s valiant struggle against all odds undoubtedly contributed to the way in which the Spanish Civil War — and the memory of that war — was seared into the consciousness of progressives all over the world, and still remains a point of reference and a reservoir of images of democratic hope and courage for underdogs everywhere.

There was no Youtube in 1936, but there were newsreels; there wasn’t Flickr, but there was photo-journalism; there were no Facebook walls or blogs, but there were wall newspapers and posters and pamphlets. All the latest innovations in communication and networking were tapped to mobilize global public opinion in support of the beleaguered Spanish Republic.

The second serious experiment in democracy began after Franco’s death in 1975. Spain’s transition to democracy has been admirable in many ways, but it has coincided with a dramatic impoverishment of democratic ideals and processes worldwide. Some would even say, though it sounds like a cruel joke, that Spain, whose first bid for democracy was squashed by fascism, has now become a normal democracy, but only at the very time when that concept has been hollowed out of meaning.

Many Spaniards today feel that their country — much like the United States — has settled into a stagnant and corrupt political system. They believe that the two major parties are virtually indistinguishable on the issues that affect people’s lives the most, because both are ruled by the “tyranny of common sense.” “Keep the banks, big business and the credit rating agencies happy, by imposing austerity on, and demanding efficiency from, your citizens. Let your citizens vote every once in a while —we are, after all, a democracy— and make sure that they keep consuming. When elections come around, each party should trot out the trusted, old wedge issues, which camouflage the profound similarities between the two parties and focus the attention on largely superficial or symbolic differences. The two political parties must bring out their bases on election day, even if voters have to hold their noses in disgust when they vote. Each party must scare voters into believing that the stench of the other guy is even worse than ours.”

A new common sense seems to be emerging in the wake of May 15. Many Spaniards have finally decided to say out loud, in public squares, and virtual spaces that didn’t exist 10 years ago, that you are not alone or disloyal if you think that the choices stink, if it looks to you like the emperor has no clothes, if you feel that the demos has been dropped from democracy. The protesters in Spain are wondering aloud why their access to their leaders is limited to casting a ballot once every four years, while banks, business leaders and credit rating agencies seem to have unlimited access.

The protesters are asking the basic questions supposedly left behind in these commonsensical, post-historical, post-ideological times. They are refusing to take the bait of the parties’ wedge issues. They are claiming that the two main parties have been taking them for granted, and they are saying to all of this: “basta ya.” Enough is enough.

If the Spanish government seems like a hostage of “the market,” the Spanish people feel subject to a double captivity. They are trapped in an ossified political system whose leaders seem less and less to accountable to their sequestered constituents, and more and more to their own supranational captors: those godlike international financial “markets” that whimsically giveth and taketh away.

Perhaps the screams we are hearing from Spain can best be thought of as the shouts of a hostage’s hostage, who is just becoming fully aware of, and indignant about, her double imprisonment. Of course, it is impossible to predict the outcome of the processes set in motion. Maybe things will fizzle out with the heat of July. Or maybe Spain will once again find itself at the forefront in identifying threats and pointing out promise.

Either way, we Americans should heed those calls of the hostage’s hostage, try to understand her plight, and check on the health of our own democracy, and on the status of our own freedoms. We might discover, to our own surprise, that we are all Spaniards.