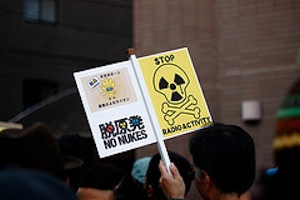 While the U.S. media has been occupied with Anthony Weiner, the Republican presidential candidates and Bristol Palin’s memoir, coverage of Japan’s Fukushima Daiichi nuclear power plant disaster has practially fallen off the map. Poor mainstream media coverage of Japan’s now months-long struggle to gain control over the Fukushima disaster has deprived Americans of crucial information about the risks of nuclear power following natural disasters. After a few weeks of covering the early aftermath of Japan’s earthquake and tsunami, the U.S. media moved on, leaving behind the crisis at Fukushima which continues to unfold. U.S. politicians, like Rep. Joe Barton of Texas, have made disappointing and misleading statements about the relative safety of nuclear power and have vowed to stick by our nuclear program, while other countries, like Germany and Italy, have taken serious steps to address the obvious risks of nuclear power — risks that the Fukushima disaster made painfully evident, at least to the rest of the world.

News outlets in other countries have been paying attention to Fukushima, though, and a relative few in this country have as well. A June 16, 2011 Al Jazeera English article titled, “Fukushima: It’s much worse than you think,” quotes a high-level former nuclear industry executive, Arnold Gunderson, who called Fukushima nohting less than “the biggest industrial catastrophe in the history of mankind.” Twenty nuclear cores have been exposed at Fukushima, Gunderson points out, saying that, along with the site’s many spent-fuel pools, gives Fukushima 20 times the release potential of Chernobyl.

Efforts to bring problems at Fukushima under control are not going well, either. Japanese authorities only just recently admitted that nuclear fuel in the three damaged Fukushima reactors has likely burned through the vessels holding it, a scenario called “melt-through”, that is even more serious than a core meltdown. Months of spraying seawater on the plant’s three melted-down fuel cores — and the spent fuel stored on site — to try and cool them has produced 26 million of gallons of radioactive wastewater, and no place to put it.

After a struggle, the Tokyo Electric Power Company (TEPCO), finally managed to put in place a system to filter radioactive particles out of the wastewater, but it broke down soon after it started operating. A filter that was supposed to last a month plugged up with radioactive material after just five hours, indicating there is more radioactive material in the water than previously believed. Meanwhile, TEPCO is running out of space to store the radioactive water, and may be forced to again dump contaminated water into the Pacific Ocean. TEPCO already dumped some water into the ocean weeks ago, amid protests from fisherman, other countries and environmental organizations. And even if TEPCO does successfully filter the contaminated water and manage to bring its radioactivity down to acceptable levels, the utility will still have to deal with the pile of radioactive sludge the process will produce. The plan they’ve come up with to deal with the sludge is to seal it in drums and discard it into the ocean, which may cause even more problems. Greenpeace has already found levels of radiation exceeding legal limits in seaweed and shellfish samples gathered more than 12 miles away from the plant. The high levels of radiation in the samples indicate that leaks from the plant are bigger than TEPCO has revealed so far.

The cascade of other problems caused by the Fukushima disaster include the costs of relocating residents from the affected area around the plant, compensating people for the loss of their homes and belongings, and a drop-off in global sales of goods and products exported from Japan due to fear of radioactive contamination.

For Americans who think “out of sight, out of mind” or “it can’t happen here” when it comes to Fukishima and its ramifications, think again. Janette Sherman, M.D., an internal medicine specialist, and Joseph Magano, an epidemiologist with the Radiation and Public Health Project research group, noticed a 35% jump in infant mortality in eight northwestern U.S. cities located within 500 miles of the Pacific coast since the Fukushima meltdown. They wrote an essay, published by CounterPunch, suggesting there may be a link between the statistic and the Fukushima disaster. They cited similar problems with infant mortality among people who were exposed to nuclear fallout from Chernobyl. Sherman and Magano urge that steps be taken to measure the levels of radioactive isotopes in the environment of the Pacific northwest, and in the bodies of people in these areas, to determine if nuclear fallout from Fukushima could, in fact, be related to the spike in infant mortality.

Tensions are also rising over two U.S. nuclear reactors in Nebraska located on the banks of the Missouri River, which is now at flood stage. On June 20, the Omaha, Nebraska World Herald reported that flood waters from the Missouri River came within 18 inches of forcing the Cooper Nuclear Station near Brownville, Nebraska, to shut down. Officials are poised to shut down the Cooper plant when river reaches a level of 902 feet above sea level. The plant is 903 feet above sea level. The Fort Calhoun Nuclear Plant, 20 miles north of Omaha, issued a “Notification of Unusual Event” to the Nuclear Regulatory Commission on June 6 due to local flooding. That plant is currently shut down for refueling, but will not restart because of the flooding. Compounding worries over these two plants is a shortage of sand needed to fill massive numbers of sandbags to hold off Missouri River floodwaters. One ton of sand makes just 60 sandbags, and hundreds of thousands of sandbags are needed to help save towns along the river from flooding. Sand is obtained from dredging the riverbed — and the companies that sell sand can’t dredge the river while it is flooding. These plants are already in a risky situation, and the flooding in Nebraska could easily be worsened just by a summer afternoon cloudburst.

The relative safety of nuclear power in the U.S. is tenuous, despite what some politicians have claimed. A big problem is that the Nuclear Regulatory Commission (NRC) has been working with the nuclear power industry to keep our country’s reactors operating within safety standards, but they’ve been doing it by either weakening those standards, or not enforcing them at all. A year-long investigation by the Associated Press (AP) revealed that the NRC has acted appallingly, extending licenses for dozens of aging U.S. nuclear plants despite their having multiple problems, like rusted pipes, broken seals, failed cables and leaking valves. When such problems are found, the NRC will weaken the standards to help the plants meet them instead of ordering them to be repaired to meet current standards. The nuclear industry argues that the standards they are violating are “unnecessarily conservative,” and in response, the NRC simply loosens the standards. Just last year, for example, the NRC weakened the safety margin for acceptable radiation damage to nuclear reactor vessels — for the second time. Through public record requests to the NRC, the AP obtained photographs of badly rusted valves, holes eaten into the tops of reactor vessels, severe rust in pipes carrying essential water supplies, peeling walls, actively leaking water pipes and other problems found among the nation’s fleet of aging nuclear reactors.

Fukushima has been a wake up call about the dangers of nuclear power, and some countries are heeding the information. But it seems the U.S. is still sleeping when it comes to this issue. Light-to-absent coverage of TEPCO’s struggles to bring Fukushima under control, legislators who insist on acting favorably towards the nuclear power industry despite the deteriorated state of our current reactor fleet and an ineffective Nuclear Regulatory Commission have all contributed to a bad combination of a dangerous situation and a complacent American public on this issue.

Maybe now that the latest scandal in Washington has subsided, public and media attention will return to this crucial issue, and the U.S. will turn its attention to tackling some of the truly serious problems posed by a continuing reliance on nuclear power.

Anne Landman is the Managing Editor of the Center for Media and Democracy. She previously served as the editor of our TobaccoWiki project on our SourceWatch.org website. She has degrees in Environmental Restoration/Waste Management Technology and Communications.

This article was originally published on CommonDreams.org from PR Watch.