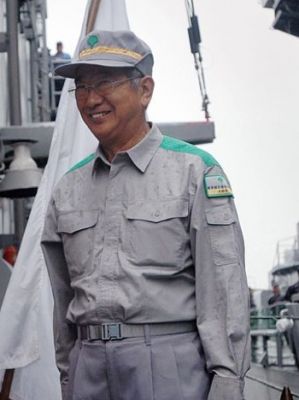 Natural disasters in Japan — drought, volcanic eruptions, earthquakes and the appearance of foreigners — used to be interpreted as signs of moral failure in the leadership of the nation. The social order was aligned with nature, so any divergence between national order and nature seemed to denote a moral failure that might lead to worse catastrophes.

After Japan’s March 11 earthquake and tsunami, an elderly Tokyo resident said: “When a country’s leaders are bad, natural disasters occur.” A similar thought also seems to have crossed the minds of some in power in Japan. A post-disaster speech made by the prime minister Kan Naoto alluded to the devastation of the country at the end of the second world war, the 1923 Tokyo earthquake, and the 1995 Kobe earthquake.

The governor of Tokyo, Ishihara Shintaro, blurted out that the earthquake and tsunami were “divine retribution” (tenbatsu) for Japan’s selfishness, materialism and the worship of money, a warning to amend this wayward lifestyle and return to the correct path. The 1923 Kanto earthquake had been viewed the same way, and Emperor Hirohito wrote in 1946, when threatened with being tried as a war criminal, that the recent war had been caused by the moral laxity of the people, seduced by materialism and consumerism.

Ishihara conveniently shifted responsibility from the political leadership to the people, a callous response to such vast human suffering — the untold dead, more than 400,000 homeless, damage to property and infrastructure, and then the fear of radioactive emissions. Perhaps more frightening, though, was the response, in both actions and presentation, of the Tokyo Electric Power Company (TEPCO), to what happened at its Fukushima No. 1 nuclear power plant, where the earthquake and tsunami had put out of commission both sets of fail-safe equipment for reactors and storage pools for spent nuclear rods, leading to the release of radiation into the atmosphere and evacuations from the surrounding area.

The head of TEPCO broke down in tears during a televised address to the nation. On behalf of TEPCO, he offered profuse, traditional-style apologies — and inadvertently suggested that the company was not at all sure about its actions. It has since been claimed that although TEPCO’s executives knew exactly what should have been done in the emergency, they took too much time to decide when to begin cooling down the reactors because they did not want to ruin them. The government then put TEPCO in charge of running electricity blackouts across Japan, meant to conserve power for essential services, allowing for reduced generation capacity and a damaged grid. The unstated cozy relationship between state and business, which consumer groups had long questioned, was suddenly made clear.

Both state and company have a well-documented history of denials of actual nuclear accidents or the very high potential, given Japan’s tectonics, for such accidents. In 2007, an earthquake in northwest Japan of far less magnitude (6.8 against the almost unprecedented 9.0) damaged the TEPCO nuclear facility at Kashiwazaki-Kariwa but not critically — luckily, for it had not been designed to withstand a quake even of that smaller size.

Northeast Japan had remained, since the 19th century, less developed than Tokyo and central and western Japan. The decision by the government and TEPCO to site nuclear energy facilities on its coast was partly an attempt to generate economic growth and prevent the southward migration of the population.

The local economy has been devastated, and the displaced and homeless appear to be very conscious they have been left alone to cope, almost unsupported by the government: Food, fuel, water, shelter arrived (where they arrived) only very slowly. They remember the government’s ineptitude after the Kobe earthquake in 1995, when it took days even to recognize the severity of the damage and organize any relief. While initial news reports focused on the immediate needs of evacuees, for most Japanese the ongoing threat of radioactive contamination is the greater concern. It also threatens the political system dominated by a single party that has presided over them for 60 years, where electoral swings have led to changes of government but not of policy.

Since WWII, the Japanese have been disciplined into a society that emphasizes hard work, uncomplaining sacrifice, conformism, steadfastness, loyalty and acceptance. Paradoxically, this has produced indifference to an unresponsive political class, and profound distrust and criticism of its leadership.

The emperor called on the people to remain calm and hopeful and take care of each other, and reminded them of a similar broadcast by his father Hirohito in 1945 that announced the end of the war, asking the nation to “endure the unendurable.”

Akihito does not claim divinity (Hirohito renounced that) but only the status of a national symbol, and this appeal consolidated the government’s request that people should remain patient, and make more sacrifices. Using the emperor in this way reinforces Ishihara’s statement and suggests an attempt to shift the responsibility from the government to the people. Most Japanese would say the imperial institution is not important, yet the fact that the government summoned the emperor to make the speech revealed that in fact it is. Few Japanese question the symbolic status of the emperor.

The emperor embodies the nation and is therefore in a position to ask people to accept the existing political arrangements (going against the constitution, which says that the people are sovereign). The idea is to transfer the Japanese people’s loyalties towards their social (and ethnic) community onto the state and the form of political rule that has been constructed to control them.

The government called the emperor in as damage control, an attempt to calm a mistrustful population and to protect the present system of authority. But the clear failure of the government to act decisively and give prompt and accurate information and aid, risks damaging the carefully constructed identification between popular sovereignty and political leadership in Japan. This threatens to undermine any chance of managing the difficult task of recovery that lies ahead.

Harry Harootunian is professor at Duke University and the Department of East Asian Studies at Columbia University, and author of The Empire’s New Clothes.