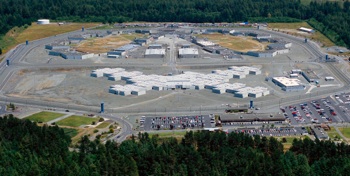 On the first day of this month, inmates at Pelican Bay State Prison, joined by inmates in other prisons around the state, began a hunger strike to protest “inhumane and torturous conditions” in the Security Housing Unit, which holds inmates in solitary confinement for decades at a time. They’re still at it; the state has admitted that as many as 6,600 inmates around the state have participated in the strike. On Saturday, corrections officials offered the prisoners a proposed deal, which they unanimously rejected.

This comes after a Supreme Court decision in May that ordered California to reduce its prison population, as overcrowding was causing “needless suffering and death.”

Part of what’s making the standoff worse is the belief that the strike is, in essence, a form of gang activity. For one thing, as Colin Dayan noted in passing in a New York Times op-ed, “How they have managed to communicate with each other is anyone’s guess.” The California Department of Corrections and Rehabilitation (CDCR), though, isn’t so stumped. Reports the San Francisco Chronicle:

“This goes to show the power, influence and reach of prison gangs,” said Terry Thornton, a spokeswoman for the state Department of Corrections and Rehabilitation. “Some people are doing it because they want to do it, and some are being ordered to do it.”

Advocates for the prisoners deny that the strike is a gang-related power-play. Continues the Chronicle:

“I don’t think this is something that represents gang control,” said Carol Strickman, an Oakland attorney who is working with the hunger strikers. “This was an unusual example of unity among groups within the CDCR, and that’s knocked them back in a way. Here, the CDCR has managed to unite the groups—inmates are seeing their enemy is not the brown person across the way.”

It stands to reason that the same criminal networks used to carry out crimes could be repurposed for organizing an act of nonviolent resistance. Such networks are not unlike the improvised channels of communication used by so many civil resistance movements—from secret codes, to smuggled letters, to Twitter. But, as Strickman says, carrying out a nonviolent campaign like a hunger strike can transform those networks from the inside. It unifies them, strengthens them, and trains them in modes of empowerment other than killing.

It has been noted by some that Pelican Bay’s Security Housing Unit is reserved for the “worst of the worst” criminals, and that the kind of treatment they receive is a necessary security measure. However, a glance at the strikers’ demands suggests that they’re merely opposing punishment that is none other than cruel and unusual; they oppose racist tactics of collective punishment, the withholding of food as a means of punishment, the denial of constructive activities, and, perhaps most importantly, the very practice of decades-long solitary confinement—which, as Atul Gawande’s 2009 New Yorker article showed, is torture in and of itself.

On Friday’s edition of Democracy Now! former inmate and strike mediator Dorsey Nunn explained, ”The only model that these guys got left is the model of Bobby Sands and the Irish strike. That’s their model.” Which is to say, there are some who have committed to carrying on the hunger strike to their deaths. As the strike approaches its third week, death is becoming a real possibility.

The California Department of Corrections and Rehabilitation has so far refused to take the prisoners’ demands seriously. As of the 8th, they were refusing to accept the hunger strike as an acceptable tactic:

Prison officials said they would not meet the requests to appease the strikers, and would not force-feed them.

“We’ve reviewed their demands, but the department is not going to be manipulated or coerced into action,” said Terry Thornton, state prisons spokeswoman. “There are appropriate ways of registering your concerns, and even though this hunger strike has been peaceful, this is not the way to register those concerns.”

She said inmates have the right to file complaints with their prisons, to appeal decisions and to ask for help from their legislative representatives.

A hunger strike, however, is an act of desperation. It is a last resort, and it’s indicative of a level of urgency that goes far beyond these more “appropriate ways of registering your concerns.” Continues Dorsey Nunn, before being interrupted: “Somebody needs to think about what would drive human beings to—”

For the latest, listen in on a Critical Resistance national conference call this afternoon. There are also solidarity demonstrations taking place around the US and Canada.