One of the most wondrous aspects about bicycling in New York is that the city both expands and shrinks dramatically. You can visit neighborhoods inaccessible to public transportation. Far-off parks and beaches can be reached in barely an hour. Panoramic views offer new perspectives on the urban geography. Hidden stretches of coastline along rivers and bays deliver solitude from the fray. The industrial bowels can be plumbed, from landfills and train yards to factories, piers and waterworks.

Plus, bicycling has never been easier in the city, with miles of dedicated lanes on streets and car-free greenways. For the Manhattan novice, skip the zoo of Central Park and head out to the West Side greenway, a vehicle-free 13-mile stretch from the Southern tip at the Battery to the Northern terminus near the idyllic Cloisters Museum. For Brooklyn greenhorns, Prospect Park is the best bet; cars are banned on weekends and the 3.4-mile loop is a great way to build stamina and learn the art of navigating traffic in a safe environment. The Bronx is also bicycle-friendly, with greenways bisecting the borough along the Mosholu, Bronx River and Pelham Parkways. The interior of Queens is largely bereft of car-free paths, but Forest Park and Flushing Meadows are spots of two-wheeled tranquility. Staten Island offers a few attractions such as the ship graveyard, but a lack of bike paths and obnoxious motorists makes it best avoided except for experienced cyclists.

There are many websites that can plot bike-friendly routes, including google maps, mapmyride.com and ridethecity.com, but nothing beats doing it yourself or even better, being guided by an experienced hand. 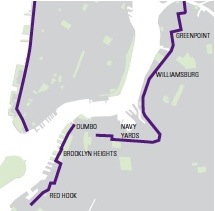 Huge lengths of greenways connect park and beaches and lead to some of the best ethnic cuisine, sights and architecture in the city. Start in Dumbo under the Brooklyn Bridge. Going south takes you through Brooklyn Heights and into Red Hook along the shoreline where you can check out ship traffic.

Going east from Dumbo, skirt the Navy Yards and cut north to Williamsburg and Greenpoint. Just to the east is Bushwick, where hundreds of food factories and warehouses that form an integral link in the city’s food chain are also the site of labor struggles for fair wages and humane working conditions by the largely immigrant workforce. Further north the Pulaski Bridge crosses into Queens.

To get to South Brooklyn, take the D, M, N or R to Sunset Park. On the east side of the park is a massive Art Deco-style public pool, a Works Progress Administration project going strong after 75 years. On the other side, sit on the sloping hill facing west and soak in gorgeous sunsets, a grand sweep of downtown Manhattan and views so far into New Jersey you can see mountains on a clear day.

From where the greenway ends in Bath Beach, Coney Island is a few miles to the southeast by road, but novices often make use of the sidewalk. On the western tip, you can try to check out Seagate. An enclave mainly of Russians, Hasidim and the elderly, Seagate is separated by walls and security from dilapidated blocks housing mostly Blacks and Latinos. One or two cyclists (helps if you’re white and female) can often convince the security guard to let them peddle through this apartheid-style burg.

Coney Island – “The People’s Playground” – is being threatened by invasive species like high-rise condos, chain stores and sports bars. The iconic Cyclone Rollercoaster and Nathan’s are secure, and the Circus Sideshow and Burlesque at the Beach continue to serve up healthy doses of freaks and sleaze, but the “Shoot the Freak” paintball game has been shuttered for now by the new corporate bosses. Still, it’s a prime destination for baking in the sun, drinking cheap beers and even sneaking a quick toke amid a sea of all colors, classes and cultures.

More beaches can be found in Brighton Beach and Manhattan Beach, a secluded spit of land that vies for having the most-appalling named thoroughfare in the city, “Heroes of Operation Iraqi Freedom Way.” Those seeking pleasure cruises or fishing expeditions can find numerous options at the pier in Sheepshead Bay.

Further east is the next section of the Shore Parkway, part of the Gateway National Recreation Area. First is Plumb Beach, a favorite of kite boarders. Secluded beaches on inlets and peninsulas lie unused except for the few who venture off the beaten path. After a couple of miles on the greenway, turn right (south) at the traffic light. After a mile, adventurers (with sturdy footwear) pick up foot trails and make for “Bottle Beach” at Dead Horse Bay, an old landfill being eroded by rising ocean waters, uncovering unique glass containers many decades old. On the other side, Floyd Bennett Field is a prime spot for biking, and hiking as well as the only campground in the city.

Like the rest of Manhattan, the West Side Greenway is a study in power and privilege. Private commerce creeps into the public space at many points, and the further north one travels from the Financial District, the more diverse and colorful the various scenes become.

From the Southern tip at the Battery, one can take in a grand view of the harbor with the Statue of Liberty at its center.

West Side Piers near Christopher St. One of the few safe gathering places for queer and transgendered youth of color, the city has consistently tried to repress public life here.

12th-20th St. A block to the east, the High Line Park offers a corporate-branded respite from the hustle and bustle.

15th-16th St. Pier 57, renamed “Guantanamo on the Hudson” by hundreds of people illegally detained there by the NYPD during the Republican National Convention in 2004.

17th-22nd St. The Sports Center at Chelsea Piers. Where right-wing liberals go to play for only $2,000 a year in fees.

22nd St. Pier 62 Skatepark. Free and open to the public 8am to sunset, except winter.

After 59th St., the path goes under the West Side Highway. A park is to the left. At 70th St., an outdoor café serves up food and beer.

72nd St. One of three spots along the Hudson that offer free kayaking, downtownboathouse.org.

90th St. and after, the West Side Greenaway abuts the banks of the Hudson. Traffic lessens and the path becomes prettier. Picnickers, sunbathers, transients, musicians, people meditating or doing yoga dot the sides of the paths, making this a pleasant ride.

125th St. The path keeps going with a small park and piers across from Fairway. One small stretch is often closed, meaning you have to detour on the road for a few blocks. But don’t miss the next portion, the best of the West Side bicycle path.

137th – 145th St. To no one’s surprise, the North River Wastewater Treatment Plant was moved from a wealthy neighborhood to West Harlem. After a community outcry and organizing, pollution and odor controls were built. It now hosts a 28-acre park that offers many types of outdoor activities and spectacular views of the Hudson, Palisades and Manhattan skyline.

148th – 155th St. Mostly Dominican families gather in this area. The scene is lively, grilling and baseball are favored pastimes, and the path along the river is pleasant, but the NYPD has cracked down hard on the locals blasting salsa from club-quality audio systems outfitted in their rides.

165th – 178th St. This may be the most beautiful spot and one of the best-kept secrets in all of Manhattan, capped by Fort Washington Park. There’s a tiny beach along the Hudson that appears at low tide, a grassy field and it is almost always sparsely used. It’s an ideal spot for finding peace and quiet in the outdoors.

179th St. The path climbs quickly and fiercely, going from sea level to just below the GW Bridge.

181st St. Take the walkway over the highway and pick up the path over the GW bridge for cycling north and south along the Palisades. Or continue on and check out the Grecian Temple built in 1925.

205th St. The path ends here, but go down the stairs and Inwood Hill Park is just ahead. Also a few minutes away is Fort Tryon Park and the Cloisters Museum, an authentic reconstruction of a medieval monastery set among gardens and trees that offers hours of natural reveries.

IN THE HEART OF QUEENS 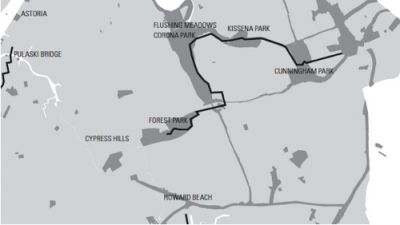 Taking the path over the Gil Hodges Marine Parkway Bridge brings you into Queens and the Rockaways. Head toward the beach and then right (west) to Fort Tilden. The lack of lifeguards and sparse ranger patrols makes this a favorite of nudists and swimmers who want to be left alone. Be forewarned, unpredictable riptides on Rockaway claim lives every year. On the other side of the beach, hidden in the dense scrub, are abandoned military bunkers that attract explorers equipped with flashlights, waterproof boots and plenty of bug repellent.

Still further east is a seven-mile stretch of public beach with lifeguards. Around 90th St. is New York’s surf scene, a popular skate park and gourmet food stalls along and off the boardwalk, including excellent fish tacos, coffee, Italian ices, burgers and arepas. The Sand Bar at 116th St. is a true beach-front dive, stocked with red-faced, gin-soaked barflies. At 9pm, after the police usually wrap up their patrols, starts a new scene of beachcombing, fishing, barbecuing, drinking and (risky) night swimming.

Deep in the Rockaways are colonies of decaying, abandoned beach bungalows. Those up for a longer ride can continue on to Seagirt Ave. and cross the drawbridge into Long Island. Many of the white-sand beaches here are private, but public ones can be accessed by buying a day pass in Atlantic Beach.

An alternate route back into the city from the Rockaways is available by going north across the Veterans Memorial Bridge around 95th St. At the top is a breathtaking 360-degree vantage point where you can see every borough, deep in Long Island, Staten Island and the Verrazano Bridge, jet planes taking off and landing at JFK, cargo ships in the Atlantic Ocean, and the picturesque islands, marshes and waterways of the Jamaica Bay Wildlife Refuge. The refuge, with its myriad avian residents, is easy to access by continuing north. After crossing another bridge, the path ends in Howard Beach, worth a ride through for garish home flourishes of columns, marble, tiled driveways, stone lions, fake waterfalls, and double winding staircases.

In Howard Beach, the Shore Parkway leads west, 10 miles back to Coney Island. Or journey a few miles north to Forest Park. To the southwest are paths and bike routes on streets snaking through Forest Park and Cypress Hills Cemetery. To the north is Flushing Meadows Corona Park, home to the Unisphere, a 140-foot-tall steel globe mounted inside a giant fountain that kids use to cool off. Nearby is a new (privately funded) skate park, replicating many top spots for tricks such as the Brooklyn Banks 9-stair rail, Union Square’s rail and steps, 1 Police Plaza 7-stair rail, and the Chrystie Park ledge. The two-square-mile Flushing Meadows has a wealth of other sites, including the hands-on New York Hall of Science; the man-made Meadow Lake, open for fishing, boating and sailing; and the Queens Museum of Art, which contains a huge scale model of New York City.

East of Flushing Meadows is the Queens Botanical Garden and the velodrome in Kissena Park, where you can pretend to be an Olympic racer, tearing around the banked track. East is Cunningham Park, which has miles of mountain bike trails. Turning north at Alley Pond Park will carry you along the northern edge of Queens through seaside neighborhoods and scenic biking along bays that barely seem like New York.

Other spots not to be missed in Queens include the Socrates Sculpture Park and the 330-long public pool, both in Astoria along the East River.