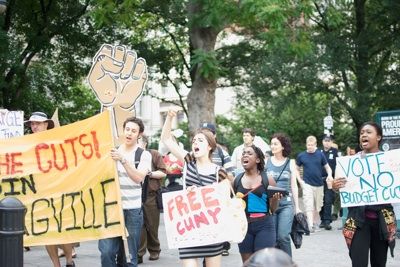 The Mayor and City Council had unexpected company during the final two weeks of June as they contemplated budget cuts to a number of vital city services and programs.

Across the street from City Hall Park, a makeshift, around-the-clock encampment of dozens of protesters took root at the corner of Broadway and Park Place. Sheltered by both scaffolding attached to the Woolworth Building and court rulings that have affirmed sleeping outside as a constitutionally protected form of protest, the residents of “Bloombergville” resorted to making a home on 900 square feet of Lower Manhattan sidewalk.

“That’s New York,” said Larry Hales, an unemployed college graduate. “If you are a Wall Street banker, you have access to Bloomberg whenever you need it. But if you are from the boroughs and you are a worker or a student or a teacher, you can’t even get to the steps of City Hall.”

Part protest base camp/part community center, Bloombergville reclaimed public space for dissent in a way that has not occurred in New York since 9/11. It also created a common ground for a variety of left groups and tendencies to work together in a way also rarely seen in this city.

Operating under the banner of New Yorkers Against Budget Cuts, the majority of the protesters, like Hales, were in their 20s and 30s, face a future of limited job prospects and see a political system disconnected from the concerns of ordinary people. They drew inspiration from mass occupations of public space that have recently propelled protest movements from Egypt to Spain to Madison, Wisconsin as well as from the “Hoovervilles” of the 1930s.

Bloombergville organized daily protests of as many as 200 people. These actions culminated in a raucous June 28 demonstration in which 13 people were arrested for barricading the entrance to the office building at 250 Broadway. City Council members, who have offices in the building, were inside negotiating the final details of the budget. A near-riot ensued when police attacked protesters who had surrounded and briefly blocked the two police vans called to carry away the arrestees.

Organized through a general assembly that met each night at 8 p.m., Bloombergville also served as the movement’s living room. People could drop in and share donated food and drink, debate politics for hours, take out books from the “Bloombergville Library,” attend evening teach-ins at “Bloombergville University” led by City University of New York (CUNY) professors such as Frances Fox Piven and Stanley Aronowitz or take the stage during open-mic night.

“It was like you were inviting people into your home,” said Jacqueline DiSalvo, 68, a retired CUNY professor. Yotam Marom, a Bloombergville organizer, estimated 2,000 people participated in the encampment in some way over the course of its existence.

Bloombergville participants also ranged far away from their home base, engaging in activities such as wearing sandwich boards in Union Square on which they invited people to write their thoughts about Bloomberg’s proposed budget cuts and putting on anti-budget cuts performances in the subways while passing out informational fliers.

“People respond when somebody explains in a friendly and creative way what is going on,” Marom said.

Bloombergville marked the arrival of an innovative protest tactic in New York that will likely be refined and used again in the future. Still, it never came close to attaining the mass participation organizers had initially hoped for and was largely a sideshow to final budget negotiations between the Mayor and City Council that produced a deal which is expected to lead to the layoff of 1,200 city workers, larger school class sizes and cuts in funding for city libraries and scholarship money for CUNY students.

As The Indypendent goes to press, Bloombergville participants have just begun to discuss how to move forward to create a much larger movement that can pose a serious challenge to the politics of austerity in New York City, which require the poor and the working class to sacrifice while the wealthy remain untouched.

Some suggest creating public spaces that offer basic services like free books or ESL classes as a starting point for initiating political discussion with individuals who are apolitical but have an inchoate class anger. Others urge base-building through outreach to community groups already fighting austerity measures in their communities.

“We need to build up our forces so that we can have the kind of mass presence we hoped for this time,” said Courtney Cenname of New Yorkers Against Budget Cuts (NYABC).

In the weeks before Bloombergville was launched on June 14, “action assemblies” were held in the South Bronx, Jackson Heights, Queens and on Staten Island. The forums featured organizers from a variety of groups speaking on the impact of austerity measures in their communities. Audience members were also given a chance to speak about their experiences. Flyering was done in advance in nearby schools, subways and stores in order to broaden turnout.

“All these problems come from one root,” Cenname told The Indypendent. “Having an organization that is looking at the larger picture is really important.”