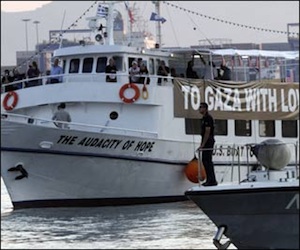 Instead of high-fiving each other for their success in thwarting the Gaza Freedom Flotilla, Israeli officials should be throwing overboard the propaganda hacks who catapulted the flotilla into headline news for weeks and left Israel smelling like rotten fish.

Last year, when the Israeli military killed nine aboard the Turkish ship, the incident made waves around the world. But in previous years, the same international coalition had sent boats to Gaza five times, successfully reaching their destination with a symbolic shipment of humanitarian aid. No blood, no military interception, no story. That’s why the advice of many of Israel’s best buddies, including the lobby group AIPAC, was to just ignore the flotilla.

But no, the Israeli government refused to listen and instead announced with great bravado that it was prepared to stop the flotilla with lethal force—including snipers and attack dogs. Smelling blood, the media frenzy began. Before even leaving home, passengers were besieged with press calls inquiring why we were willing to risk our lives and giving us a chance to talk about the plight of the people of Gaza. Worse yet from the Israeli government perspective, mainstream media began bombarding us with requests to come along. With space for only ten media on our boat, we ended up choosing reps from CNN, CBS, Al Jazeera, AP, The Nation and Democracy Now. Other boats in the flotilla also started scrambling to accommodate more press. Thanks to Israel, we were guaranteed that no matter what happened, the whole world would be watching.

The Israeli government’s next blunder was a doozy. It sent a letter to foreign journalists warning them that if they participated in the flotilla, they would be denied entry into Israel for ten years and their equipment would be impounded. The outcry from journalists and media organizations worldwide was immediate. Israel’s Foreign Press Association said the threat “sends a chilling message to the international media and raises serious questions about Israel’s commitment to freedom of the press.” Prime Minister Benjamin Netanyahu was forced to rescind the decision, blaming it on his underlings.

But the blunders continued. A YouTube video of a “gay rights activist” who claimed he was not allowed to join the flotilla because he was gay and linked the flotilla to Hamas was exposed as a hoax disseminated by employees of the Israeli Government Press Office and the Israeli Foreign Ministry.

Senior Israeli defense officials told journalists that flotilla activists were intending to dump bags of sulfer on Israeli soldiers to paralyze them and/or light them on fire “like a torch.” We countered by holding an open house on the boat, inviting the media to inspect every nook and cranny and meet with nurses, lawyers, musicians, writers, grandmothers and other “terrorists” on board. The Israeli government looked so silly that even cabinet ministers criticized Netanyahu’s “media spin” and “public relations hysteria.”

Then there was the sabotage of the Irish and Swedish boats, the frivolous lawsuits and legal complaints by the Israeli Law Center (Shurat HaDin), the strong arming of the Greek government to issue a ban on all boats traveling to Gaza, and undoubtedly more dirty tricks that will be exposed in the future.

Through it all, the Israelis helped us turn a potential non-story into a media blitz that has not ended. The passengers are now returning home to the local public spotlight. Rather than being depressed by Israeli maneuvers to prevent the flotilla from reaching its destination, they are more motivated to speak out about the siege of Gaza and bullying tactics of the Israelis. Flotilla organizers are still fighting to get their boats released by the Greek government and vow to try again.

Our modest and peaceful initiative has exposed, for the world to see, the lengths the Israeli government will go to to stop nonviolent international initiatives. We have put the plight of Gaza and the illegality of the siege once again on the radar where it was previously ignored. We have exposed the sad but ultimately unsustainable fact that the Israelis have managed to extend their vindictive siege of Gaza to the shores of Europe and have widened the gulf between the Greek government and Greek popular sentiment with regard to Palestine.

Most importantly, we have given a boost to the larger, massive, multicultural, multinational movement for Palestinian rights. This Friday, hundreds of international activists are flying to Ben Gurion airport where they plan to tell border control agents of their intent to visit Palestine. This “flytilla,” as it has been dubbed, has also aroused a hysterical response from the Netanyahu government. Here again, the world’s attention will be focused on Israel’s control and blockade of movement in and out of the West Bank. The Knesset is on the verge of passing a bill that will effectively outlaw boycotts, a law that will likely only strengthen the resolve and increase the size of the international Boycott, Divestment and Sanctions (BDS) Movement. And then there will be the showdown at the United Nations, when Palestinians will be calling for recognition as a state.

The Israeli government can only continue its egregious violations of human rights and torpedoing nonviolence initiatives for so long. Eventually, justice will prevail and Palestine will be free. And initiatives like the flotilla will be remembered as part of a continuous wave of resistance that helped turned the tide.”

Medea Benjamin (medea@globalexchange.org) is cofounder of Global Exchange (www.globalexchange.org) and CODEPINK: Women for Peace (www.codepinkalert.org). She is author of Don’t Be Afraid Gringo: A Honduran Woman Speaks from the Heart.