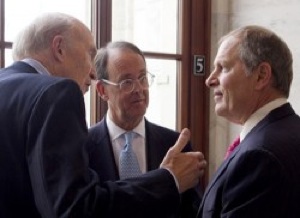 Last Thursday, Honeywell CEO David Cote was scheduled to speak at a Senate luncheon attended by the legislative chamber’s Democrats. His topic: How Senate Democrats could create jobs.

Honeywell – one of the nation’s largest multinationals – would seem a poor choice for such a discussion since the Company has engaged in a lockout of 228 USW members at Local 7-669 in Metropolis, Illinois since June 2010, seeking drastic concessions from our members. For years this Honeywell facility has put USW members and the community at risk innumerable times because of multiple health and safety standard violations cited by OSHA, the NRC and the EPA. If CEO Cote really desires to create jobs in the U.S. he could immediately create 228 good paying jobs by simply ending this disastrous lockout of our members in Metropolis, Illinois.

Ultimately, Thursday’s luncheon was cancelled for reasons that are unclear. Senate Majority Leader Harry Reid’s (D-Nev.) office did not respond to request for comment and it’s unclear if the luncheon will be rescheduled with Honeywell CEO David Cote—along with Steve Case, CEO of the private equity firm Revolution and former CEO of AOL, and John Lechleiter, the chairman and CEO of pharmaceutical company Eli Lilly & Co.—on the schedule.

In an email to In These Times written Monday, Durbin spokeswoman Christina Mulka wrote that “Senator Durbin has been following the Honeywell situation in Metropolis very closely and has been urging both sides to come to an agreement. He has met with the Honeywell CEO in the past in Washington and has brought up the lockout in Metropolis.” Mulka did not respond directly when asked if Senator Durbin would support inviting Honeywell CEO David Cote back to lecture Senate Democrats in the future.

Senate Democrats’ invitation of Cote invited Honeywell CEO David Cote to lecture about job creation while he is locking out union workers raises troubling questions about the political allegiances of Senate Democrats.

In a labor struggle, workers typically have very little economic power to leverage against corporations in order to force them into settling a labor dispute. Workers’ power in a labor dispute typically comes from their ability to publically embarrass a corporation in both the political and media arena in order to force a corporation to settle. By inviting Cote to lecture on jobs creation, Senate Democrats were elevating a prominent union buster into the media spotlight, rather than tarnishing his name, as many locked-out workers would like to see.