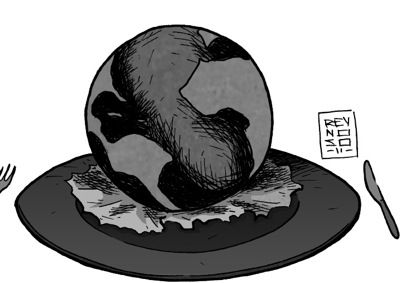 While cities like Paris, Hong Kong and Tokyo generally have more sophisticated food cultures than New York City, the Big Apple probably has the broadest variety of cuisines in the world. Food provides an easy way to explore the diverse cultures of the city. The thousands of restaurants offer windows into the hundreds of ethnic groups that call the city home. Here is but a small sampling for many adventures into New York’s gastronomic soul.

BAY RIDGE
This mixed neighborhood has the best Middle Eastern restaurant in the city, Tanoreen at 7523 3rd Ave. near 76th St., which specializes in Palestinian cooking with virtually every dish exceptional. Close by is a Middle Eastern deli at 6905 3rd Ave. with excellent take-out food. Nordic Delicacies at 6909 3rd Ave. keeps lingonberry jam, meatballs and smoked herrings for those jonesing for a Scandinavian feast. Meanwhile, Grand Sichuan House at 8701 5th Ave. is a tribute to the spicy, mouth-tingling cuisine of the region.

BRIGHTON BEACH
Home to dozens of Russian restaurants, the best eatery is the “Ukranian fusion” Café Glechik at 3159 Coney Island Ave. The soups and stews have deep, rich flavors, while small dumplings (vareniki) and the larger Russian version (pelemeni) can be found on nearly every table. Nearby are Russian supermarkets stocked with everything you could want from the old country, including plenty of caviar and smoked fish. At 1073 Brighton Beach Ave. is La Brioche Café, which is like a Willy Wonka of pastry, stacked and piled in every available nook. On the boardwalk near 6th St. are a few restaurants. They are over-priced and service is slow, but the garlic fries at Tatiana Grill are the perfect oceanside snack, accompanied by pitchers of the fruity beer called kvas.

MIDWOOD & SHEEPSHEAD BAY
Deep in South Brooklyn is a stretch of temples of Turkish cuisine. Tacis Beyti at 1955 Coney Island Ave. (near Ave. P) is considered by many to be the best of the bunch. The eggplant and shepherd’s salads are fresh, the bread made in house and the meats grilled just right. The sauteed calf liver cubes are a house specialty. A few steps away at 1985 Coney Island Ave. is Gulluoglu, a bakery that is part of a well-known Turkish chain. The baklava has a deep pistachio flavor and savory pastries are perfect for breakfast the next day. In Sheepshead Bay, at 3075 Emmons Ave., Halikarnas draws from Turkey’s relationship to the sea, offering all manner of expertly prepared fish, warm pillowy bread and terrific taramosalata, made from cured carp or cod roe.

RED HOOK
While the city has forced food vendors at the ball field to work out of trucks instead of open-air carts, and the weekend crowds tend much more toward Anglos than the Latin Americans families who congregate here for futball, the pupusas and huaraches at Clinton St. and Bay St. are not to be missed. Get some elote (boiled corn slathered with cheese, mayonnaise, lime juice and spices) on the side and agua fresca to wash it down then for dessert head for Steve’s Authentic Key Lime Pies at 204 Van Dyke St. Speaking of pies, not too far from Red Hook is Four and Twenty Blackbirds in Gowanus, which has a well-balanced lemon chess pie, while Pies n’ Thighs at 166 South 4th St. Williamsburg has a summer-perfect sour cherry pie.

PROSPECT-LEFFERTS GARDENS
Similar to the proliferation of pizzerias with Ray in the name, there is a plethora of roti stops in Brooklyn paying homage to Ali. One is Trinidad Ali Roti on 589 Flatbush Ave. in Prospect-Lefferts Gardens. It has the requisite flaky wrapping holding toothsome goat, chicken and even a satisfying vegetable version for non-meat eaters. Others swear that De Hot Pot nearby at 1127 Washington Ave. is the place to go for a roti and doubles fix.

SUNSET PARK
Sunset Park is one of the premier ethnic food destinations in the whole city, dense with Vietnamese and Chinese restaurants on 7th and 8th Aves. Fifth Avenue is taco alley, with dozens of outposts vying for hungry crowds:

Xochimilco
Reasonably good tacos and horchata, but the draw is a unique sandwich, the Pambazo, which Voice critic Robert Sietsema describes as a spicy-potato sandwich drenched with so much chile sauce “your fingers will glow radioactive-red for a week.”
4501 Fifth Ave., near 45th St.

Tacos Matamoras
This professional operation seems to defy the usual home-style aesthetic, but many consider it top dog for tacos in the area, even though consistency is a problem. The funkier options tend to be superior, such as cabeza (cow head meat).
4508 5th Ave., btwn. 45th & 46th St.

Kai Feng Fu
The expertly prepared dumplings at this hole in a wall are only four for $1, while the scallion pancakes are a crispy delight.
4801 8th Ave., btwn. 48th & 49th St.

LOWER EAST SIDE
Hit the Doughnut Plant at 379 Grand St., which still beats out worthy newcomers like Dough at 305 Franklin Ave. in Bed-Sty and old-timers like Peter Pan Bakery at 727 Manhattan Ave. in Greenpoint. Shopsin’s, Stall No. 16, 120 Essex St. is known for its 900-item menu, including Slutty Cakes, and quirky food combinations and dining rules. Russ & Daughters at 179 E. Houston St. is another L.E.S. destination, rated as having the number one smoked salmon in town. Head south to the Roasting Plant at 81 Orchard St. for a superior cup of coffee and chocolate chip cookies that out-do even the famed Jacque Torres effort. A few blocks to the west, at 118 Eldridge St., is Vanessa’s Dumplings House. She seems to feed half the neighborhood with her dirt-cheap and delicious dumplings, noodle soups and inventive scallion pancake sandwiches. Eldridge is a mecca for Fujianese hand-pulled noodles. Head to Chinatown to Fay Da Bakery, at 83 Mott St., for the amazing taro puffs and tasty scallion twists. Also close by is Great NY Noodletown, at 28 Bayard St., at the foot of the Manhattan Bridge, renowned for its succulent roast suckling pig, tender salt-baked seafood and superior soft-shell crabs. Cong Ly at 124 Hester St. has some of the best bun around, a light Vietnamese dish of noodles, vegetables, tangy dressing and meat or seafood of choice.

MIDTOWN & EAST VILLAGE
New York is overrun with sushi restaurants, and ramen is all the rage, but there is more to Japanese cuisine than that. Katsu-Hama at 11 E. 47th St. in Midtown serves perfect pucks of tonkatsu, breaded, fried pork cutlets that are juicy and deeply flavorful. While Otafuku on 236 E. 9th St. near 2nd Ave. specializes in rich, filling okonomyaki, cabbage and egg pancakes with your choice of filling, and delicious takoyaki, octopus balls. Nearby at 29 3rd Ave., on the second floor, is Sunrise Mart, which stocks thousands of Japanese food products.

UPPER MANHATTAN
At Cachapas y Mas in Northern Manhattan at 107B Dyckman St., choose from dozens of types of cachapas (stuffed corn cakes), burritos, arepas and sandwiches, including the patacón, where the bread is replaced by giant discs of fried, green plantains. Caracas Arepas Bar at 93 E. 7th St. in the East Village is considered to be largely responsible for the Arepas craze, the grilled, dry corn cakes that are a vehicle for various fillings. Try the Pabellon, which crams in beef, black beans, sweet plantains and salty cheese, but also get the empanadas, a pocket food you will want to take everywhere.

ASTORIA
When Egypt erupted in revolution in January, “Little Cairo” on Steinway Street in Astoria became the central spot for debate, solidarity protests and celebration. One of the top spots for Egyptian food is Kabab Café at 25-12 Steinway St. near 25th Ave., run by a gregarious leftist, Ali El Sayed. He holds court in his tiny, mismatched establishment, dishing out scrumptious lamb cheeks, a large vegetarian meze and goat chops drizzled with pomegranate molasses. A few doors down at Mombar at 25-22 Steinway St. Ali’s brother Moustafa concentrates on clay-pot cooking with equal deftness behind the stove.

CORONA
When Tortilleria Nixtamal, located at 104-05 47th Ave. between 104th and 108th Streets, opened in 2009, this Mexican-focused eatery was the only place in the city making masa from scratch. While various offerings were over-cooked on a recent visit, the tortillas will swear you off factory-produced varieties and can be purchased by the pound to go, along with delicious tamales.

Just a few blocks away from Tortilleria Nixtamal, El Globo Restaurante at 42-13 102 St. offers chapulines (grasshopper) and huitlacoche (corn smut) tacos. This isn’t some weird food dare. Grasshoppers are commonly eaten in Oaxaca and the chapulines taco is tasty and crunchy, while the huitlacoche has a pleasing fungal funk (and is prized by many chefs).

FLUSHING
Here is one of six different Chinatowns in town, more evidence why New York may be the most amazing food city in the world. It would take weeks to explore it all, but a few highlights include the delicate wontons in hot oil at White Bear, 135-02 Roosevelt Ave. #5; the $1 Peking duck buns stall on Main St. and 40th Rd.; the addictive $1 sticks of meat at Xinjiang BBQ Cart, 41st Ave. and Kissena Blvd.; top-notch soup dumplings at Nan Xiang Xiao Long Bao, 38-12 Prince St.; the cumin lamb burger and “hand-ripped” spicy lamb noodles at Xi’an Famous Foods and Lanzhou’s hand-pulled noodles — both locations are in the basement of Flushing Mall at 133-31 39th Ave.