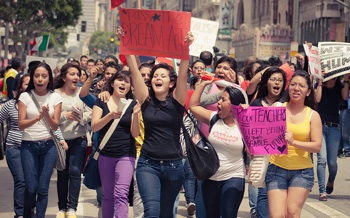 Starting January 1 of 2012, undocumented immigrant college students will be eligible for privately funded non-state scholarships that they previously did not have access to at California community colleges, state colleges and public universities. The bill breezed through the Senate two weeks ago. AB 130 will cost taxpayers nothing, and so was widely seen as an easier political sell. Still, its passage is being hailed as a victory for immigrant communities. The California DREAM Act had been continually approved by the state legislature but was vetoed three times by former Gov. Arnold Schwarzenegger.

This year Assemblyman Gil Cedillo used a different strategy and split the DREAM Act into two bills when he reintroduced the DREAM Act. The second bill, AB 131, which is currently in suspension in Senate committee, is the more controversial and significant of the two bills. It would allow undocumented students to access Cal Grants, the state financial aid and allow undocumented college students to qualify for Board of Governors fee waivers for community colleges which allows low-income students to have their tuition waived. AB 131 would also allow students at the University of California system to be eligible for university grants.

“So really, the real DREAM Act is AB 131,” said Jonathan Perez, an activist and the founder of San Gabriel Valley DREAM Team. “It holds most of the actual aid.”

Under AB 131, legal permanent residents and U.S. citizens would have priority for Cal Grants. Undocumented immigrant students and out-of-state students would only be eligible after the former group had been taken care of. Perez said that this stipulation would mean that undocumented immigrant students would likely not see Cal Grant money until the economy improves, but that the provision was important nonetheless. Perez, like other activists pushing for AB 131, said that allowing University of California students to become eligible for university grants and tuition was an essential part of tuition equity; undocumented immigrant students pay full tuition, part of which goes into a pot of money that’s redistributed as financial aid for low-income students, but are then blocked from access to university grants and scholarships.

A 2007 UCLA study found that 40 percent of the country’s undocumented immigrant youth population lives in California, and estimated the number of undocumented young people at around 26,000. In California community colleges, 34,000 undocumented immigrant students take advantage of AB 540, the 2001 state law that allows students who’ve graduated from California high schools to pay in-state tuition, regardless of their immigration status, the San Francisco Chronicle reported. In the Cal State system, 3,600 students are enrolled under AB 540, and the UC system has 642 AB 540 students.

The state’s readiness to call the passage of AB 130 a victory frustrates activists who say it’s urgent to keep the political momentum behind AB 131, which has until August to move out of committee.

“We heard a lot that they’re ready to celebrate and frankly that’s very troublesome for us because their celebration is premature,” said Perez. “This is our lives. A lot of students don’t go to school because they can’t afford it.” Perez said that California DREAM Act groups were not done with their organizing and are planning an event for later this week to keep pressing for AB 131.

This was originally published on ColorLines.com.