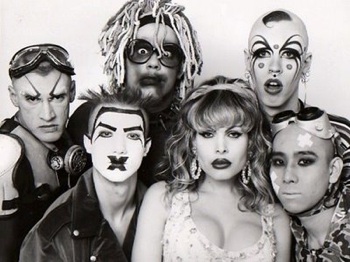 The New York Club Kids of the late ’80s and early ’90s became famous for throwing “outlaw” parties in places such as the High Line tracks (before it was an authorized “green space”), a donut shop and subway cars. While these parties gained notoriety more for the rampant drug use than the clever use of ordinary spaces for subversive fun, their brazenness is something to be admired. In a city that becomes more exclusive, expensive and policed with each summer season, it might be helpful to look to the Club Kids’ model of searching out cheap thrills. All it takes to have a public party is some creativity, a little bit of willing defiance and a pack of brown paper bags to cover up those open containers.

BRIDGES
We often think of bridges simply as the passing between two places, but bridges can also be places in themselves (and I don’t mean just as a photo background for your NYC scrapbook). The middle of the Manhattan and Williamsburg bridges for instance have small set-off spaces perfect for making or wilin’ out. Police almost never come to these areas because that would involve physical activity, and most civilians are too busy getting to the other side to get up in your business.

STATEN ISLAND FERRY
As one of the hallmarks of gratuitous wealth in this country, a yacht is something most of us can only squint at longingly from the shore. However, turn those squinting powers towards the Staten Island Ferry and lo, you have The People’s Yacht. The ferry might not look as nice as Jay-Z’s ride, but the ride is free, it goes right by Lady Liberty and best of all, drinking is legal (beer is sold, but not hard liquor). One could bring a few friends, some bottles of bubbly and spend the night yo-yo-ing back and forth across the Upper Bay.

ABANDONED SUBWAY STATIONS
If you want to have a truly underground party that doesn’t cost $25 at the door and involve talking to gaggles of performance artists, we hear that subway spelunking offers some intriguing possibilities.
The city is littered with abandoned stations that wait to be re-discovered. For starters, experts say keep your eyes pressed up to the subway car plexiglass, note any turns that twist away from the route and you might be on your way to re-making the map.

Some notable stations include the beautiful City Hall station (approach from the Fulton Street station) built in 1904 as the crown jewel of the subway system or the less opulent graffiti haven of 91st Street station, which is easily approachable on the red line.

If one were to venture down this path, underground adventurers report these explorations do carry some risk, both to one’s body and criminal record, and they recommend extreme caution in going onto these tracks, finding one’s way down them and also avoiding the bobbing lights that signal city workers are on the way.

For more info on searching out the city’s secrets, check out Undercity, a documentary short about Stephen Duncan, a self-proclaimed guerrilla historian who spends his nights finding out about the city’s buried past and avoiding the transit authorities.

HOTELS
Hotels are havens of amenities that do not necessarily have to be restricted to paying customers. For instance, hotel lounges are great places to sit back and enjoy the free air conditioning. They also often have free Wi-Fi, so you can bring your laptop and work in breezy coolness. Other possible perks are rooftop access, free food and, of course, pools that can be snuck into with the proper “Aw shucks, I forgot my key card” excuse to a real hotel patron.
So, put on some of your nicer duds and stroll through those sliding doors like you have an American Express Black card and a minibar with your name on it.

PARKS
For some reason, the NYC parks department closes all parks at dusk or at the latest 2 a.m. After those hours the NYPD will make occasional rounds to harass those posing immense menace to society by lounging on lawns, sitting on a bench or strolling hand-in-hand down a shady lane. Fortunately, police patrol mostly by car or at the most, Segway, and often the most beautiful parts of city parks are those farthest from the roads. Promising venues for the adventurous to explore include the “Forever Wild” section of Riverside, the island castle of Central Park or the nature trails of Prospect Park.

While the places above are all good to start your explorations, the best part of the summer is discovery. Re-appropriating public (and sometimes private) spaces is all about imagination and subversion. More New Yorkers than you think are challenging themselves to step outside the boundaries, jump the fence or stay out past curfew.