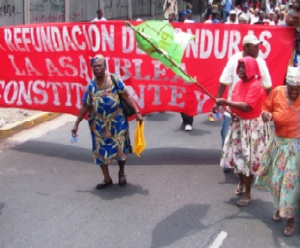 Proposals to radically re-formulate the constitution of Honduras need to incorporate the experiences and perspectives of indigenous and Afro-Honduran women, declared Berta Cáceres, a longtime feminist indigenous activist and an organizer of the Constitutional Assembly Self-Organized by Indigenous and Afro-Honduran Women.  The historic event, which is taking place July 10-14, 2011 in Copán Ruinas, will include indigenous and Afro women delegates from all over Honduras, said Cáceres, who is also coordinator of COPINH  (Civic Council of Indigenous and Popular Organizations in Honduras). Many of these women have been front and center in the popular resistance movement against the repression following the coup d’etat in their country in June, 2009, struggling against assaults on their lands, sovereignty, natural resources and cultures.  Likewise, many have been specifically targeted as leaders in these struggles with aggressive and violent assaults and detentions by police and private security forces.

Along the northern coast of Honduras, there are 48 Garifuna communities “who are suffering an accelerated expulsion from our territories that we have inhabited for 214 years,” said Miriam Miranda of OFRANEH (National Fraternal Organization of Black Hondurans) in a public letter she released after being violently detained and assaulted by security forces in March, 2011 for her role as a leader in the resistance. Communal lands of the Garifuna have been subject to widespread privatization as part of massive development plans by the government and World Bank to create big tourist resorts and “model cities.”  The Garifuna are matrilocal, meaning the land has been traditionally passed along matrilineal lines, so this massive assault on communal lands has hit women particularly hard (Vacanti Brondo, 2007). 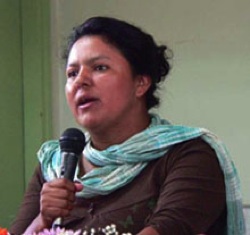 Women’s experiences and perspectives need to be taken into account in constructing a “pluri-national, pluri-cultural constitution that recognizes the richness of our indigenous knowledge, and that includes the right to autonomy of the indigenous,” noted Cáceres.

The Constitutional Assembly, which brings women from the Lenca, Maya Chortí, Garifuna, Tawaka, Miskito, Pech and Tolopan indigenous groups, is a key step in the “Refoundation” process now underway among indigenous peoples in Honduras to demand autonomy and sovereign rights.  The women will contribute by developing concrete gender-specific proposals for the constitution related to land rights, protection of biodiversity, water, forests, and mining resources, as well as autonomy and self determination, and rights to communication.

Why a Constitutional Assembly? Responding to longtime demands by social movements for a new more inclusive Constitution, former President Mel Zelaya, who was forcibly ousted in the coup in June 2009, on that same day had scheduled a referendum vote for people to decide if they wanted to hold a Constitutional Assembly.  Since the coup, which was orchestrated by Honduran elites and corporate interests, a demand for a Constituent Assembly has been a key objective of the popular resistance movement.  Also in strong support  are indigenous and Afro-Honduran peoples who see a new constitutiona as a means to create legal protections for natural resources on indigenous lands, recognize multiculturalism of the country, and incorporate greater recognition of women’s rights.

Women delegates will meet to share their experiences in the resistance and the situation in their communities and within their own organizations, said Cárceres.  This will enable them to better articulate strategies “to support the struggle not only against capitalism but also against racism and patriarchy…”  And making these connections requires going beyond reports of ongoing violations of indigenous and women’s human rights today to examine the patriarchal roots of colonialism and neoliberalism that have provided historical precedents and current strategies for the ongoing repression of indigenous and Afro peoples.  “This is part of the history of the resistence that we as indigenous and Afro-Honduran women continue to develop,” noted Cárceres.

Also a central part of the Indigenous and Afro-Women’s Assembly are large cultural and spiritual ceremonies led by women from the different indigenous communities.  Locating the event in Copán Ruinas is highly significant because in addition to being an important archeological site, the area has a long history of resistance of indigenous peoples, and the Maya Chortí in particular.