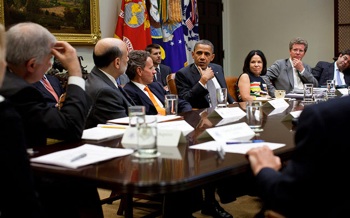 Politicians never tire of tropes, and there’s one tickling many on their tongues these days: Americans want Washington to deal with its debt, just like we do in our own families. Which is funny, given that American families have never been so deeply indebted. In 2004, total U.S. family debt exceeded income for the first time since the Federal Reserve began tracking it, according to a Center for American Progress report. By 2007, debt had ballooned to 130 percent of income. Mass foreclosures and credit card defaults have slowly brought that number down, but American families still ended 2010 with more debt than income.

These facts form an important backdrop as President Obama’s signature piece of banking reform, the Consumer Financial Protection Bureau, officially comes into existence today (without a director). That’s because the debt explosion didn’t happen by accident, and it didn’t happen to everyone equally. We got into this predicament because financial services companies designed businesses to put us here. And the worst players among them specifically targeted the low-income communities of color that are still most vulnerable to their dangerous products.

At the close of the 20th century, the financial sector came unhinged, encouraged by Washington’s bipartisan blessing and driven by big banks’ hunt for large, fast profits. Subprime refinances and other exotic mortgages were the most widely damaging result. But financial firms dreamed up debt-trap products ranging from rent-to-own furniture to subprime credit cards with exploding rates, all meant to prey upon consumers (read: workers) who were making less money even as prices climbed for basic and luxury goods alike.

Estimates vary on the exact haul the financial industry brings in with this stuff. Elizabeth Warren, who banks successfully lobbied to keep out of the CFPB director’s chair, says the overall financial services industry is a $3 trillion enterprise. Payday lenders alone have built a $30 billion industry off of small loans with triple-digit interest rates that keep people paying out for years. The point is, they’re getting rich off of our debt. Never mind China; you needn’t look further than Chase’s headquarters for a dire threat to American solvency.

Or that of Wells Fargo, which settled a Federal Reserve civil suit yesterday by agreeing to pay out $85 million to borrowers it steered into subprime loans despite the fact that they qualified for prime-rate loans. As we know from previous lawsuits brought against Wells Fargo, its loan officers particularly pushed what they called “ghetto loans” on black borrowers, whom they called “mud people,” according to affidavits from former employees. The settlement represents the largest fine the Fed has ever imposed in a consumer case, reports Huffington Post’s Shahien Nasiripour, but it is puny compared to the $7.7 billion in profits Wells Fargo has already made this year. The bank maintains its innocence in the matter.

Nasiripour also reports that the Fed case is thus far the sole example of a federal regulator taking action against a bank for steering people into subprime loans. That’s a remarkable and telling fact. We know from congressional hearings that banking regulators discovered serious problems with subprime mortgage lending much before the bust began and chose to do nothing. Ditto for the ratings agencies that blessed the loans. The only people who tried to act on behalf of consumers in advance of the crisis were state legislators—and the financial services industry overwhelmed them by pouring millions of dollars into state-level battles to block or repeal rules that would have saved us from the subprime tsunami.

The same process has unfolded in states around the country who are working to reign in high-cost consumer lending like payday and auto-title loans. Between 2000 and 2004, the payday industry more than doubled in size, as its lobbyists peeled away state-level rules on consumer lending and Wall Street banks pumped money into the bottom-feeding industry. In 2010, big banks put $1.5 billion into payday firms, according to consumer advocate National People’s Action. Wells Fargo led the way, financing five of the six largest payday firms. Again, while these products have certainly penetrated every part of the economy, they saturate communities of color most deeply.

This is all without talking about student loans, pre-paid debit cards, personal finance companies, tax-day loans, car loans, debt settlement and foreclosure scams, or the proliferating number of checking account products that look an awful lot like payday loans. The financial waters are shark infested. We have rarely so badly needed a regulator like the new Consumer Financial Protection Agency.

And yet, Republicans have vowed to filibuster the nomination of the bureau’s director until the White House agrees to cut its power. The bureau already must answer to a board of existing bank regulators—the same ones who have thus far refused to do a thing on behalf of consumers. It is already housed inside the Fed rather than as a standalone agency and has a cap on its budget. But as my Nation magazine colleague Ari Melber reported in an essential piece detailing the corporate attack on financial-sector accountability, the Chamber of Commerce spent $17 million lobbying against the CFPB in the first quarter of 2011 alone. There could be no more essential fight for the coming years than making sure the Chamber does not get its money’s worth.