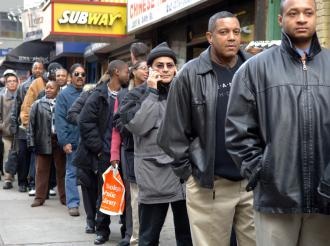 The Labor Department’s job figures for June brought unalloyed bad news: the job market has stalled. And as Republican policies gain influence, even on President Obama’s own strategy, the successful parts of Obama’s initial policies are fading away.

In their place comes a new and misguided focus on reducing deficits that accepts cutting programs like Social Security that bring stability to working people’s retirement and to the economy. There will also be more cuts in public employment that are already undermining the recovery.

Obama still talks about expanding infrastructure investment, but most of the administration proposals, like extending the payroll tax credit, are unlikely to stimulate employment much, or may lose more jobs than they will create, such as three new free trade agreements.

As a result, the prospects for job growth during the next year, even the next several years, are increasingly dim. So are political prospects for Obama and the Democrats, let alone a strong progressive agenda. Yet there is new evidence that the job problem is grave largely because of the depth of the Great Recession, resulting from decades of financial deregulation, corporate globalization and rising inequality.

The June numbers are grim: The official unemployment rate crept up one-tenth of a point to 9.2 percent, as the private sector generated only 57,000 new jobs and government shed 39,000 more jobs, producing a net gain of only 18,000 jobs. By contrast, from February through April, the economy created on average 225,000 new jobs each month—and that was still far short of the number needed both to absorb an expanding workforce and to re-employ laid-off workers (44.4 percent of whom have been out of work a half year or more for a post-Depression record). To meet needs of both new entrants and the jobless, the U.S. needs at least 11.1 million new jobs.

This recession and its lingering aftermath in the job market took the greatest toll on American workers since the 1930s, eliminating 6.9 million jobs. Adding to the difficulties, the economic downturn was largely a result of a financial crisis, which is typically harder to escape (consider Japan’s lost decade after a burst real estate bubble in the 1990s).

Also, globalization likely has contributed to the difficulty of engineering a fast recovery (for example, much stimulus leaks out to other countries as consumers of all types buy imports, and globalization has cost the U.S. many manufacturing jobs, normally an important element in quick rebounds). And Americans had amassed huge debt loads, including bubble-inflated home mortgages—a result of financial engineering gone wild, attempts to compensate for stagnant or declining incomes for most workers, and rising inequality. That makes recovery through consumer spending and a rebound of the housing market less likely.

Contrary to right-wing critics, who blame Obama’s policies for the continuing joblessness, private-sector jobs have increased at a faster rate than they did early last decade under George W. Bush, when government was cutting taxes on the rich and doing little to regulate business, according to research by Josh Bivens and Isaac Shapiro of the progressive Economic Policy Institute.

But unlike all other post-World War II recovery periods, public sector jobs have been declining since the recession officially ended—a loss of 430,000 jobs through May that forcefully offset creation of 980,000 private jobs. Indeed, rather than public employment stabilizing and stimulating the overall job market as in the past, the continuing loss of public jobs—mainly in local government but last month including federal government as well—drags down employment and recovery.

Economist Heidi Shierholz reinforces Bivens and Shapiro’s analysis in a new paper on Ten Facts About the Recovery.  She stresses that the few bright spots in labor market statistics reflect a decline in layoffs (now below numbers laid off in pre-recession years), not an increase in hiring (which remains stuck far below pre-recession levels). Contrary to conservative analysts, the primary problem with the labor market is lack of job openings for those already laid off in all major industries, not a lack of skilled workers for employers who want to hire. As a result, underemployment also has not lessened much, nor has the share of working-age people who are employed moved from record post-Depression rates.

And with 14 million people looking for work (many more, actually, who want work), real wages are below pre-recession rates and likely continuing to decline for many years for those who still have a job—as CEO pay has rebounded to old heights.

Here are Shierholz’s ten facts, illustrated in her report with compelling charts and graphs:

1. The real gap in the labor market is now around 11 million jobs.

2. Job growth this recovery outpaces that following the 2001 recession, but is still too slow.

3. The loss of public-sector jobs is a huge obstacle to growth in this recovery.

4. Most of the improvement seen this recovery consists of a decline in layoffs, not an increase in hiring.

6. The share of the working-age population with a job has not yet improved.

7. “Underemployment” has also improved very little in the recovery.

9. Racial and ethnic minorities have fared worse than whites in both the recession and the recovery.

The evidence suggests that measures the White House, a Democratic Congress, the Federal Reserve, and even to some extent the Bush administration took to expand demand and to stabilize banks, the auto industry and other elements of the economy not only avoided a deeper catastrophe. The deficit spending, aid to states, expanded unemployment benefits, infrastructure spending, clean energy and efficiency investment and other measures also stimulated a stronger recovery than Bush and Republican policies did after 2001. They were too limited in size and, largely thanks to conservative opposition, too limited in duration, but they headed in the right direction.

Now Republicans have largely neutralized or ended all those contributions to job creation, even limiting long-term unemployment benefits, especially for those newly laid off. Groups representing American builders and manufacturers responded to the June job figures with calls for more spending on infrastructure and research, which Republicans want to cut.

At the state level, reinforced by federal failure to help state and local government, Republican—and growing numbers of Democratic—governors are slashing jobs, pay and rights of state workers, but city workers—such as teachers—have suffered the greatest losses.

Few good ideas are even getting a hearing, but there is at least new legislation to fund work-sharing policies, which would have slowed layoffs if more states had active plans earlier. The proposal could still keep people on the job part-time with pay supplemented from unemployment funds, benefiting both workers and employers.

But between a confused, misguided and conciliatory White House and a venal, irresponsible and ideologically driven Republican party waging unrestrained attack on working-class and most middle-class families, the prospects for good policy—or much-needed jobs—are as bleak as June’s job report.