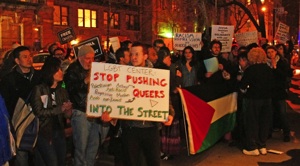 When the Lesbian, Gay, Bisexual and Transgender Community Center, located on West 13th Street in Greenwich Village, imposed an “indefinite moratorium” early last month on pro-Palestinian groups using their meeting spaces, the center’s leadership hoped to put the controversy over Palestine solidarity organizing there to rest. Instead, the center has stirred up a hornet’s nest of radical queer activists and their allies who are calling attention to the moratorium and demanding that it be reversed.

Two newly formed groups, Queers Against Israeli Apartheid (QAIA) and Queers for an Open LGBT Center (QFOLC), are turning up the heat on the Chelsea-area center, making New York the latest battleground over Israel within LGBT communities.

Demonstrations, sit-ins and pickets have greeted the LGBT Center in recent weeks.

Queer Palestine solidarity activists are angry at what they call “censorship” at a community center that has caved to Zionist donor pressure. Activists also say that the center’s response to their protests has disappointed them. For example, activists say the LGBT Center hired private guards in response to a March protest.

“The center [leadership has] betrayed the mission of the center. They have turned their backs on the community that they claim to serve, and they are excluding, expelling and banning people from the center based purely on their political perspective,” said Pauline Park, a founding member of QFOLC and a prominent transgender rights activist.

Hours after Lucas’ call for a boycott, Glennda Testone, the LGBT Center’s executive director, announced that the party was canceled. The fundraiser, which was eventually held at Queens Pride House, where Park is on the board of, was for Siege Busters, a New York-based Palestine solidarity group with many queer activists. Siege Busters had been meeting at the LGBT Center since August 2010 without incident.

“The same forces that are trying to paint Israel as a gay haven so that people will forget about the occupation are the same people and lobby groups pressuring the center,” Emmaia Gelman, a member of both QAIA and QFOLC, told The Indypendent during a June 8 sit-in at the LGBT Center.

At a March 13 community forum, Testone told the audience that the Siege Busters event, which raised money for the upcoming second “Freedom Flotilla” to Gaza, was canceled because it was “controversial” and “not LGBT-focused,” according to the Gay City News. While Testone did not mention donor pressure as a reason, queer activists say it’s clear what prompted the canning of the Siege Busters event.

“The center has always been a place for all sorts of people to meet at,” noted John Francis Mulligan, a longtime queer activist and member of QAIA. But now, “the current leadership of the center are not sticking by that mandate.”

Cindi Creager, the center’s director of communications, told The Indypendent in an email that they “are not doing interviews at this time.”

After the embroilment around Siege Busters, QAIA applied to rent space at the LGBT Center, and the request was granted because they were an LGBT group and they signed a new “non-discrimination” pledge. But after they met on May 26, Lucas denounced the center again.

In an email published online, Lucas wrote that the center was an “anti-Israel nest” and called on people to lobby government officials to cut funding off to the center, and proposed paying for a New York Times ad. Although the center denies that elected officials contacted them, Stuart Appelbaum, the openly gay Israel booster who heads the Retail, Wholesale and Department Store Union, told Gay City News that he was “aware of offices of elected officials reaching out to try to save the Center from itself…People at every level said they were going to call to find out what was going on.”

According to their 2009 filings with the Internal Revenue Service, the last year available, the center receives around $3 million in government funding.

By June 3, the LGBT Center issued another statement, this time announcing the moratorium.

“We must keep our focus squarely on providing life-changing and life-saving programs and services to the LGBTQ community in New York City,” Testone said in a statement posted online. “We respect those who are deeply passionate about these issues, and we respectfully ask that they take meetings outside of the Center.”

QAIA has taken direct action against the policy by organizing unauthorized “sit-in” meetings like the one on June 8.

Queer activists in solidarity with Palestinians’ struggle against the Israeli occupation see the battle over the LGBT Center as the latest front in what they call Israel and its advocates’ “pinkwashing” campaign. “Pinkwashing” refers to efforts by Israel to promote itself as a liberal democratic promoter of gay rights in the middle of an anti-gay Middle East in order to cover up its occupation of Palestine. The controversy in New York mirrors one in Toronto, where the mayor threatened to withhold funding from the city’s gay pride parade if a different Queers Against Israeli Apartheid group participated.

Palestine solidarity activists say they plan to keep up the pressure. Another unauthorized sit-in is planned for early next month, and Queers Against Israeli Apartheid continue to march as a contingent in gay pride parades around the city. On June 20, a picket was held outside a fundraiser for the center.

The center’s actions are “really meant to silence those who are doing pro-Palestine solidarity work in the LGBT community,” Park said.

For more information about Queers Against Israeli Apartheid (QAIA) and Queers for an Open LGBT Center (QFOLC), visit queersagainstapartheid.org and openthecenter.blogspot.com.