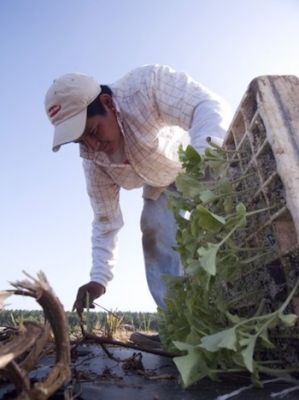 Like many ‘worthy cause’-themed documentaries, especially those produced with high-profile activist/philanthropist backing, The Harvest operates less as a film than as an audiovisual petition, the prosaic, formulaic aspect of which diminishes its impact. In addition to celebrity executive producer Eva Longoria, several of the main players behind this project (Rory O’Connor, Albie Hecht and Susan MacLaury, director U. Roberto Romano) are seasoned, award-winning figures in the field of human rights movie-making.

The Harvest traces the experiences and perspectives of three child migrant workers – Zulema Lopez (12), Victor Huapilla (16) and Perla Sanchez (14) – as they travel around the country with their families in search of crops that need picking. They have been doing this grueling, often dangerous manual labor – twelve-to-fourteen-hour days in 100-degree heat, exposed to pesticides – since the age of seven or eight, committing themselves to their parents’ and grandparents’ struggle for subsistence.

The most moving aspect of these stories is also the most tragic: the extraordinary bond of mutual responsibility that ties family members together, yet keeps them locked in the same hopeless, hardscrabble routine year after year, generation upon generation. Zulema’s grandmother and mother are adamant about enabling the children to escape this vicious circle, but the odds stacked against such heartfelt resolve prove insurmountable, because the only prospect of work lies where the next crop awaits harvesting and requires a life of constant travel, which denies the youngsters a stable education. (The school drop-out rate among children who are migrant workers, we are informed, amounts to four times the national average.)

Their displaced existence moreover forces them to mature fast, outside the comfort zone we tend to associate with childhood. You won’t often hear a more pragmatic-sounding twelve-year-old than Zumela, who nurtures no dreams, and believes she may at best one day find certain goals to aspire to. Perla is more ambitious; she wants to become a lawyer, so she can help improve the lot of her people. Victor looks forward to the day when he’ll be able to tell his own kids that he used to work in the fields. The Harvest arouses the most interest when it brings out the indomitable individuality of the three protagonists, not when it implicitly marshals them to sensitize audiences to the concerns of the CARE Act (Children’s Act for Responsible Employment).

The need for a campaign that supports this piece of legislation, geared to end the exemption of agricultural employment from the regulations stipulated in the 1938 Fair Labor Standards Act, stands to reason. Given its political agenda, though, The Harvest would have benefited from a more overtly politicized stylistic approach to the subject. Romano’s stated aim of making the narrative as organic and minimally invasive as possible does not account for the grating doses of picturesque vistas, didactic title cards, solemn fades-to-black, rote musical accompaniment and staple montage sequences of road movie tracking shots he layers on. Why downplay the screen presence of the harvesters’ lives by giving them the Lifetime treatment?