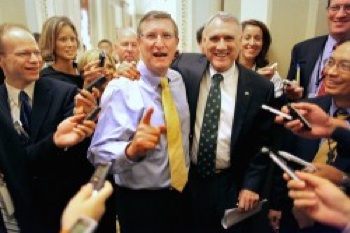 While President Obama has been preoccupied with frantically positioning himself as a centrist capable of slashing the deficit, his administration seems to have been devoting little thought to how to stimulate the economy.

Even with the economy allegedly in “recovery,” the unemployment rate still stands at 9.2 percent under the most commonly-used figure, and 16 percent under the more useful U-6 statistic that includes those who have given up the job search or are under-employed. The economy is floundering because of a severe lack of demand, as corporations sitting on $1.9 trillion in savings see no reason to invest in producing goods and services that ordinary consumers cannot afford to buy because income in the United States has become so heavily concentrated at the top.

One obvious cure would be a big stimulus programs like rebuilding America’s eroding infrastructure. But the GOP is entrenched against any new government spending, no matter how efficient or vitally needed. Why should they vote for a stimulus that would enhance Obama’s reelection chances in 2012?

So the Obama administration is looking with increasing urgency at a reduced payroll tax deduction for Social Security that would put more cash into the hands of consumers and small businesses. But this strategy carries a major danger of creating a false sense of crisis, as economist Dean Baker points out.

Social Security is currently in sound shape and is not projected to undergo any shortfalls until 2037. Before that point, as labor attorney and author Thomas Geoghegan has compellingly argued, simply taxing incomes above the current Social Security cap of $106,800 would cover future shortfalls.

Thus, the Obama administration feels a strong temptation to begin a tax break on Social Security deductions—but this would lead it down a perilous path, as Baker argues:

An extension of the payroll tax cut into 2012 is the most likely form of stimulus currently on the table in negotiations between President Obama and Congress. This would mean extending the 2 percentage point reduction in the employee side of the payroll tax for another year.

If the current arrangement is left in place, the Social Security trust fund will be credited with an amount equal to the tax cut so that the program’s finances are left unaffected.

This raises the possibility that Republicans will try to keep the lower Social Security tax rate in place indefinitely. If there was a commitment to permanently replace the program’s shortfall with general revenue, the loss of the payroll tax revenue would not matter. However, there is no such commitment. Obviously the Republicans want to reduce Social Security’s revenues so that they can turn the fictional Social Security crisis into a reality.

In principle, this would be a reasonable form of stimulus. ….However, there is a serious political problem with tying the tax cut to Social Security. While the deal is that the trust fund will be unaffected by the tax cut, the question is what happens when the extension ends. Several Republicans in Congress have already publicly said that they would oppose restoring the payroll tax to its former level, since that would be a tax increase. And increasing taxes is the most deadly sin for many Republicans.

The Times editorial complains that the likely deficit deals to be produced in the days ahead will not feature “significant future savings from Medicare, Medicaid and Social Security — the entitlement programs whose growth as the population ages is driving long-term projections of unsustainable debt.”

The newspaper also bemoans the lost opportunity to rise the Medicare eligibility age to 67, a position that Baker thoroughly skewers:

The projected increase in the cost of the Medicare and Medicaid is much larger but this is attributable to the projected explosion in private sector health care costs. If the United States faced the same per person health care costs as any other wealth country we would be facing long-term budget surpluses, not deficits.

This fact is important, since it suggests that the more obvious way to reduce the costs of these programs is to fix the U.S. health care system. This would imply lower payments to drug companies, hospitals, doctors and other providers. Alternatively, Medicare beneficiaries could be given the option to buy into the more efficient health care systems in other countries.   If these options were presented to the public it is likely that most would find it preferable to denying care to patients as the NYT advocates in this piece.

Unfortunately, President Obama is currently reflecting his political fears rather than economic realities. Increasingly out of losing with his base and basic Democratic commitments, he has been yielding to the common wisdom popular among Beltway elites in Washington, D.C., as Baker outlines:

President Obama is proud of the fact that he was willing to bargain away the core of the country’s social safety net to reach an agreement with the Republicans on the debt ceiling.

According to accounts of the negotiations, he had agreed to rise the eligibility age for Medicare to 67. He had also agreed to a change in the cost-of-living adjustment formula for Social Security that would reduce benefits by an average of more than 3 percent. This is in addition to the cuts in Medicaid and other programs that would also have been part of the deal.

Last night’s address on the budget-ceiling debate displayed the Obama team’s pathetic negotiations with the Republicans, wherein all the concessions are coming from the Democrats.

But it also revealed how President Obama truly believes that “compromise” itself is a principle that Americans care about more deeply than finding work at a decent wage and benefits.

Without President Obama regaining his political bearings and showing a new commitment to the three fundamental safety-net programs won over the last 80 years by members of his party and the grassroots toil of labor and other activists, a payroll tax exemption is the wrong way to go.

This was originally published on Working In These Times.