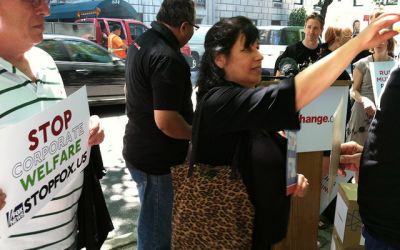 Demonstrators had plenty to protest yesterday in front of News Corp CEO Rupert Murdoch’s Manhattan home. Amid revelations of the UK’s News of the World phone hacking scandal, activists led by ColorofChange.org showed up at the media mogul’s front door to call for an end to FOX News’ flagrant race-baiting, as well as a Congressional investigation of Murdoch’s conglomerate News Corp.

Around 40 protesters and many more members of the press attended the 12:30 p.m. rally on 5th Avenue. After a speech from Rashad Robinson, where the Executive Director of ColorofChange.org* explained that for his organization and their allies, “It’s not just about the wiretapping, but it’s about the agenda, the ugly agenda that is focused on driving Americans apart.”

The protesters, holding signs that read “Rupert Murdoch Profits From FOX News Racism” and “Race Baiting, Phone Hacking, Anything For Profit,” then attempted to deliver a ream of paper with 110,000 signatures of citizens demanding that Eric Bolling, the FOX News host who claimed Obama chose to chug “forties” in Ireland instead of tend to tornado victims in Missouri and that the President has been hosting “hoodlum[s] in the hizzouse,” be fired. When the petition was brought to the doorman of Murdoch’s building near Central Park, he said that the building was “not accepting packages.”

Rashad Robinson explained to the crowd and cameras, “Rupert Murdoch is showing once again that he does not want to hear our voice.”

When reached for a statement, News Corp had “no comment.”

While delivery of the petition might not have been a success, calls for a closer look at News Corp practices by the federal government have been heard. Just today Attorney General Eric Holder announced that the Department of Justice would launch an investigation into whether or not News Corp has violated United States laws. An undisclosed source told CNN, “We’ll be looking at anyone acting for or on behalf of News Corp., from the top down to janitors.”

* Rashad Robinson is a board member at the Applied Research Center (ARC), which publishes Colorlines.com.

This article was originally published in Colorlines.com.