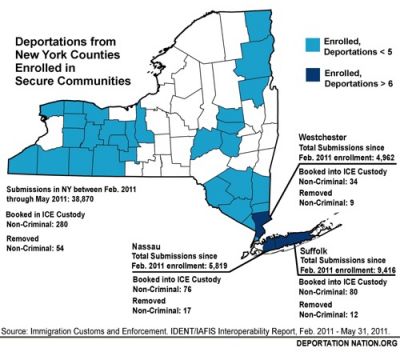 Last month New York immigrants and their allies breathed a sigh of relief when Gov. Andrew Cuomo announced that the state would no longer participate in the controversial Secure Communities program that lets federal agents know when city and state police arrest an immigrant who is eligible for deportation.

In a letter to Immigration and Customs Enforcement (ICE), Cuomo noted his administration had “received numerous complaints and questions about the purpose and implementation” of the program and said his greatest concern is that instead of targeting dangerous criminals it is “compromising public safety by deterring witnesses to crime and others from working with law enforcement.”

“We are very glad Governor Cuomo suspended it,” said Omar Angel Perez, Executive Director of the Workplace
Project/Centro de Derechos Laborales, which aids immigrant workers in Long Island. They were one of the first worker centers specifically for Latino workers in the United States.

Cuomo’s action followed more than a year of campaigning and signature-gathering by advocates calling on the state to suspend the controversial program. It was hailed by many as a victory for immigrant rights.

The suspension was supposed to deactivate Secure Communities in as many as 24 New York counties that had enrolled. But two days after its announcement, long-time immigration enforcement advocate, Suffolk County Executive Steve Levy, said police there will continue to participate anyway. It is unclear how Levy can override Cuomo’s deactivation of the program.

That worries Perez, who says he needs workers to file reports against employers who don’t pay them in order for him to help them fight wage theft and other workplace abuses.

“The impact of Secure Communities is that workers are afraid to report crimes,” says Perez.

Ten people were deported from Suffolk County since it joined the program in February, according to ICE records. Nine of them had no criminal record despite Secure Communities’ mandate to focus on people who pose a threat to public safety. This reflects the same pattern seen around the country. ICE maintains that it will deport anyone deemed eligible for removal once they are identified.

Nationwide, about 109,000 people have been deported after ICE took them into custody through Secure Communities. Out of those, ICE reported 60 percent were non-criminals or low-level offenders, while about 26 percent were charged with dangerous felonies. More than 70 percent of states and local law enforcement agencies are enrolled in the program – about 1,250 jurisdictions in 42 states.

NYC ENFORCEMENT
New York City and more than half of the state’s 62 counties have declined to enroll in Secure Communities.
Last December, NYPD Police Commissioner Raymond W. Kelly raised his concerns with the program when advocates were organizing for the city to oppose joining after then Gov. Paterson activated it.

“We want people to feel free to contact the police, to walk into police stations; communicate with the police,” said Kelly. “To the extent that [Secure Communities] may have some effect on that, that’s problematic.”

Congresswoman Nydia Velásquez (D-NY) said Cuomo did “the right thing” when he suspended the program. Her district includes parts of Brooklyn, Queens and Manhattan that have large immigrant communities such as Bushwick, Sunset Park and Chinatown. Velásquez was also part of a group of advocates who pressured Cuomo to withdraw from the program.

But some advocates want the city to go further. They note that the five boroughs and other cities have long collaborated with ICE through the Criminal Alien Program (CAP), which transfers immigrants held at Rikers Island jail into ICE custody. This led to the deportation of about 3,200 immigrants last year.

“People already feel afraid in certain precincts that are more aggressive in threatening people with deportation,” said Mizue Aizeki, with the Northern Manhattan Coalition for Immigrant Rights. “In some parts of Queens police say ‘I’ll throw you in jail and ICE is going to get you,’” Aizeki said she heard from immigrants she works with.

CAP is a national program available at all state and federal prisons, as well as city jails. ICE does not make public the number of state or cities participating at a national level. Participation in CAP is voluntary, according to New York City Department of Corrections director Dora B. Schriro. In a City Council hearing last November she said the city had no formal agreement with ICE.

“We’ve listened to what people said, concerns various state and community officials have raised, and we’re trying to address those head on,” said ICE Director John Morton.
One of the reforms gave ICE attorneys in immigration court the discretion to cancel a detainer — the tool used to request that local jails transfer an immigrant to ICE custody.

Morton also said ICE would no longer begin deportation proceedings against victims and witnesses of crimes, with a special emphasis on domestic violence victims.
But immigrant advocates like Aizeki said the reforms amounted to “superficial changes” and said they were disappointed that ICE did not issue a moratorium on Secure Communities.

“It’s an opportunity for them to seem like they’re doing something when they’re really not,” said Aizeki.

Renée Feltz and Stokely Baksh report on Secure Communities and immigration enforcement for DeportationNation.org, which features original stories, interactive timelines, videos and a library of resources.