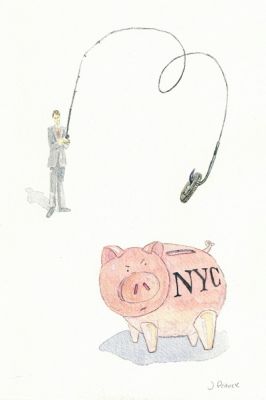 New York City-based Democrats in the State Assembly wanted to strengthen rent laws. Republicans in the State Senate sought a property tax cap for the rural and suburban districts where they hold sway.

The deal the two parties reached before the Legislature adjourned at the end of June seemed straightforward — provide relief for the 2.5 million New York City residents who still live in rent-stablized apartments and let upstate screw itself. “We’re trading one good piece of legislation for one horrible piece of legislation,” a State
Assemblymember from Brooklyn told me.

If only it were that simple.

While the rent law reforms turned out to be wholly inadequate (See “Tenant Denied,” page 3), the other half of this bargain — the property tax cap — will be profoundly damaging, but not only to the upstate communities that will find themselves starved for revenues to fund their schools and other essential public services.

The tax cap approved by the Legislature calls for property tax levies to increase by no more than 2 percent a year or the rate of inflation, whichever is lower. The bill allows for a local override with 60 percent of a municipal board vote or, for school districts, 60 percent of a public vote. It is set to expire in 2016 when it will come up for renewal in the Legislature. New York City, which funds its schools with income tax revenues, is not covered by it.

‘INVITATION TO DISASTER’
In an editorial, the New York Times called the property tax cap “an invitation to disaster,” noting that California set down a similar path beginning in the late 1970s under Proposition 13. Once a national leader in public education, California now rates near the bottom of the 50 states in both spending per pupil and achievement in grades K-12, below perennial bottom dwellers like South Carolina and Alabama.

The Fiscal Policy Institute and other progressive groups called for targeted property tax relief to assist those who need it most — home-owning households that earn less than $100,000 per year and pay 10 percent or more of their annual income in property taxes. But this was never seriously considered by Gov. Andrew Cuomo, Senate Majority Leader Dean Skelos (R-Nassau County), or Assembly Speaker Sheldon Silver (D-Manhattan). Instead, local governments will be left to grapple with mandated expenses that are increasing at a faster clip than a “hard” 2 percent cap can accommodate.

How will local upstate governments respond? Like New York City, they are already facing deep cuts in State aid in 2012 and beyond, so their choices will be stark. One possibility is to go to battle in Albany for a larger share of a shrinking pie.

New York City already sends more money to Albany than it gets back. Given Republican control of the State Senate and Cuomo’s indifference to the economic concerns of his New York City-based constituents (whose loyalty to the Democratic Party he can take for granted), it’s not hard to imagine upstate gaining a larger slice of State aid at the city’s expense.

The impact of the property tax cap will also create an opening to go after New York’s 1.1 million unionized public sector workers and their collective bargaining rights, in particular the Triborough Amendment.

TRIBOROUGH EXPLAINED
Reviled by conservatives, Triborough prohibits a public employer from altering any provision of an expired labor agreement until a new agreement is reached. It was enacted in 1982 to level the playing field in collective bargaining. Before Triborough, many employers took advantage of a ban on strikes by public workers in New York State to refuse to negotiate in good faith, leaving workers to watch helplessly as hard-won rights and protections expired with their contracts.

Public employees in the state of New York can go years without receiving a pay raise if contract talks stall. However, they cannot have concessions unilaterally imposed on them. Sweep away Triborough and cash-strapped local governments would be free to dramatically alter the terms and conditions of the employment of their workers once
existing contracts expire.

Right-wing groups like the Manhattan Institute and New Yorkers for Growth favor repealing Triborough, as does the New York Conference of Mayors and a number of Republicans in the State Legislature.

“It would be devastating,” said a union official who visits Albany regularly to lobby members of both parties. “All the provisions that protect members would not be there. Everything would start from scratch.”

MIXED SIGNALS
To date, the Cuomo administration has sent mixed signals on Triborough. In January, Larry Schwartz, a senior adviser to Cuomo, floated the idea of “freezing” Triborough for an unspecified number of years. After an outcry from unions, the Cuomo administration backpedaled. The mass protests of Wisconsin state workers that took off several weeks later didn’t hurt either.

Led by its public sector unions, New York has the largest concentration of unionized workers of any state in the country. An attack on Triborough would spark a furious response from union leaders who would turn to their Democratic Party allies for support, especially in the State Assembly. But, would that be enough?

Recent moves against public employee bargaining rights by Democratic legislators in New Jersey, Massachusetts, Connecticut and Illinois suggest the Democrats are not to be trusted. Here in New York, if you are a public sector employee, do you bank on Shelly Silver and the Assembly Democrats as your last, best hope? If so, ask tenant advocates what that gets you.