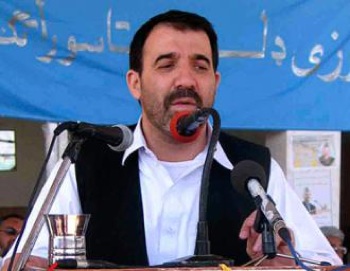 The increasingly shaky position of Afghan President Hamid Karzai–and the U.S.-led NATO occupation that props him up–was further exposed in July with the assassination of the president’s powerful half brother.

Ahmed Wali Karzai, who served as a regional strongman and U.S. collaborator in the southern province of Kandahar, was shot and killed in his own home by his long-time head of security. A few days later, four people were killed at a memorial service for the slain warlord, and just days after that, Jan Mohammed Khan, a close adviser to President Karzai, was killed along with a fellow member of the National Assembly when two gunmen attacked Khan’s home.

Meanwhile, on July 18, Afghanistan’s second-largest bank seemed on the brink of collapse, and Gen. David Petraeus handed over command of U.S. and NATO forces in Afghanistan to Marine Gen. John Allen.

All this prompted a flurry of gloomy media stories about the lack of progress after a decade of U.S. war in Afghanistan. For example, the Washington Post reported:

Petraeus ends his tour in Afghanistan without conclusive signs that the counter-insurgency strategy he helped design has turned the tide in the war against the Taliban. The more than 140,000 NATO troops under his command have weakened the insurgency in some of its key strongholds in the south, but other parts of the country remain dangerous, and Taliban leaders still operate with relative impunity from Pakistan…

The Afghan government, meanwhile, has failed to deliver meaningful services into much of the countryside or reduce the corruption that has disillusioned the Afghan people and forced repeated confrontations with its coalition partners.

In fact, the degree to which NATO troops have really weakened the Taliban in its southern strongholds is especially questionable following the assassination of Ahmed Wali Karzai, who was the best-known representative of his brother’s government in the south.

Not only has the recent spate of high-profile assassinations demonstrated that the Taliban is continuing its operations, even against the most highly guarded targets, but the death of Karzai’s brother–a key ally of the U.S.–will make it even more difficult to nurture whatever progress the U.S. can point to in southern Afghanistan.

Considering the Taliban may actually control as much as 70 percent of the country, the assassination is a sterling coup, with responsibility duly claimed by the Taliban…The Taliban anyway are already winning the public relations war. Since the spring of 2010, the Taliban have managed to kill the provincial chief of police of Kandahar, the deputy governor, the district chief for Arghandab and the deputy mayor of Kandahar City.

Now they [have gotten] rid of the major pro-Washington actor, not only in Kandahar but in the whole south of Afghanistan–where NATO has been involved en masse to crush the Taliban in their spiritual home and favored grounds. The assassination smashes to bits the hegemonic “NATO is winning” narrative.

The U.S. will no doubt struggle to find someone to step into even some of the roles that Ahmed Wali played for the occupiers. Not only was he loyal to his brother in Kabul, but U.S. officials considered Karzai a “stabilizing force” for the region–despite his neck-deep involvement in the opium trade and his notorious warlordism.

By the early 2000s, he was already a tribal leader and a CIA asset. While most of Afghanistan suffered terribly during the past decade of war and destruction, Karzai expanded his wealth and power. According to Escobar, Ahmed Wali carried on in these roles throughout the decade:

as well as owning hotels, real estate and even a Toyota dealership, but most of all struggling to “contain” Kandahar, always heavily Talibanized, as commander of the Kandahar Strike Force, a hardcore, private paramilitary group that helps U.S. Special Forces and the CIA in targeted assassinations of top Taliban commanders.

In 2008, the New York Times reported that massive heroin shipments uncovered by Afghan security forces were either released or not followed up on because of the connection between the Karzai brothers as individuals–and collectively with the Bush administration, which was internally divided (as the Obama administration has been) as to whether to count Ahmed Wali as an asset or a liability.

It’s not hard to understand the source of American ambivalence about Ahmed Wali Karzai. On the one hand, his command of lethal force through his paramilitary assassination squad was not just useful, but practically indispensable as the U.S. sought to uproot the Taliban during the Obama surge in Kandahar.

On the other hand, backing for warlords runs contrary to the U.S. strategy of winning hearts and minds in Afghanistan. “If we are going to conduct a population-centric strategy in Afghanistan, and we are perceived as backing thugs, then we are just undermining ourselves,” Major Gen. Michael T. Flynn, the senior American military intelligence official in Afghanistan, told the New York Times in 2009.

But druglord and warlord weren’t the only varieties of “lord” achieved by “AWK,” as he was known in U.S. cables and communiqués. He was also landlord to U.S./NATO occupation forces in Kandahar. According to the Times, in addition to being compensated for direct services provided to U.S. intelligence services:

Mr. Karzai is also paid for allowing the CIA and American Special Operations troops to rent a large compound outside the city–the former home of Mullah Mohammed Omar, the Taliban’s founder. The same compound is also the base of the Kandahar Strike Force. “He’s our landlord,” a senior American official said, speaking on the condition of anonymity.

In the end, Karzai’s success was also his undoing. In advancing the U.S. agenda–and enriching himself in the process–he also made countless enemies. And insofar as the Afghan population blames the U.S. for the country’s woes, some are drawn to the rhetoric of the Taliban. This may explain how the Taliban was successful in recruiting someone from Karzai’s inner circle, Sardar Mohammad, to carry out his killing.

Though Karzai’s family initially insisted the Taliban had no hand in the assassination, it’s now clear that Mohammad traveled to Quetta, Pakistan, within the past three months to meet with Taliban insurgents. According to the Washington Post:

He had also acted erratically in recent weeks, sleeping poorly, changing houses at night, acting suspiciously toward his men and demanding to know who they were talking to on their phones. “All of a sudden, he changed,” Mahmood Karzai said in an interview Thursday. “This is the work of the Taliban.”

A few days after Karzai was killed, the Taliban released a telling statement revealing its central motivation–not Karzai’s corruption and involvement with drugs, but his collaboration with U.S. and NATO forces. As Asia Times reporter M.K. Bhadrakumar explained:

Ahmed Wali obviously crossed the “red line” in helping U.S. commander General David Petraeus’ troop surge. The Taliban said he ‘played a key role in spreading the net of intelligence of the Western invaders and boosting their sway in southwest Afghanistan…'”

The Taliban statement makes it clear that the Quetta shura (the Taliban’s high council) could have overlooked just about any aberration in Ahmad Wali’s political profile–such as his strongarm methods as a “warlord” or even his alleged involvement in drug trafficking or embezzlement of funds from the central bank–but what they could not afford to tolerate was that he continued to be the CIA’s collaborator.

Thus, Petraeus’ elevation to CIA director may have been the catalyst for the violent end to Karzai’s life–the kind of violence he was accustomed to inflicting on others who got in the way of U.S./NATO aims in the region.

This article was originally published on socialistworker.org.