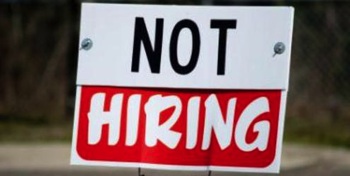 There was a lot of sharp media response to White House Communications Director Dan Pfeiffer’s contention that “The average American” does not view the economy through “the prism of GDP or unemployment rates or even monthly jobs numbers” and that next year, “People won’t vote based on the unemployment rate, they’re going to vote based on: `How do I feel about my own situation? Do I believe the president makes decisions based on me and my family?'”

That’s both cynical and silly. If one out of ten people seeking work can’t find any, it follows that the average person has a friend, relative or neighbor amongst them. All she or he has to do is look out the window or answer the phone to be scared.

There are now, more or less, 14,087,000 people unsuccessfully seeking work in the country today. The unemployment rate for African Americans came to 16.2 percent in June, the same as for May. This is compared to 15.4 percent this time last year, and 8.5 percent in June 2007. The highest jobless category is African American men: 17 percent. The mid-summer rate for Latinos is 11.6 percent, down from 11.9 percent in May and up from 5.6 percent in June 2007. The rate for black teenagers is holding steady at about 40 percent compared to a little less than 25 percent for young people overall. In the summer of 2007, teen unemployment was 16.3 percent.

The employment-to-population (EPOP) ratio fell to 58.2 percent, the low spot in December of 2009 and again in November in 2010. According to economist, Dean Baker, of the Center for Economic and Policy Research, “The decline in EPOPs hit most groups, but black women saw the sharpest falloff, with their EPOP declining by 0.9 percentage points to 52.8 percent, another new low for the downturn. The EPOP for black women is 7.8 percentage points below the pre-recession peak in 2007. The EPOP for blacks overall edged down by 0.1 percentage points to 51.1 percent, also a new low for the downturn.”

It goes without saying that these latest jobless statistics minimize the depth of the crisis. They don’t include the men and women working part time who would rather have a full time job, those entering the workforce looking for their first job or those who have left the active workforce in frustration.

“The United States is in the grips of its gravest jobs crisis since Franklin D. Roosevelt was in the White House. Lose your job, and it will take roughly nine months to find a new one,” Catherine Rampell wrote in the New York Times Sunday. “That is off the charts. Many Americans have simply given up.”

It should also go without saying that this situation should be considered a national emergency. But you would never think so listening to the big shot Democrats and Republicans that appeared on the weekend talk shows and at campaign rallies. Their talk was all about the deficit and the right wing’s perversion of the Democratic process by holding the Congress hostage and targeting President Obama for defeat at any cost.

Treasury Secretary Timothy Geithner did, however, warn us that it will be quite a while before it will feel like the economy is on the mend. For many of us “it’s going to feel very hard, harder than anything they’ve experienced in their lifetime now, for a long time to come,” he said on “Meet the Press”.

Other than that, most of the week’s commentary on the jobs picture has not been on how serious the crisis is or what might be done in response, but rather on how the job stats figure into prospects for the President’s re-election.

Surely, I am not the only one who is tired of hearing about the outlook for the 2012 election. The politicians should keep their grubby hands off Medicare, Medicaid and Social Security because it’s the right thing to do – regardless of the Democrats’ polling prospects. Likewise, it’s obscene to fashion a response to the worsening employment picture based upon the next election – equally so for the empathy-challenged Senate Republicans and the people in the big house on Pennsylvania Avenue.

The Republicans played the jobs question for all it was worth last year and they will play it again next year. In fact, with the release of the July statistics they have taken up the cry again. It’s not surprising. The rightwing in Greece and elsewhere in Europe have not shied away from sounding populist on the issue, especially where the left has been so far unable to advance a strong credible alternative argument against draconian austerity drives. The White House would seem to have adopted the Republican narrative when the President says he thinks the budget “deal” they are cooking up in the nation’s capital these days will lead to big business receiving “certainty” about the federal finances, prompting them to begin hiring people.

“There has never been any evidence that the federal debt is primarily responsible for the persistent joblessness that began with the 2008 recession,” the New York Times said editorially last week. “The numbers have remained high because of weak consumer demand and stagnant wage growth, along with an imbalance between jobs and job skills. epublicans have long tried to link unemployment and debt so that they can blame Mr. Obama for the poor economy, and build support for their ideological goal of cutting spending.”

“The president may have a nebulous approach to unemployment, but he is hardly indifferent to it. His re-election hinges on reducing it. It is hard to understand, though, why Mr. Obama has adopted the language of his opponents in connecting the economy to the debt,” the Times editors said.

When it gets around to the subject, the Administration is mainly pushing four ideas about how to deal with the jobs crisis: enactment of pending foreign trade pacts of dubious merit, creating jobs by repairing the nation’s infrastructure, extending a payroll tax cut that presumably will lead to people spending more on something other than increasing medical care costs and gas prices, and making it easier for entrepreneurs to get patents.

“To his credit, he talked about the one step that would work – investing money in rebuilding the country,” said the Times last Sunday.

Frankly, some of us are tired to hearing about it, thinking it’s time to dust off that old picket line slogan: “Never mind your promises, we want action.” For, as the editorial said, “the debt-ceiling ideas he is now considering would make that investment much less likely by pulling hundreds of billions of dollars out of the economy at precisely the moment when the spending is needed most.”

The President once proposed spending $53 billion for high-speed rail over six years, but then turned around and made a budget deal with the Republicans that killed off such a
prospect. The White House keeps talking about an infrastructure bank; we’ll be convinced when the vaults are filled and the cashier windows open.

It’s time to put a rest to the contention by Republican-inclined pundits that the November 2010 Congressional election victories of the GOP were a mandate for deficit reduction. “Obama has let the Republicans dominate the narrative. They have been brilliant in defining the narrative away from jobs, which is what got they the bigvictory, back to spending,” Norm Ornstein of the hardly liberal American Enterprise Institute told the Financial Times last week. One poll last week found that only 38 percent of the people in the country approve of the way the Administration is handling the jobs crisis.

On “This Week” on ABC White House chief of staff, William M. Daley predicted that the President will continue to promote a big “deal” to move the deficit negotiations forward. “Everyone agrees that a number around $4 trillion is the number that will make a serious dent in our deficit,” he said. “He didn’t come to this town to do little things. He came to do big things.” Could be that the White House has some big thing in mind to put people back to work – the sure way to rescue the economy from the present quagmire – but there’s no evidence that’s the case.

BlackCommentator.com Editorial Board member Carl Bloice is a writer in San Francisco, a member of the National Coordinating Committee of the Committees of Correspondence for Democracy and Socialism and formerly worked for a healthcare union. Carl is also one of the moderators of Portside.