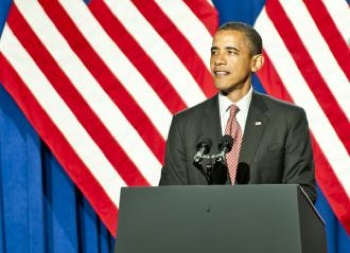 CAN someone please remind us why the Democrats are so often called “the party of the people?”

There’s Social Security, of course–the cornerstone of the 1930s New Deal social programs created during the presidency of Franklin Delano Roosevelt. The popularity of Social Security is such that no Democrat would ever dream of offering it up to the Republican budget-slashers.

Except that Barack Obama has now done so.

Then there’s Medicare, a signal achievement of President Lyndon Johnson’s Great Society social programs. No Democrat could conceivably line up with the right to take aim at the widely supported health care program for the elderly.

Not until, that is, Barack Obama slashed Medicare in the name of health care “reform”–and then bowed to Republican demands for far greater cuts in the future.

What about support for organized labor? That’s a principle that clearly differentiates Democrats from Republicans, right? But Obama himself green-lighted the attack on public-sector workers, freezing federal workers’ pay for three years and pushing the Race to the Top education program to promote teacher-bashing state legislation–and he turned his back on private-sector unions after promising to support the Employee Free Choice Act to make organizing unions easier.

Surely, economic policy differentiates Democrats and Republicans? Where the Bush administration in 2008 rushed to provide $700 billion to bail out Wall Street, while leaving working people to suffer the brunt of the economic crash, the Obama administration…continued the endless bailout of the bankers, and has done little more for the millions who face foreclosure or the almost 20 percent of the workforce that’s either jobless or underemployed.

The Democrats are on the record supporting women’s rights–in particular, the right to choose abortion. But as a growing number of state legislatures pass laws that further curb access to abortion, the Obama administration has done nothing to counter the trend. And when Obama’s own pro-choice views were the subject of controversy at a University of Notre Dame speech in 2009, the president failed to even state his position in favor of abortion rights.

What about civil liberties? Surely Obama has provided some relief from the Bush regime’s shredding of basic rights under the banner of the “war on terror.”

Only he hasn’t. Instead, Obama has continued and even expanded virtually the whole of the Bush-Cheney approach to the war on civil liberties.

While George W. Bush offered a future of endless war in Arab and Muslim lands, the Obama administration no longer justifies U.S. military action in the name of a “global war on terror.” But the wars continue anyway, with downsized but enduring occupations in Iraq and Afghanistan, plus a new war in Libya, launched with U.S. missiles and planes and supported by the U.S. through the NATO military alliance.

All this from the leader of what is supposed to be the mainstream party of the “left” in U.S. politics.

MANY people are justifiably upset at the Obama administration’s compromises, retreats and outright sellouts, and blame the president for being too weak in the face of the Republicans’ corporate-funded, Fox News-scripted backlash against even the most modest liberal measures.

But the reality is that Obama’s policies are perfectly consistent with the Democrats’ long tradition of making promises to their working-class base at election time, but delivering the policies demanded by the bankers, CEOs and Pentagon brass. Because while the Democrats depend on workers and the poor to turn out to vote, they’re just as much a pro-capitalist party as the Republicans.

To be sure, Obama has made concessions to the right that were unnecessary even from the narrow viewpoint of the most cynical Democratic political operative. By contrast, Franklin Roosevelt was willing to stand up to a business establishment that had been discredited by the Great Depression, declaring at one point during his re-election campaign that he “welcomed their hatred.” Obama, on the other hand, bowed to business on every question–and then bowed some more.

But at the same time, Roosevelt rightly considered himself, as he also once said, “the best friend the profit system ever had.” The pro-working class measures that Roosevelt is credited with introducing were the result of a labor rebellion that shook the U.S. in the 1930s and led to the unionization of much of U.S. industry in just a few years. Plus, Roosevelt was also prepared to turn his back on unions–for example, during the bitter 1937 strike for union recognition against so-called “Little Steel.”

And it was Roosevelt who used the Second World War to advance the American empire, backed up by his successor Harry Truman, who ordered the atomic bombs dropped on Hiroshima and Nagasaki and later launched a war on the Korean Peninsula to ensure U.S. dominance of the Pacific. It was to maintain that control that John F. Kennedy and Lyndon Johnson sent more than half a million U.S. troops to Vietnam in the 1960s to fight wars that led to the deaths of 4 million Southeast Asians.

The next Democrat to occupy the White House, Jimmy Carter, has since become known as an advocate for human rights. But in office, Carter didn’t try to repeat Johnson’s attempt to have “both guns and butter”–the effort to combine the pursuit of U.S. imperial aims with expansion of the social safety net to widen the Democrats’ electoral base. Instead, Carter cut the budget for social programs and ramped up military spending–a trend that would continue when Republican Ronald Reagan took over the Oval Office.

Carter’s right turn couldn’t be explained just by the fact that he came from the conservative Southern wing of the Democratic Party. That was true of Johnson as well. Instead, the party’s shift to the right beginning in the late 1970s was the political consequence of the end of the long economic postwar boom, during which living standards rose for most working-class people.

The Democrats’ move to the right as the ’80s and ’90s dragged on didn’t go unchallenged. The civil rights movement led to increased prominence for African American political leaders in the party–Black politicians won seats in Congress and control of City Hall in a number of important cities. Rev. Jesse Jackson’s presidential campaigns in 1984 and 1988 seemed to provide a vehicle for more liberal forces in the Democratic Party.

But the overall trajectory of the Democratic Party was in the other direction–with the party establishment working to marginalize liberals and make the Democrats more business-friendly. Enter the Democratic Leadership Council (DLC)–a group formed in the mid-1980s by conservative Democrats as an internal pressure group to pull the party to the right.

Arkansas Gov. Bill Clinton was a founding member of the DLC. As president, Clinton earned the ire of the rich for raising their taxes–but soon enough, he fully embraced the Wall Street agenda of his adviser and later Treasury Secretary Robert Rubin.

Clinton’s plans for health care reform died in a Democratic Congress before even coming to a vote, and when the Republican Revolution of 1994 took back control of the House and Senate, Clinton moved even further right. Rather than expand the social safety net, he cut it dramatically, ending the federal welfare program and replacing it with state-run “workfare” programs that compelled recipients to work for low wages to get benefits that were no longer guaranteed by federal law.

Clinton hewed to this conservative line despite the promised “peace dividend” that was supposed to follow the collapse of the USSR and the end of the Cold War. In the 1990s, the Clinton administration undertook what former military officer and author Andrew Bacevich called “the unprecedented militarization of U.S. foreign policy” as the U.S. drove the expansion of NATO into the former Russian sphere of influence and twice intervened militarily in the Balkans.

As president, faced with the worst economic crisis since the 1930s, Obama was willing to push through a $787 billion economic stimulus program that was big enough to prevent an outright depression, but not nearly substantial enough to stop the deterioration of living standards faced by tens of millions of workers who had voted for him.

In stark contrast to his campaign slogan of “Change we can believe in,” Obama’s top priority was tending to the interests of business. Like so many party leaders before him, he assumed the Democratic base had nowhere else to go. In the resulting demoralization, millions of those voters stayed home in the 2010 election, giving a whipped-up Republican base the chance to retake the House and set the political agenda.

Obama has shown no hesitation in getting with the program since the Republican victory last November. While the Republicans’ proposals for cuts are savage and overwhelming, Obama poses as a responsible steward of the state, “protecting” Social Security and Medicare by backing cuts he portrays as more reasonable–even though they go further than what any Republican president has so far dared to propose.

Obama’s behavior isn’t unique to national politics–just look at the policies of Democratic governors in California, Illinois, New York, Oregon and Connecticut, where social spending is being slashed and public-sector unions are under attack. In fact, political leaders around the world–whether from center-left parties or traditional conservative ones–are embracing austerity under pressure from big business.

All this points to the need for independent working-class politics in the U.S. While the formation of a new political party isn’t on the agenda, what has to be tackled now is struggle against the austerity, whether pushed by hard-right Republicans like Wisconsin Gov. Scott Walker and House Speaker John Boehner or Democrats like Obama or New York Gov. Andrew Cuomo.

The political consensus of the capitalist class is clear, and both parties are falling into line. Our side needs to step up to the challenge.

This was originally published on SocialistWorker.org.