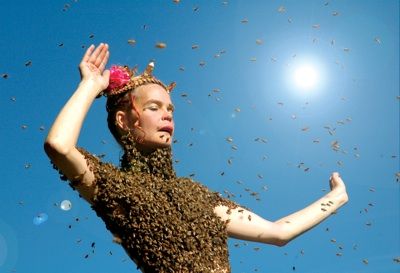 Queen of the Sun
Directed by Taggart Siegel
Distributed by Collective Eye, Inc.

About four years ago the world started noticing that bees were disappearing in large numbers. In the United States, Europe, Australia and New Zealand, beehives were being left empty with no explanation. While bee stocks have been on a global decline since the mid-1970s, this rate of disappearance — between 30 and 70 percent was unprecedented and frightening.

The phenomenon, which now has a name — colony collapse disorder (CCD) — is described in Taggart Siegel’s documentary Queen of the Sun. It’s a lush, gorgeous film, a tender love letter to the honeybee. But while it names CCD as the symptom of a larger problem facing honeybees, and touches on its many man-made causes, it left me no more optimistic about our means to save the bees than I’d been before seeing the film.

Bees are unusual among insects by being, as one Italian farmer describes them in the film, warm and fuzzy — even seductive. While in ecological terms, the broad disappearance of insects is an indicator of environmental damage and a warning of trouble farther up the food chain, it doesn’t reach the same alarm in the popular food chain as, say, the plight of the endearing polar bears or pandas. (Various sectors of the environmental movement have been criticized for pandering to popular  preference for large and easily lovable mammals and birds.)

Nonetheless, dire concern over the bees’ disappearance is justified precisely because they’re so crucial to human existence. The food writer Michael Pollan estimates in the film that 40 percent of all the food we eat depends on bees for reproduction. (Raj Patel, Vandana Shiva and Gunther Hauk also chime in with their thoughts on global agriculture and food systems.)

The documentary’s strengths are largely visual. Through interviewing many beekeepers — some professional, some hobbyists — we’re treated to a dazzling montage of hives, honeycomb, flowers and affectionately buzzing bugs. The film is an important introduction to the human-bee relationship, which is about 10,000 years old. While it provides some historical context (the ancient Egyptians revered honeybees, and until the 19th century selling honey was illegal in many places), it does so through the words of the scientists and beekeepers, and their love for and dependence on these creatures shine through.

In addition to the charismatic honeybees that are the film’s focus, there are about 20,000 other species of bees in the world who are equally crucial to plant pollination, and some of them are in danger as well. The predictable villains of modern agriculture all make an appearance — genetically modified crops, whose genes make their way into the honeybees and their honey; monoculture, which is impossible to pollinate naturally; and pesticides, all of which a few years ago depleted the United States’ stock of bees to the point that, in 2005,  we started importing bees from Australia. Despite these numerous threats to bees — and by extension humans, and despite the many unexplained and poorly understood causes of the bees’ disappearance, Queen of the Sun avoids the gloom-and-doom so prevalent in documentaries. It opts instead to reveal a magical ecosystem that straddles the natural and commercial world, betting that once we see what we’re endangering, we’ll fight hard to save it. Here’s hoping they’re right.