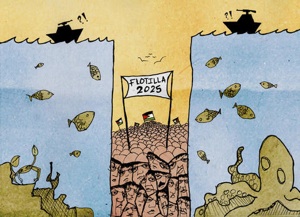 The story of the second Freedom Flotilla is not over. Israel and the international community have deployed multiple deterrent tactics, falsely accusing participants of terrorism, chemical warfare and plans to murder Israeli soldiers. Boats have been sabotaged, boarded and blockaded with crews and owners arrested.

Last year’s violent assault on the Mavi Marmara, which included summary executions, torture and theft, remains the starkest recent example of Israel’s tactic of deterrence towards solidarity activists trying to break its hold over Palestinian territory. But is it working?

Exposure of all of the above and the rules by which they can be challenged and changed (international law) is immediately reduced by defenders of Israeli exceptionalism to an act of war — what they have begun to call “lawfare.” For Israel, the application of international law is something to be deterred, which means promoting an “exceptionalist” narrative. Israel’s right to defend itself trumps all laws and conventions and human rights, because it is a special case, facing oppositional threats which are exceptional and unique.

Therefore, unilateral force and disproportionate force can be applied in order to deter anything or anyone that challenges the illegitimate actions of Israel, whether it be Palestinian political parties or unarmed civilians or paramedics rescuing the victims of Israeli deterrence. The full force of this was seen during Israel’s three weeks of attacks in winter 2008-09, dubbed Operation Cast Lead, and which was brought to bear on the inhabitants of Gaza who dared to hold on to a vision of a free Palestine and a right of return.

It’s not only Palestinians struggling for their freedom who have been targeted. Israeli soldiers exposing the army’s human rights abuses with the group Breaking the Silence speaking out against war crimes, activists with the International Solidarity Movement and Israeli and international activists promoting the strategy of boycott, divestment and sanctions (BDS) have been targeted, as have journalists wishing to report on the flotilla. They have been subjected to the policy of deterrence with threats of fines and jail, ten-year-long bans and deportation. Several international activists have also been murdered by Israeli forces. Israel’s actions suggest that the diversity of voices and forces opposing Israeli impunity and illegality have no right to exist and must be silenced, deterred from activism, reporting and revealing.

The second Freedom Flotilla challenges this doctrine head-on. In the case of the occupation and blockade on Gaza, this action represents a global democratic movement of delegitimization of the illegal blockade. The Freedom Flotilla has played outside the worn-out chessboard of diplomatic state maneuverings, negotiations and lobbying.

The lesson learned from Greece serving as Israel’s mercenary by intercepting the flotilla boats shows the lack of democracy, autonomy and accountability states have when pressured by the bullies of the global school-yard. However, it also shows the power democratic movements have in creating scenarios and actions which propel them into the arena of state-level politics and force these actors to have to deal with democracy from below.

In Egypt and Tunisia, the people won changes but the struggle is ongoing. The flotilla has also helped win changes — albeit cosmetic ones — in easing the siege. Last year Israel increased the number of items allowed in to Gaza and the Rafah border was opened, in early June of this year Israel permitted reconstruction material into Gaza for 1,200 homes and 18 schools for the first time since the blockade was enacted (“Israel approves 1,200 new Gaza Strip homes,” Associated Press, 21 June 2011).

The flotilla has also forced Israel onto the defensive and into a hasbara (propaganda) overdrive, which it has not won. An attempt to smear flotilla organizers as homophobic was exposed as a hoax and claims of the blockade as necessary for defence and of no humanitarian crisis in Gaza discredited by Wikileaks and the UN agency for Palestine refugees (UNRWA) respectively (see “Wikileaks: Israel aimed to keep Gaza economy on brink of collapse,” Reuters, 5 January 2011 and “UNRWA: Gaza blockade anniversary report,” UNRWA, 13 June 2011).

It has also exposed the hypocrisy and fake democracy of states which continue to treat respect for international law as a policy issue rather than an obligation.

The affect of the flotilla action is cumulative, building on decades of Palestine solidarity struggle as well as last year’s effect of creating pressures, profile and political space that have given Palestinian activists more agency, voice and access to mainstream media and spheres of power for their case for freedom. It’s not the audacity of hope which drives this movement but an audacity of practical, confrontation direct action that takes hope in hand and moulds into a tool sharp enough to penetrate political discourse at the highest level.

The pseudo-democracies of Israel, Greece and US bare their teeth, sending in the tanks, masked commandos and armed guards when threatened by real democracy from below. What the flotilla has shown, as have the Arab uprisings and all movements for justice is that it is only real democracy, people worldwide taking matters into their own hands, which creates the conditions for true change.

The moves and counter-moves of Israel, Greece and other powers teach us that this is a continuous and intergenerational struggle that will require multiple tactics and dimensions, by land, sea, air and cyberspace, in constant adaptation, flexibility and ever more audacious and tenacious ideas. These democratic movements are undeterred.

Ewa Jasieiwcz is an activist and writer and member of The Polish Campaign of Solidarity with Palestine (Kampania Palestyna).