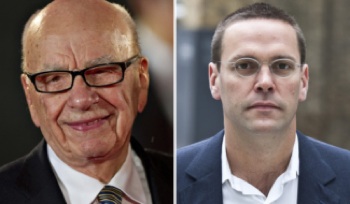 It just keeps getting dirtier and dirtier—and that was before yesterday morning’s report that Sean Hoare was found dead in his home. Hoare, a former show business reporter at the News of the World, was the first on-the-record source to allege that British Prime Minister David Cameron’s director of communications, Andy Coulson, actively encouraged reporters to hack into the voicemail accounts of celebrities when he was that paper’s editor. According to a statement by Hertfordshire police: “The death is currently being treated as unexplained, but not thought to be suspicious.” Phew!

Today, (Tuesday, July 19) the billionaire tyrant Rupert Murdoch and his son and designated successor James will testify before the House of Commons Culture, Media and Sport Select Committee. Rebekah Brooks, the former head of News International, Murdoch’s British subsidiary, was also supposed to testify but now may not since she was arrested over the weekend.

Also over the weekend Sir Paul Stephenson, the head of the Metropolitan Police, resigned after it emerged that he had hired Neil “Wolfman” Wallis, a former deputy editor at Murdoch’s now defunct Sunday tabloid the News of the World, as a publicity consultant to the police force. Wallis, who was himself arrested last week, also did public relations work for a health spa favored by Brooks, and which comped the £12,000 cost of the chief’s five-week stay while recovering from surgery this past January. This morning also brought the news that Stephenson’s number two, John Yates, also resigned after Parliament’s Home Affairs committee said it was going to summon him back to explain why, despite being closely questioned by the committee about his relationship with Wallis in March, he never mentioned the consultant deal—which he had signed off on. It was Yates who decided not to reopen the police investigation into phone hacking in July 2009 after the Guardian broke the news that Murdoch had paid out over £1 million to settle three lawsuits that could have revealed the “use of criminal methods to get stories.”

For Nation readers hoping to follow the fun, the BBC has prepared some convenient thumbnail profiles of committee members. Labour member Tom Watson, a longtime Murdoch foe (he successfully sued the Sun for libel in 2009, and has long been a lonely voice urging his fellow legislators to attend to the phone-hacking scandal) should be especially worth watching. Paul Farrelly, another Labour member (and former finance editor of the Observer) also ought to be able to cause the Murdochs considerable discomfort.

One more fun fact: Conservative member Louise Mensch, who acquired her evocative (at least for Yiddish-speaking readers) surname by marrying Peter Mensch, manager of the bands Metallica and the Red Hot Chili Peppers, is better known as Louise Bagshawe, best-selling author of such chick-lit classics as Venus Envy, Passion, Desire and Destiny.

So what questions should the committee ask? Guardian reporter Nick Davies, who has been both Woodward and Bernstein in this British Watergate, has written a typically lucid piece pointing out that “the task is not simply to ask questions, but to confront the witnesses with the evidence which is already available.” His resume of suggested lines of inquiry is well worth reading—as are the crowd-sourced questions on the Guardian’s blog.

Americans will of course also want to know whether any of the criminal behavior that seems to have been standard procedure at Murdoch’s British titles made its way across the Atlantic. We might also remind British Parliamentarians that if they wonder what Murdoch’s broadcasting would be like without the fetter of parliamentary supervision—and the competitive standards of the BBC for comparison—they need only look at Fox News. If that’s what you want to encourage in Britain, by all means let the Murdochs off easy.

Otherwise the essential questions are really the same as those posed by Fox News president Roger Ailes’s previous employer, Richard Nixon: What did he know? And when did he know it?

D.D. Guttenplan, who writes from The Nation’s London bureau, is the author of American Radical: The Life and Times of I.F. Stone (Farrar, Straus and Giroux).

This article was originally published on CommonDreams.org, from TheNation.com.