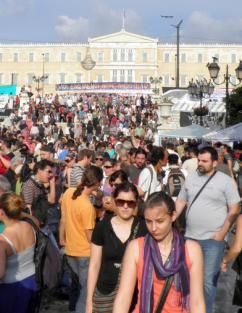 As rocks fly and tear gas wafts through the streets of Athens, Greece’s Prime Minister George Papandreou has warned of a coming crackdown on protesters and striking workers. Meanwhile, a new bailout for the banks is being prepared in the halls of power in Europe.

Papandreou was able to secure breathing room for the Greek government with another round of emergency loans that saved it from the immediate prospect of default–the state failing to pay back some or all of its debts. The condition for the latest “rescue” is another round of austerity measures imposed on workers who have already seen their living standards drastically reduced at the command of the European Union (EU) and International Monetary Fund (IMF).

Yet even at this cost, Greece’s sovereign debt crisis continues to pose a major threat to the world financial system.

The Greek government’s debt to other countries is almost $500 billion–or 1.5 times the annual economic output of the entire country. With the economy mired in a deep recession that has only been made worse by austerity, and with the government unable to cover its basic expenses without assistance, a Greek default now seems almost inevitable.

As the Washington Post reported, “The emergency loans expected to be made available to Greece will pay its bills for perhaps only two more months…It will be back to the brink by the end of summer.”

Banking executives from Europe and the U.S., along with European heads of state and officials from the “troika” of the EU, European Central Bank and IMF, have been holding weeks of intense meetings–chiefly to find a way to save private banks from taking a big hit as a result of this intensifying crisis.

The latest bailout is being disguised as a long-term loan package to “help Greece.” Advocates for the deal insist that with the help of this $160 billion package, the Greek economy will recover, allowing the government to fix the country’s finances and repay its debts.

But the reality is that the proposed new package, accompanied by usurious interest rates and even further austerity measures, will worsen Greece’s economic position and make it even more difficult for the country to pay back its debts–just as Greece’s last austerity package did some 18 months ago.

Put simply, Greece’s state finances are badly broken, and another intervention by the troika will only worsen the overall economy, while temporarily putting off a default.

But admitting as much today would force the European and world banking systems to confront another potentially disastrous international financial crisis even as they continue to deal with fallout from the last one. The negotiations over Greece are therefore aimed at buying time and ensuring that the inevitable financial losses will be shouldered mostly by taxpayers, rather than private banks.

As the Economist has already acknowledged, “[T]he plan seems to do too little to help Greece and too much to help the banks.”

Socialist economist Costas Lapavitsas made a similar point in the Guardian:

What, then, is the point of the fresh bailout ? The answer is rescuing international bondholders and buying time for banks…In 2015, Greece will be bankrupt, but its debt will be held overwhelmingly by public lenders: the EU, ECB and IMF. When default comes, the banks will be out of it, and Europe’s taxpayers will bear the burden.

As Dutch Finance Minister Jan Kees de Jager concisely summarized it, the aim in Greece is about “converting private debt into public debt.”

Behind the convoluted and perplexing details about the financial mess in Greece lies a simple question: Who will suffer most when Greece eventually does default?Much attention has been focused on the agreement reached with French and German banks to voluntarily roll over their current holdings of Greek debt into new, longer-term bonds. This is seen as a crucial first step for Greece to secure a new deal for long-term financing of its national debt.

But the detail that usually goes unmentioned is that the troika offered the banks a much better deal than they would have received in the case of an immediate Greek default. Under the troika’s plan, European taxpayers from economically stronger nations like Germany will be put on the hook for tens of billions of euros. Meanwhile, savage austerity measures will devastate workers and the poor in Greece, and privatization of state-owned companies and facilities will further open the economy to looting by foreign investors.

So is the option of an immediate default really unthinkable, as bankers and financial officials claim? What would happen if Greece defaulted today?

An immediate default undoubtedly would set off a serious crisis. The entire Greek banking system would go bankrupt, both because it has lots of debt of the Greek government on its books, and also because the European Central Bank would likely cut it off from further funding at that point.

With Greek banks insolvent and the government in default, private banks in France and Germany would stand to lose tens of billions of dollars on their investments in Greek debt. This, in turn, could cause some banks to fail–and would likely would trigger a series of payouts to investors who purchased so-called credit default swaps on Greek debt. These swaps are essentially insurance policies held by banks and other investors, which pay off in the event of defaults.

Because credit default swaps are spread throughout the world banking system, their activation would likely cause further bank failures, much like the ones that took place in the fall of 2008 with the financial meltdown that started on Wall Street. Three years later, many major financial institutions still haven’t set aside enough cash to cover such payouts.

Furthermore, a Greek default would almost certainly undermine the financial stability of other highly indebted European governments, such as Portugal, Ireland, Spain and Italy. That’s because if bailouts prove insufficient to prevent a default by Greece, investors will conclude that these other governments won’t be able to meet their own obligations either.

In short, a Greek default would likely trigger a new global financial meltdown. Commentators have begun referring to the scenario as a “second Lehman”–in reference to the collapse of the Lehman Brothers investment bank, the event at the heart of the financial panic of late 2008.

Even countries like the U.S. that don’t have substantial direct exposure to Greek debt would still be caught up in the ensuing financial whirlwind resulting from a default. That’s why Barack Obama has said that a Greek default would be “disastrous.”

It’s even possible that this scenario could play out in the near term. The current proposal for a planned restructuring of Greece’s debt–in which lenders accept delayed repayments or partially forgive debts–could still scuttled. This is because financial ratings agencies like Moody’s have said they would still consider such a restructuring to be a “selective default.” Such a decision would mean calling in the credit default swaps on Greek debt, creating a knock-on effect.

The crisis is already spreading in Europe. Moody’s unexpectedly downgraded Portuguese government debt to junk status, sending new shivers through the continent’s banking system. Major financial institutions have begun radically restricting lending, not just to Greek institutions, but to all eurozone banks. This is a sign that the Greek contagion has already spread.

Moves by stronger banks to cut back their lending to weaker banks is reminiscent of the build-up to the financial crisis in 2008, when the refusal of banks to lend to one another led to a seizing-up of the markets that eventually led to the collapse of several major banks and taxpayer bailouts of many more.

Predictably, the troika has described the harsh austerity measures demanded as a condition for the bailout agreement as the only possible solution to the crisis.

But the truth is that austerity measures are absolutely not the only way to restore that country’s finances–they are simply the best way of making the working class pay. As Mark Weisbrot, co-director of the Center for Economic and Policy Research, pointed out:

It is amazing how they report as though there’s no choice. There is always a choice…They could default now, and they could refuse to accept these conditions. They may be better off for that, especially if the result of what is going to play out is years of recession and high unemployment.

As the fight against austerity grows and matures in Greece, new solutions–democratic and pro-working class ones–are rising up from the streets of Athens and the round-the-clock occupation of Syntagma Square outside the parliament building.

One possibility is this: With an immediate default, the Greek government could dictate how much of its loans it would pay back and when. Doing this would almost certainly mean Greece exiting the European common currency of the euro. But coupled with a nationalization of the banking sector and a major tax increase on the rich and corporations to raise state revenue, it would be a way of addressing the crisis without making workers pay for the losses of the banking sector.

Not surprisingly, this possibility is considered beyond the realm of acceptable discussion in Greek or European politics. For the bankers, bureaucrats and ruling parties of Europe, there’s only one course of action: make the workers pay. Whether the governments are run by conservatives, as in Britain, or by social democrats, as in Greece or Spain, austerity is the common policy.

But despite this consensus of Europe’s rulers, resistance to the cutbacks continues across the continent–from the big public-sector strike in Britain in June, to the plaza occupations in Spain, to the general strikes and mass protests in Greece.

Greek workers are right to resist efforts to make them pay for a crisis caused by bankers, business executives and politicians. Defaulting on debts to capitalists abroad–and confronting Greek capitalists at home–is the best way to defend the interests of the Greek working class.