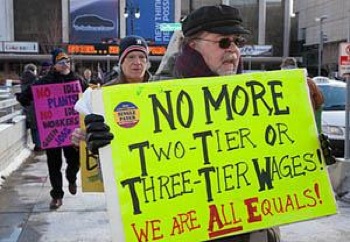 Contract talks between the United Auto Workers and the Detroit Three will soon get under way, on the first post-bankruptcy contract for General Motors and Chrysler. Under terms of the federal bailout of both automakers in 2009, the UAW agreed to abandon striking as a negotiating tactic for 2011.

That leaves only Ford workers with the right to strike—because in fall 2009 they voted down a concessions contract similar to those at GM and Chrysler. It also leaves an uneven terrain for the parties to negotiate. Ford booked a $6.6 billion profit last year; GM $4.7 billion; and Chrysler posted a $116 million profit in the first quarter this year.

UAW negotiators have said they may abandon pattern bargaining this year, cutting different deals for each automaker. In the past they had always hammered out a deal with one manufacturer and used it as a template for the others.

One major concern, however, ties the interests of all auto workers together. The tiered wage structure that was instituted in the 2007 contracts remains. It was a concession that has proved disastrous to new hires and seniority workers alike.

With the looming likelihood that wage tiering will spread and become a permanent fixture within the Three, some auto workers are organizing to call for an end to the tiers, which they say kill solidarity among workers and lead to differential treatment.

In resisting the tiers, they will buck their union leaders. UAW Vice President Joe Ashton has said publicly the union is open to operating more GM plants at the entry-level wage, and President Bob King says tiers can’t be addressed this year because the union, overwhelmed by non-union competitors, is too weak.

Dissidents including a group called Autoworker Caravan are advocating a return to pattern bargaining. Founded in 2008 to pressure Congress during the auto bailout, the group says the union’s first priority should be “Equal Work for Equal Pay”—a reversal of the tiered wage structure.

Leaflets signed by 20 workers from 13 locals, stickers, T-shirts, buttons, a website, Facebook, and YouTube are being used by a distribution network of volunteers. They are encouraging workers to vote no on contracts that don’t end tiers, make temps permanent, reinstate the cost-of-living allowance (COLA), and end plant closings, and instead send negotiators back to the table.

They are demanding that leaders fully disclose all contract terms. No workers should have to suffer concessions that they didn’t know about or even vote for. A speak-out on two tiers will be held in Detroit August 13.

A survey among rank and filers showed their main priorities to be ending tiered wages and regaining COLA. King, on the other hand, has said publicly that he is open to basing wages on “gain sharing” or performance bonuses, rather than the dependable raises and cost-of-living adjustments of the past. To many auto workers this is akin to letting management dream up your pay level from year to year.

Tiered wages were sold to UAW members at local meetings in 2007 by union reps who claimed the concession would be a “temporary cost-cutting measure.” Since then those same reps have been busy negotiating permanent schemes. One way to accomplish this is through “red circling,” whereby one assembly plant at a company is compartmentalized from the rest and top-tier workers are prevented from transferring in.

This means all future employees at that plant will be at the lower tier, no lower-tier workers will have a chance for advancement, and other union plants must compete with the red-circled plant’s lower wage structure. This is whipsawing at its worst, and has been considered at GM plants in Wisconsin, Tennessee, Ohio, and Louisiana.

At GM’s assembly plant in Lake Orion, Michigan, north of Detroit, now building the subcompact Sonic, the union agreed to take the entire plant, eventually, to about $14.60 an hour, down from $28.12. With the signing of the deal, 40 percent of Lake Orion workers were immediately required to either take the pay cut or transfer elsewhere.

UAW International Representative and Pontiac City Council member Lee Jones recently told a group of dislocated Orion workers there have been three suicides as a result of the move. The number of divorces and bankruptcies is not known.

Many lower-tiered workers are unequal in the plants in more ways than pay. The level of union representation at some GM plants varies depending on pay grade. When a call to the steward (“committeeperson”) is put in, stewards often ask whether someone is tier one, tier two, or a temp.

Lower-tier workers can vote on contracts, but some top-tier workers complain that their voting rights should be taken away because they fear the lower tier will vote to take away their top-tier pay and benefits.

Implementation of the tiered wage system has been all over the map, leading to big inequalities not only within plants but between them. When the tiers began in October 2007, it was a crap shoot as to which temps then working were converted to the top-tier wage and benefits, and who got the lower tier. At some plants like GM’s Pontiac Truck, the temps who were working during the contract signing time were hired at the lower tier. At other plants the temps were hired at the top tier.

At still other plants, some temps were allowed to collect top pay for several months, then forced to sign away the top tier because the union claimed it had made a mistake.

The GM and Chrysler 2007 national agreements both specified that “entry-level employees” (tier two) were to work “non-core” jobs, that is, they were not supposed to actually assemble the vehicle. The entry-level workers were supposed to do only jobs like material handling, janitorial, and sequencing parts.

The 2007 Ford national agreement was the only one that allowed for lower-tier workers on the assembly line, and it capped them at 20 percent. Once the 20 percent was reached, individual workers could move into the top-tier ranks on wages (though not on benefits), as new hires took their places. But as of this writing, no lower-tier worker has been elevated to full wage anywhere in the Detroit Three, according to Jones—who says the International nevertheless still views tier two as a stepping stone to tier one. Many work as “temps”—still another tier—for years.

Within months of the signing of the 2007 GM and Chrysler agreements, both companies started adding third shifts to hire the “entry-level employees.” To the surprise of many senior employees, the new hires were added directly to the assembly line. This change was not voted on or authorized by any UAW local at either company. But the result was to open the door for a third-tier worker, one who barely earns above minimum wage, to do the “non-core” work.

At all three of the Detroit auto manufacturers, this third tier works inside the plants but is paid by a “third-party” contractor, doing work like parts sequencing (gathering parts for assembly workers) or sometimes, as at Ford’s Dearborn Truck plant, doing inspection on the assembly line. Some workers at Dearborn Truck have been hired as $10/hour “independent contractors” and thus paid no time-and-a-half even for 66-hour weeks. At Lake Orion, third-tier workers make $10 an hour or less, work for several different companies, and belong to the UAW, which is currently trying to negotiate them a contract.

A hidden concession in all three 2007 national agreements planted the seeds for the spread of the third tier. That hidden concession is the Competitive Operating Agreement, essentially a wish list of concessions, written by management, that they believe would make them more competitive with Toyota and the other foreign companies in the U.S.

The COAs affect work rules, break times, and how many outsourced employees are allowed in each plant. Some even cover outsourcing of skilled trades jobs.

Each plant is rated based on the percentage of compliance with the COA. The companies call this percentage “benchmarks.” The only plant to obtain 100 percent benchmark compliance so far is Lake Orion.

The first UAW local at GM to accept a COA was Lordstown, Ohio, Local 1112, which is now at 80 percent compliance. Lordstown is now competing with Lake Orion to build future versions of the popular Chevy Cruze.

The competition is ugly, both between the plants and between workers in different tiers within each plant, as fear and resentment threaten union pride and solidarity between generations.

As Autoworker Caravan participants said ahead of this year’s bargaining convention, Bob King has done well to pursue “socially conscious” unionism in solidarity with immigrant workers in the U.S. and exploited workers overseas.

But here in the industrial heartland, the leadership is preaching subordination to the corporations.

The union must “mandate that the UAW leadership negotiate an end to the union-busting, two-tier wage structures that have ravaged our plants,” the Caravan said.

Nick Waun transferred from Lake Orion to Lordstown in order not to have his pay cut in half. He is a member of UAW Local 1112.

This article was originally published on labornotes.org.