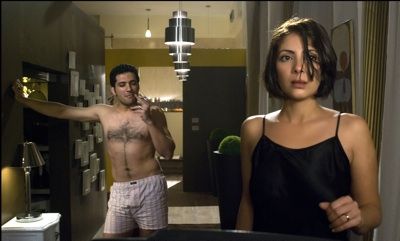 Scheherazade, Tell Me a Story
Directed by Yousry Nasrallah
Distributed by ArtMattan Productions

The title of Scheherazade, Tell Me a Story sets up a bold and fanciful frame of reference by relating its protagonist, Hebba (Mona Zakki), the irreverent host of a popular TV talk show renowned for tackling touchy political subjects, to the fabled storyteller of One Thousand and One Nights.

Scheherezade was wedded to a king who married a new virgin bride each day and had her killed the following dawn in retaliation for his first wife’s infidelity. Scheherezade told the king a new story each night. When dawn came, she left the tale hanging, and the captivated monarch allowed her to live until the next evening when she could relate the ending. This strategy of deferred gratification saved her life and her marriage.

Established screenwriter Wahid Hamed and director Yousry Nasrallah tap into the feminist implications of the legend to indict contemporary Egypt’s institutionalized misogyny, but their film feels and falls so flat it makes one wish they could have taken a few master classes in narrative expression with Scheherazade.

The premise is workable enough, if somewhat overwrought. Seven months into Hebba’s marriage to Karim (Hassan El Raddad), the deputy editor-in-chief of a government-owned newspaper, he is unofficially told that he will be promoted if he can get his wife to soften the socially critical tone of her show.

Reluctantly, Hebba agrees to “stick to things the government can’t be blamed for,” and she invites women to share some of their extraordinary personal experiences in front of the camera. The film is structured around three of these testimonies, which are rendered in straightforward flashbacks. Of course they contain revelations of prejudice, injustice and abuse that spill over in unacceptable political resonance and build up to the point when Hebba’s own cathartic suffering — the scene where Karim beats her bloody is distastefully presented as a rite of passage — makes her part of the sisterhood. Host and guest, she gains access to the nirvana of reality TV; all Scheherazade ended up finding was love.

Notwithstanding their agenda, the filmmakers fail to create any genuine scenes of female bonding, most notably in the second flashback testimony, where they trace three sisters hysterically vying for the affections of a young hunk to its criminal climax over an account of the eldest sister’s fascinating cohabitation with the woman who used to be her guard in prison. The multiplicity of tales fosters superficiality of characterization rather than narrative complexity. The leads muster no credibility as journalists, all men are depicted as boorish and lecherous types instead of people, and the symbolism proves so heavy-handed it occasionally borders on the grotesque. (The opening credit sequence is visualized as a slow-motion Food Network commercial, with extreme close-ups of steely forks poking at moist, verdant produce.) Every now and then hints of melodrama in the style of the early works of Spanish filmmaker Pedro Almodóvar peek through, but those remain far too tentative and clumsy to lift Scheherazade’s patchy exposé anywhere near the discursive level of its illustrious namesake.