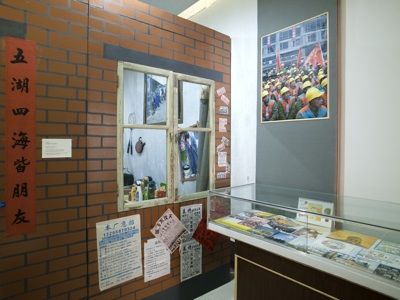 “The Making of the Chinese New Working Class”
Ludlow 38
38 Ludlow St.
Through Sept. 4

Perhaps you’ve heard of this new, post-industrial economy we’re supposedly living in? It’s an appealing concept — a world based on ideas rather than things — but it doesn’t sync up with a rather shocking reality: the global, industrial working class is bigger now than it’s ever been. The exhibit “The Making of the Chinese New Working Class,” currently at Ludlow 38, details the increasing amount of industrial workers in China. For example, one statistic highlighted in the exhibit: By the end of 2008, China was home to over 225 million migrant workers — that’s more than populations of France, Italy and Germany, combined.

The exhibit, which features dry, stat-heavy wall text and big, printed charts, includes many numbers like this — perhaps too many. The show was created by the Culture and Art Museum of Migrant Workers, a worker-founded NGO located in a small village outside Beijing, along with curators-in-residence at MINI/Goethe-Institut in New York. The exhibition also includes public projects (now past) conceived with artist Marty Kirchner and The Public School New York, and a free, multilingual mini-textbook available on ludlow38.org. The exhibit melds social-issue documentary, natural-history-style categorical display and postmodern art ideology — a triad of elements that fit together like old friends, but which can be surprisingly hard to come by. The curators have heroically stuffed a museum lobby’s worth of material into Ludlow 38’s unassuming storefront space (as you look around, see if you can avoid banging into the glass display cases — I couldn’t). There are poignant photographs of families living together in cramped rooms — the flotsam of global pop/consumer culture (is that bed made out of Toy Story toy boxes?) sometimes peeking up amidst the sort of hardscrabble living quarters which, you imagine, laborers have been coming home to for centuries. In those rickety glass cases, you’ll see prosaic artifacts of working life — such as shopworn tools, pamphlets and newspapers. Perhaps most frustrating: a case full of identity documents–passports and paperwork, the yellowing end-products of what seems an endless litany of bureaucratic hassle, all for the odd privilege of being able to work somewhere you’re not from.

The show’s pièce de résistance is a full-scale recreation of a migrant worker’s house. The room is not unpleasant; there’s a little gas stove, a soft bed, a small TV with a DVD player, a dusty computer, squash rackets hanging on the wall, colorful packets of food on the table. But, there’s also yet another reality to be reckoned with, here: this little room, with no running water, is meant as home for around four people. The curators have successfully built a room that’s both somewhere and everywhere: a placid home uprooted into a gallery space, becoming a sort of ground zero — one epicenter among many — in the dizzyingly expansive landscape of global poverty. Perhaps most importantly, you can feel this space in your body. In a world of information, there’s information that can only be experienced in the flesh; you walk away from this show with a felt, bodily knowledge of the lives of those who make our toys and computers, of a reality so tightly connected to — and yet so distant from — daily life in America.

Or is it? Ludlow 38 is located in lower Manhattan, on the edges of Chinatown — a place where it’s not uncommon for Chinese immigrants to live in close quarters while working low-paying jobs, navigating the high Manhattan rents by cramming multiple families into tiny apartments. It seems a bit strange to mount an educational exhibition on the lives of migrant Chinese workers in a place where many migrant Chinese workers live their lives. But, maybe that’s the point —solidarity and communion, the sharing of space and ideas across large distances. Not a lecture and not a lesson, just life.