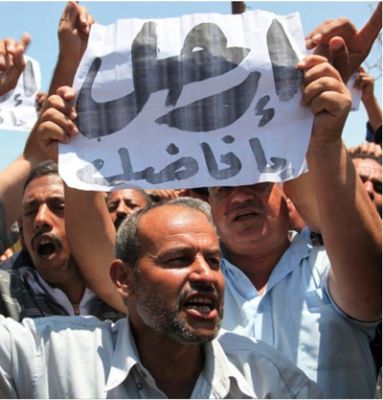 ISMAILIA, EGYPT — For 26 years, Mohammed Gharib Abdullah has been proud to be a mechanic at the Timsah Shipbuilding Company on the Suez Canal, a symbol of Egyptian economic and engineering might. He works in Ismailia, a desert city of 750,000 inhabitants near the midpoint of the 101-mile-long-canal that links the Mediterranean and Gulf of Suez. In early July, however, Abdullah stood outside the gates of his idled factory. He and 8,500 other ship and port infrastructure builders were on strike, claiming that a crony of ousted President Hosni Mubarak reneged on a wage increase they won a few months ago. “Most of the laborers love their work,” he said. “All that we dream of is to live at a basic level of dignity.”

These workers are employed by seven separate subsidiaries of the Suez Canal Authority (SCA), which is headquartered in Ismailia. They receive on average one eighth the wages of the more than 10,000 workers who are directly employed by the authority, which facilitates the passage of nearly 20,000 ships a year, accounting for 8 percent of world shipping traffic. SCA workers and their families also enjoy government-paid private healthcare facilities and heavily subsidized housing, benefits denied to subsidiary employees.

Emboldened by their critical strike during the pro-democracy uprising that ousted President Hosni Mubarak in February, the workers struck again in April demanding parity with SCA workers. Suez Canal Authority chief Ahmed Fadel agreed to a 40 percent increase in wages and a 7 percent bonus, noting that the funds were already in his budget. But on June 1, the agreed date of implementation, Fadel reneged without explanation even though SCA revenues are projected to increase by 11 percent this year to $5 billion. The subsidiary workers walked off the job, while the SCA workers, who are members of the state-controlled Egyptian Trade Union Federation (ETUF), rallied in support of their boss.

The canal workers are not the only ones discovering that despite the strong popular movement that ended three decades of Mubarak’s U.S.-backed rule, the Egyptian revolution is far from finished. Labor organizing is on the upswing in Egypt but workers are divided over political strategy while economic elites have moved swiftly to counter independent worker organizing and the governing military council is cracking down on labor protests. In Abdullah’s opinion, “Nothing changed at all. It’s almost like a counter-revolution.”

STRIKE BREAKERS
The strike in the Suez is one such example. Far from displaying solidarity, Egyptian Trade Union Federation workers were allegedly paid by the authority to attack striking workers, according to the news website Ahram Online. On July 4, 2,000 soldiers clashed with protesters in Ismailia, reportedly injuring dozens of workers. Union organizers say they have been subjected to police interrogation. And in mid-June, soldiers fired their weapons into the air when workers approached the SCA office to voice their grievances. “Why are peaceful protesters being met with live rounds?” asked Mohamed Hamzawy, a mechanic at the Timsah Shipbuilding Company.

Fadel is widely known as one of the many corrupt officials under Mubarak who retains his position of power. But he’s only part of the system that is still in place. For a true economic revolution to take place in Egypt, as Hossam el-Hamalawy, one of the country’s most famous bloggers, has written that these types of “workplace Mubaraks” have to be thrown out by the class they repress.

Egypt’s history of labor unrest goes back to 1170 BC when tomb builders laid down their tools after Pharaoh Ramses III withheld their rations. Fast forward to the 1952 revolution led by Gamal Abdel Nasser and the Free Officers movement. Egypt began to nationalize major industries and the financial sector and establish state-controlled unions while banning all independent worker and political activity. After Nasser’s death in 1970, his successor Anwar Sadat opened the door to foreign capital and cut subsidies such as those for food, which sparked the great bread riots of 1977 that nearly toppled Sadat. In the 1980s, World Bank and IMF-led market liberalization surged under Hosni Mubarak who unleashed security forces against protesters.

Structural adjustment programs enabled capitalists to scoop up 190 public-sector firms by 2002. Labor organizing revived the following decade, and from 1998 to 2008 more than 2,600 unsanctioned job actions took place, including strikes, sit-ins and rallies against low wages, employer abuses and downsizing.

Market liberalization has also changed the Egyptian landscape and society. Qualified Industrial Zones were created a decade ago, which grant generous tax, tariff and profit breaks to owners and allow them sweeping powers over labor. Sadat City, one of 10 such zones, is an industrial hub that sits off the dusty highway connecting Cairo to the Mediterranean city of Alexandria, and is home to textile, glass, chemical and steel production. In late June, a delegation of union officials from the United States met with organizers of new independent unions in Sadat City. While the Americans expressed admiration for the workers to mobilize in the face of repression, the Egyptians expressed fear and despair.

One textile worker, who identified himself only as Mohamed, trembled as he told the Americans, that in post-Mubarak Egypt the labor code remained the same, with “all the rights for the employers and few for the workers.” A female worker at the Turkish-owned Mega-Textile recounted how a manager assaulted a striking comrade in April. Dozens of workers said that while they are eager to form independent unions, the foreign company owners threaten them with termination, demotions and transfers as scare tactics. According to the U.S.-based Solidarity Center, which is part of the AFL-CIO, independent unions are virtually nonexistent in the zones and workers are regularly forced to sign undated resignation letters that are used if they engage in job actions.

A TAXING UNION
In Cairo, independent unions, including 55,000 real estate tax collectors (which in 2009 formed the first independent union outside state control since 1957) and primary and vocational school teachers, have formed a new labor federation to challenge the ETUF. The upstart federation’s political demands are direct: End legal roadblocks to forming new independent unions, raise the minimum wage (it is around $118 a month for public sector workers, although many teachers are denied full-time, permanent employment and do not receive even this paltry salary), and secure collective bargaining rights for these new unions.

Abdel Hafiz Tayel, the co-founder of the teachers’ union, insists on a broad set of labor and education reforms to undo decades of liberalization. This includes ending the use of private schooling, which he argues has led to the education gap between rich and poor in the country, forcing anyone outside the economic elite to low-wage industrial or service jobs. Vocational schools need more investment, he said, in order to train workers for more skilled, and thus higher-paid, work.

But achieving these political goals seems out of reach. With a myriad of radical and left parties competing for power in the fall elections, the needs of labor often go ignored. In general, revolutionary groups currently engaged in dramatic standoffs with the police and military are more focused on a speedier transition to formal democracy and trials for former officials.

Kamal Abbas, the lead coordinator of the once-banned Center for Trade Union and Worker Services, which is helping to form the new independent labor federation, said workers have more pressing issues than electoral politics. Abbas said fighting the ETUF’s monopoly on organizing and forming a strong counterweight to the economic elite were of greater importance. “We don’t say we won’t work with a political party,” he said during in an interview at the center’s office in south Cairo. “We can work with them, but not make them a part of our independent unions.”

That’s all well and good said Joel Beinin, a professor of Middle Eastern history at Stanford University and an expert on Egyptian labor, but there is still a gulf of opinion between the labor movement and people like Ahmed Maher of the April 6 Youth Movement, a leader of the January 25 uprising (named after the date it began) and the continuing unrest.

While on a recent trip to Egypt, Beinin explained that Maher and the April 6 Youth Movement represent an urban, educated middle class who favor a liberal, capitalist system in which they believe they can compete and thrive. What they want is a piece of the global pie that has been kept out of their reach. The New York Times in July, for example, highlighted how young entrepreneurs who stayed in Egypt after the uprising instead of going abroad are receiving start-up funds from the U.S. State Department and Agency for International Development.

In fact, veteran Middle East journalist Thanassis Cambanis has reported that there is already a split inside April 6, with breakaway leader Tarek El-Khourly accusing Maher of courting international investors.

The labor movement, on the other hand, distrusts foreign capital and interests and seeks an economic safety net and workplace protections. Beinin says they want a system that “is going to guarantee social benefits [and] a reasonable livelihood.”

HURDLES AND ROADBLOCKS
New unions have been able to form since Mubarak’s ouster, but the Ministry of Manpower and Migration puts up bureaucratic hurdles. The ETUF also throws up roadblocks by telling employers they shouldn’t recognize new worker groups. Above all, there is nothing new in the labor code that could force bosses to raise wages, implement better safety protocols or concede more benefits. Kamal Abbas said this is part of Mubarak’s legacy: There have been instances where factory strikes have resulted in wage demands being met, but they are few and far between.

Meanwhile, a key problem standing in the way of a new workers movement is internal divisions. Hamzawy, when asked why the canal workers were not considering coordinating a general strike with other manufacturing workers, responded, “Our demands are not the same.”

If one looks only at specific grievances at individual work sites this is true, but the majority of workers face the same retrograde labor code, low wages, lack of advanced vocational schools and an education system that lags behind those in other Middle Eastern countries. Despite the stance of SCA head Fadel and the inequity between the subsidiary workers and other employees, the canal strikers insist that they are proud of the SCA and care about its economic health. They vowed to work overtime to make up for lost work once the strike ends.

This, however, is far different from the attitude one finds in the Qualified Industrial Zones of Sadat City. Workers there spoke about how demoralizing their situations were, especially when their companies’ foreign owners employed supervisors doing the same work as those on the shop floor, but at three times the pay.

There is economic hope for Egypt. On June 25 the interim government rejected $3 billion in IMF loans in the face of strong public opposition. Samer Shehata, an assistant professor of Arab politics at Georgetown University, recently told National Public Radio that the neoliberal policies that accompanied past loans “simultaneously produced high inflation and declining real wages and increasing levels of poverty and income inequality, according to the World Bank and IMF’s own statistics.” This represents a break with Mubarak’s Egypt, but fundamentally restructuring the economy will only happen if the working class has a direct voice in shaping the new government and can build its own power against employers.