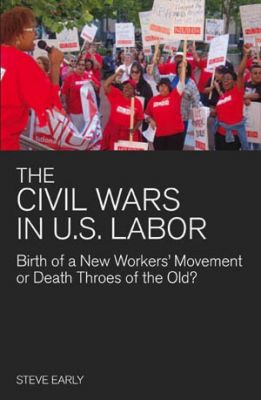 The Civil Wars in U.S. Labor: Birth of a New Workers’ Movement or Death Throes of the Old
By Steve Early
Haymarket Books, 2011

After labor’s public sector defeat in Wisconsin, unionists and their allies licked their wounds and wondered, what next? Tens of thousands of teachers, municipal workers and their allies took dramatic action against the right-wing governor hell-bent on destroying union membership. What separated Wisconsin from typical union protests was that workers operated under the auspices of official unionism but also as independent agents in a social fight that was bigger than collective bargaining — it was a fight between the billionaire’s puppet governor and the people.

In his new book, The Civil Wars in U.S. Labor: Birth of a New Workers’ Movement or Death Throes of the Old, Steve Early, a former labor organizer and attorney discusses the history and future of the Service Employees International Union (SEIU) — and his critique is often searing.

Over the past decade, the SEIU has broken ties with the AFL-CIO and cofounded a rival labor federation, Change to Win, and sought to consolidate its smaller local unions into large multi-state mega-locals to better organize wealthy corporations. Former SEIU president Andrew Stern put these mergers into motion by pressing local leadership into voluntarily joining mega-locals or by placing reticent locals into trusteeships and appointing trusted lieutenants to run them.

Early turns every rock over and often finds mud. In SEIU’s Nevada Local 1107, a common story line in Civil Wars occurs: depending which side you’re on, Stern backed reformers — or usurpers — and fought local leadership to make 1107 a more effective organizing machine — or to strip members of their rights. The Stern-backed organizer, “Hurricane” Jane McAlevey squared off against 1107 president Vicky Hedderman in a tainted election where the Department of Labor found that McAlevey’s slate illegally used union resources to campaign. What followed were decertification elections and lost members to SEIU’s rival California Nurses Association, and the end of McAlevey and Hedderman’s SEIU careers (McAlevey currently writes for The Nation).

Civil Wars also weighs in on the SEIU’s use of a 1-800 hotline to substitute for a work-site based grievance system (shop stewards), as well as the continuing California healthcare civil war with United Healthcare Workers West — the “mother of all trusteeships” as Early termed it.

Early’s Civil Wars pulls back the purple curtain and reveals an autocratic wizard (Stern) pulling the levers and wreaking havoc. It should be said, and Early agrees, that the SEIU is a vital institution that has lifted millions of low-wage largely Black and Latino service workers out of abject poverty through the benefits of union membership, while also advocating for better healthcare practices like patient to staff ratios. The union has a clear plan to organize the unorganized where most other unions are content to coast on a dwindling supply of dues money. The SEIU is also not as monolithic as Early thinks, and as any large organization goes, has factions both left and right. Early advocates for what writer Robert Fitch calls “union democracy”: the conflict between bottom-up member democracy and top-down bureaucracy.

Reading Fitch’s union democracy essays in past issues of New Politics, I was struck by his metaphor that unions are “black boxes whose institutional contents — the relations between members and leaders and its legal infrastructure — can be ignored in explaining their behavior.” Fitch’s union critique burns even deeper than Early’s, and Fitch asks if the reason why Madison-type protests are so rare is less a product of declining union rolls and internal democracy but more a product of unions themselves.

“American unions, going back to the creation of the AFL, have been predominantly local rent-seeking institutions. So the problem of union governance was basically a question of which groups would get to share in the rent. This economic goal dictated a politics of closure rather than a politics of mass mobilization.”

For Early, the SEIU’s mergers squelch a member’s voice, but for Fitch they represent a streamlining of union resources in order to more effectively compete with other unions to procure “rent” and thus conflict or civil war occur. I am with Early in the short-term for next steps: union members need to push leadership or run for union office, but Fitch’s black box will need to be opened for answers to the long-term.