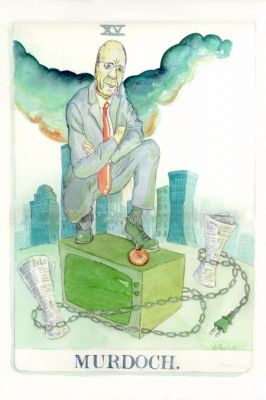 Much ado has been made of Rupert Murdoch’s ethical issues in England, with the conservative billionaire and his son James answering to a British parliamentary panel for News Corporation hacking the phones of child murder and terrorism victims alike. Less mentioned are Murdoch’s stake in U.S. media, accounting for over 75 percent of News Corp.’s revenue.

In New York City, where his U.S. empire is based, Murdoch’s creep into daily life extends even past possible breaches of 9/11 victims’ privacy. In 35 years, the scandal-chasing publisher has gone from a new player in a rough-and-tumble media market to one of its most dominant and aggressive shot callers. Although News Corp. has scuttled its bid for a majority position in British Sky Broadcasting, no similar signs of retreat can be seen in New York City, where Murdoch’s reach extends from television to cable to a wide variety of newspapers and now even public education.

Murdoch’s foray into the Big Apple began with his purchase of the New York Post for $31 million in 1976. Prior to Murdoch, the paper supported traditional liberal causes and featured writers like Pete Hamill and Eleanor Roosevelt. Under Murdoch’s supervision the Post immediately converted into a scandal sheet with a far-right editorial line.

Continuing to add to his newspaper holdings in the United States throughout the late 1970’s and early 1980’s, Murdoch also sought to expand into U.S. television broadcasting. In order to comply with FCC standards for television station ownership, Murdoch became a naturalized U.S. citizen in 1985. The next year he bought six television stations from cash-strapped Metromedia, among them WNEW in New York. The station’s call letters were changed to WNYW (Channel 5 in New York) and it soon became the flagship of Murdoch’s broadcast empire (Murdoch also owns WWOR Channel 9 based just across the river in Secaucus, NJ). His cross-ownership of both a TV station and a daily newspaper in the same city violated FCC anti-trust policy, so in 1988 Murdoch sold the Post, a move Alexander Cockburn compared to “Dracula selling his coffin.”

While Murdoch turned WNYW into the centerpiece of the newly launched Fox Network, the Post’s fortunes plummeted. In 1993, the FCC allowed Murdoch to repurchase the paper, saving it from bankruptcy and returning it to its former sex-and-scandal format.

Seen from a strictly financial angle, Murdoch’s ownership of the Post has been a sizable failure. By 2005, industry analysts put the Post’s annual losses between $15 and $30 million a year. The paper has also been a chronic center of controversy, hawking bigotry and Murdoch’s conservative views. In 2009, for example, after the Obama administration passed the stimulus bill, the Post ran a much-reviled editorial cartoon featuring two officers with a smoking gun, standing over the body of a dead monkey, saying “They’ll have to find someone else to write the next stimulus bill.”

The next year the Post echoed far-right fears about a “mosque” at Ground Zero (in reality a sort of Islamic YMCA). Though this wedge issue lost its value after the midterm election, and was summarily dropped by both the Post and Fox News alike, the Post used the uproar to repeatedly imply that Muslims were creating a 9/11 victory monument.

New York City is the largest, most influential media market in the country. And, Murdoch’s drive to dominate it from top-to-bottom accelerated during the past five years as he sought to establish the kind of
hegemony over political and cultural life here that he achieved in Great Britain.

In 2006, News Corp. also bought two weekly newspaper groups — the TimesLedger and Courier-Life companies — based in Queens and Brooklyn respectively. They were reorganized as the Community Newspaper Group, which now runs seven papers in Brooklyn and seven in Queens. When News Corp. purchased the Bronx Times and Bronx Times Reporter in 2007, its circulation of New York weeklies rose to nearly 300,000.

That same year Murdoch made his boldest move to date, purchasing Dow Jones & Company and its subsdiary the Wall Street Journal.

Murdoch not only changed the Journal’s style, but he also created a Greater New York section as a direct competitor to the New York Times, the publication he loathes and would like to supplant as the agenda-setting “paper of record.” New York City has four of the country’s 15 biggest daily newspapers, two of which are owned and operated by Rupert Murdoch. The Post’s circulation tops 520,000. The Wall Street Journal has the nation’s highest daily circulation, more than 2.1 million.

In 2009 Murdoch once again extended his reach into local media, buying out the Brooklyn Papers, a newspaper group run by the Post’s former Brooklyn Editor Gersh Kuntzman. Kuntzman, who had once decried the influence of “billionaires” in the local news market, was content to rejoin his former employers and increase News Corp.’s weekly circulation in New York to 340,000. Murdoch’s New York City weeklies already show signs of falling in line with the Post’s conservative, scandal-sheet editorial style.

Perhaps even more worrying in the long term for New Yorkers is Murdoch’s increasing reach into their public school systems. The New York State Department of Education has announced that it plans to award a $27 million no-bid contract to Wireless Generation, a News Corp. subsidiary, to gather the academic and personal information of students throughout the state in order to track their academic progress.

Local education activists have gathered hundreds of signatures on petitions urging State Comptroller Thomas DiNapoli to nix the deal which they believe was facilitated by Joel Klein, the former NYC schools chancellor who recently went to work for News Corp. as vice president for educational technologies.

Manny Jalonschi is author of Hustlers and the Idiot Swarm.