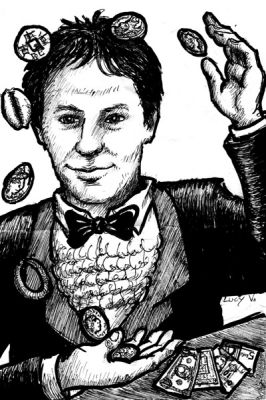 Pundits like to point to an overreliance on debt as a distinguishing feature of our modern age. Right before the crash of 2008, U.S. consumer debt equaled the country’s GDP, repeating the pattern of 1929. In 2010, Americans’ total credit card debt was surpassed for the first time by the debt held in student loans. This year, the total value of those loans will pass $1 trillion.

Anthropologist David Graeber’s Debt: The First 5,000 Years is timely, but it would have been just as prescient during the colonization of the Americas or Ancient Rome. As Graeber masterfully demonstrates, debt has played an integral role in human relationships since time immemorial. Debates over debt forgiveness have defined societies, and the repercussions of those choices are visible today in our language, conventions and laws.

Graeber, a professor at Goldsmiths, University of London, has a reputation as a scholar with great resonance outside the academic realm. As such, Debt is a refreshing, revealing and often witty look at economics that places the “dismal science” firmly back in the context of human history. Graeber sat down with The Indypendent to discuss his new book and shed some light on our troubles with money and the latest global upheavals.

Irina Ivanova: What’s wrong with the traditional economic picture?
David Graeber: We’re all brought up with this story: once upon a time there was barter, and that was inconvenient, so people had to invent coins, and then credit systems — this leads us to Wall Street and complex financial instruments. But this is backwards. Actually, credit systems came first. Coinage was invented thousands of years later. And barter really only occurs when [a society] used to have money and it goes away for some reason — Argentina, Russia, someplace like that.

II: So, though we talk about debt in moral terms, why is there such reluctance to apply this morality to institutions?
DG: History has pivoted back and forth between periods dominated by virtual money — credit — and periods dominated by actual physical money, gold, silver or bronze coins. When money is assumed to be a social relationship or credit arrangement, it’s much harder to treat debt as a sacred principle, because money is a promise, and promises can be renegotiated. During these broad periods of history where most money is paper or promises, or sticks, or clay, there’s always social control to prevent credit crises from getting out of hand.

What we saw in the current credit crisis is partly the effect of this hyper-charged neoliberalism, where people were told, everybody has to think of themselves as a corporation; everything is capital, everything is an investment. In fact, financial corporations got to do things that even other corporations didn’t get to do, like make up money. I strongly suspect that if you look at why people were taking all these crazy mortgage loans they couldn’t possibly repay, on some level the logic was, okay, well if we’re all going to be little corporations, I’ll make up money, too.

II: The media has framed the recent debt crises as unprecedented — but you show that financial crises have existed for as long as we can remember.
DG:  In ancient Mesopotamia, where they first invented interest-bearing loans, they would lead quite regularly — every generation — to extreme crises, where farmers grew increasingly indebted, to protests … Society would start to break down. And the reaction of governments was always debt cancellation.

In periods where gold and silver are the dominant form of money, which tend to be periods of great empires and slavery — they don’t forgive debts. In fact, debts become one of the major ways of turning most people into slaves.

II: You draw a connection between cash and violence.
DG: The first objects of exchange were people. It had been assumed that people were absolutely unequivalent to anything else. If you marry my sister, you owe me a sister at some point, or if they have kids, one goes back to my clan — these sorts of arrangements. But the idea that my sister would be equivalent to 27 gold bars is completely outrageous. You only make that leap when you have systems of slavery, which come from war. A great finding of the book is just how many of our economic, legal and political institutions go back to ancient warfare, and by extension, slavery.

Our law of property goes back to Roman law, and it’s unlike any other legal system in the world, because it assumes property is a relation between you and a thing in which you have total power over that thing. This idea only crops up at exactly the time that Romans conquered the Mediterranean and thousands of slaves came pouring in. And slavery is a relationship of absolute power between two people that, therefore, turns one of those people into a thing. In fact, that’s how slaves are defined — talking things.

That logic still remains within our conception of freedom. Gradually freedom went from being part of a community to the ability to do absolutely anything. So it becomes modeled, because the slave owner can do anything he wants to the slave, and by extension, to the rest of his property.

II: So what would happen if all the world’s gold reserves evaporated?
DG: It would make no difference. The gold that’s underneath the Federal Reserve in New York doesn’t actually do anything. It’s not clear why they call it the federal reserve, because they don’t have to have reserves. They can just make up money. And they do! That’s quantitative easing. The gold is a purely symbolic token at this point.
The forms of capitalist money — the kind that capitalists use with each other — have tended to be government war debt. Cash markets themselves have arisen, more than anything else, as a side effect of military operations. Coins originally were minted to pay soldiers, mercenaries, standing armies. That’s why when large standing armies disappeared in the early to middle ages, so did coins.

II: How do you reconcile the fact we’re an empire whose money is entirely virtual — a situation that never appears in your book?
DG: Yes, there’s a problem, isn’t there?

My own prediction, if history runs true, is those empires are going to break down. Once we go back to an understanding that money is just a social arrangement — it’s just a promise, an IOU — there’s no intrinsic moral difference between that type of promise and any other promise people make. That’s exactly what people who are demonstrating in Greece and Spain are talking about.

We learned in 2008 that debts could be made to vanish if really important people want them to. Once you know that, they can’t play the same games they’ve always been playing. But at the very dawn of this new age of virtual money, the first thing they tried to do is create this giant global bureaucracy — the IMF, the World Bank, and so forth — which were essentially built to protect creditors from ever having to face default from any debtor. There was a huge global movement that completely rejected that logic, and that’s the movement that has now reappeared in Europe.
Meanwhile, Saudi Arabia’s big reaction to the threat of the Arab Spring, other than beefing up security and raising salaries? Debt cancellation. Just like in ancient Mesopotamia.

That intimate relation between empire and financial structures and capitalism is still with us. What will it take to make this imperial structure dissolve? Is it in the nature of capitalism that it can only work in a situation of large empires? Most of the defining features of capitalism strike me as things that won’t last too long in this age of virtual money. The idea of perpetual growth — that’s obviously hitting its ecological limits anyway, but it’s very much tied to an assumption that all money makes money.

Most people for much of world history, if they came to see America today, they would assume that most people here are slaves. Aristotle would not seem to think there was much of a distinction between selling yourself as a slave and renting yourself, and if you look at the history of wage labor it tends to emerge as slave rentals. While we’ve gotten rid of formal slavery, we kept the logic of slavery in our laws and our ideas of freedom. If we get rid of that, institutions like wage labor, which define what we find objectionable in capitalism, won’t really last, and there’s every reason to believe we’ll move on to something else.