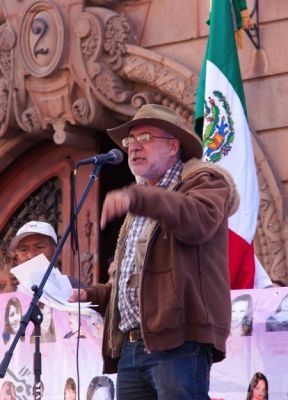 MEXICO — The scale and cost of America’s failed war on drugs is painfully evident to Mexicans as the death toll since December 2006, when President Felipe Calderón sent the army into battle against drug cartels, has topped 46,000. The four main drug cartels have morphed into an ever-shifting array of allied and feuding groups now numbering 12. They have become household names — Los Zetas, La Familia and the Gulf and Sinaloa Cartels — and have extended their reach beyond Mexico’s borders; they are suspected of beheading more than two dozen workers found on a ranch in northern Guatemala in May. The rising violence has created openings in the upper ranks of the cartel, and new leaders spend less on ostentatious lifestyles now and more on buying the complicity of soldiers, politicians and police. State institutions are increasingly corrupt, with perhaps 25 percent of cops on the cartel payrolls, an alarming figure given that Mexico has half a million police, the third highest in the world per capita.

The rot extends to Mexico’s National Migration Institute, the body charged with aiding migrants. It has purged 550 employees, some 15 percent of its workforce, as many were facilitating the “sale” of hundreds of migrants, mainly Central Americans, to drug gangs who in turn sell women into prostitution or ransom them. Families often cough up thousands of dollars for the release of a kidnapped relative. It’s a golden business opportunity, considering the estimated 500,000 people who cross the Guatemala-Mexico border each year. Migration officials have an endless supply of disposable men, women and children who cease to exist once they enter Mexico in clandestine conditions. More than 300 massacre victims have been recovered in ranches close to the U.S.-Mexico border this year.

Mexico is one the most dangerous countries in the world for journalists, with 12 deaths in the past year.

RETREAT INTO SILENCE
Statistics don’t tell the full story, however. The casual brutality and the impunity enjoyed by its perpetrators have diminished trust and provoked an existential crisis. Citizens live in a state of defenselessness as violence now threatens everyone. Mexicans in affected areas retreat into silence just as Chileans did during the Pinochet dictatorship. The media have toned down coverage of drug gangs with some newspapers taking the drastic step of publicly asking cartels to advise them on what they can report, so as to prevent reprisals. Meanwhile, the Mexican army’s involvement in the war has intensified the terror.

“Soldiers kick down doors, arrest anyone they feel like, wearing ski masks and carrying powerful weapons, people don’t know who they are,” said José Hernandez, director of Independent Human Rights Commission in Morelos state. This picturesque state just outside Mexico City was once a sleepy getaway for Mexico’s wealthy. In the past year 335 bodies have been found along its highways and in towns. Not a single arrest has been made.

Everyone has a harrowing story. In April a family from Mexico City made the four-hour drive to Acapulco and went to eat at a restaurant. A bottle of whiskey suddenly appeared at their table. “That señor over there sent it,” said a waiter. A few minutes later the whiskey man demanded to dance with the 15-year-old daughter. The father refused. “Listen carefully,” the stranger said, “this young woman is mine.” The family left, returned to their hotel, packed their bags and headed home. An hour later their car was intercepted and the daughter kidnapped at gunpoint. The young woman has not been heard of since. This was one of 70 testimonies recounted at the Zócalo in downtown Mexico on March 8 during the national march for peace with its unequivocal slogan “Estamos hasta la madre; no más sangre” (“We’ve had it up to here. No more bloodshed”).

DREAMS DEFERRED
There are an estimated 10,000 “disappeared” in Mexico, taken by persons unknown, for reasons unknown, their whereabouts unknown, their relatives and friends living in perpetual anxiety, and the state is incapable of finding any of them.

In Sinaloa state some 700 people have been killed in less than six months, as violence spirals out of control and the police are accused of collaborating with the cartels. The state government’s response is to ban restaurants and bars from playing narcocorridos, popular ballads that extol drug traffickers. I have yet to meet anyone in Mexico who believes, as the official announcement suggested, that this soundtrack to crime “promotes antisocial conduct.” They merely reflect it. In Zapatista villages in the South such ballads can often be heard blasting from homes, the racy lyrics and exaggerated exploits regarded as harmless fun.

In May the governor of Sinaloa once more declared war, this time on Ralph Lauren Polo shirts, the drug traffickers’ uniform of choice. The governor said he was “enormously worried” at how disaffected youth were seduced by the glamour of expensive brands, adding that he wished they would wear clothes with images of national heroes like Emiliano Zapata.

The irony of this was not lost on the Zapatista movement that sparked a renaissance of Zapata’s ideals in 1994, demanding peace, justice and democracy. The government responded with tanks, warplanes and bullets. It was fine to wear a t-shirt of Zapata but the prospect of indigenous rebels implementing the dream of land and freedom was met with army and paramilitary violence. The Zapatistas challenged Mexicans to rethink society, mobilizing millions and forcing the ruling party (in power for 70 years) to open up the electoral system. However, Mexico’s civil society failed to rise to the challenge of cleaning out public life and the result has been a steady moral disintegration that has shattered faith in the country’s political parties, including the center-left Party of the Democratic Revolution (PRD).

Confidence in the country’s authorities is so low and fear of reprisal so great, most families don’t bother registering lost relatives as missing. This became apparent when Javier Sicilia, a poet whose son was murdered by suspected drug traffickers in March, sat down outside the offices of the state government in Cuernavaca, Morelos, for a week. An avalanche of people came forward, registering 1,200 disappeared and 3,500 deaths. Out of this sit-in came the national citizen movement for peace and for the rebuilding of the nation. Sicilia has become the spokesperson for indignant Mexico, his citizen movement for peace gathering steam and fresh ideas as it spreads around the country. Sicilia has grabbed the baton left behind by the Zapatista’s otra campana, its effort in 2006 to unite Mexico from below, which met with little success.

‘MANAGERS OF MISFORTUNE’
Sicilia has urged the government to acknowledge that the country has been devastated by a “badly planned and poorly executed” war. He has lamented the government’s perverse attempt to criminalize victims of violence by insinuating they were not innocents. A similar logic allowed Argentinians to look the other way when thousands of young people were kidnapped, tortured and murdered by security forces in the 1970s. The government has become, says Sicilia, “managers of misfortune,” lacking initiative and imagination.

In his landmark open letter to politicians and criminals, Sicilia linked the rise in drug trafficking to the ideology of self-interest, competition and “limitless consumerism.” He has called on the political class to set aside petty differences and the pursuit of power to forge an alliance around a coherent plan of action. With elections looming next year, Sicilia urged parties to agree on a candidate of unity committed to a constitutional conference that would redraw the boundaries of political life, incorporating the recall referendum and other mechanisms of citizen power.

President Calderón is taking the opposite tack as he enters the twilight of his six-year term. He is rebranding the drug war as a patriotic crusade, deliriously likening himself to Winston Churchill leading the fight against the Nazis. There is no comparison. Calderón declared war on an invisible enemy without calculating the consequences or determining what victory might look like. Nor did he make an adequate survey of the battlefield or measure the moral and military capacity of his troops. Calderón is fully committed to a war in which the rising body count is taken as evidence of success in a macabre dance of death.

The key problem, as Sicilia noted, is that the enemy “is inside as well as outside.” One of the main obstacles to securing the peace is Calderón’s righthand man, Genaro García Luna, the country’s supercop who runs the Ministry of Public Security. During the previous administration of Vicente Fox, García Luna created and ran the Federal Investigative Agency, which was disbanded in 2006 after being thoroughly infiltrated by the drug cartels. García Luna took up his current post in 2006 and has remained in charge despite repeated allegations of links to the Sinaloa drug cartel based on recorded telephone conversations and emails. Discontent has grown within the ranks and security officials have accused García Luna of naming corrupt police to top positions; a journalist investigating his sudden acquisition of wealth received death threats.

In June, Javier Sicilia, the moral conscience of a weary nation, led a national mobilization through 12 states. The objective was to launch a six-point Agreement for “Peace and the Reconstruction of the Country,” beginning in Ciudad Juarez, Mexico’s drug violence capital. The pact calls for demilitarizing the conflict, rooting out corruption, emphasizing education and participatory democracy, attacking poverty and the lack of jobs and defending human rights. In addition, the document demands official recognition for the victims of violence, promoting “active memory” through public testimony and tributes in public spaces.

Sicilia met government officials in late July to begin dialogue on the peace movement’s agenda before submitting practical ideas and legislative proposals to congress in September.

The first issue under debate was the call for a truth commission on behalf of victims of violence, a proposal quickly dismissed by officials; “what is needed is a revision of the investigating procedures and accountability mechanisms which are already in place” countered Rubén Fernández, deputy minister for parliamentary affairs at the Interior Ministry. This negative response to one of the least radical measures sought by Sicilia’s movement is an indication that the government has little appetite for meaningful reform. As presidential elections loom in 2012, the outgoing administration appears determined to stick with the only policy it knows — bloodshed.

Michael McCaughan is a writer and researcher based in the Burren, Ireland. He is working on a biography of Mumia Abu-Jamal.