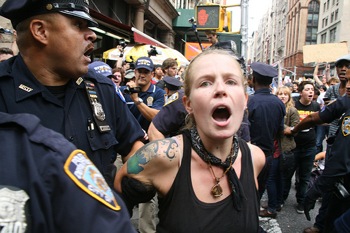 The live-in protesters at Zuccotti Plaza on the corner of Broadway and Liberty Street, which they’ve renamed Liberty Plaza, marked a week of occupation this past weekend. Early Monday morning they found their numbers increased while the spotlight of the corporate media began to slowly turn towards the Wall St. occupation.

The increase in numbers comes after a weekend that was marred by aggressive police use of orange plastic netting to corral and subdue protesters. Organizers claimed repeated use of excessive force by the NYPD to break up their marches, reporting 96 arrests on Saturday and numerous injuries. A self-shot video of two young women being corralled by NYPD officers using orange netting, and then pepper-spraying them in the face, went viral and gained over 56,000 views in less than 48 hours. In total, over 3,000 protesters and supporters of the Wall St. occupation showed up for a series of rallies and marches on Sunday, after the dramatic tension on Saturday.

The arrest of 96 of their fellow protesters, bringing the total number of arrests to over 120 in one week, did nothing to dampen the spirits of the 400-plus occupiers who were there on Monday afternoon, a dramatic increase from the approximately 200 campers reported by sources on the rainy start of Friday morning.

While mainstream media outlets have started running coverage of the protest — with leading liberal journalists like Keith Olbermann and Chris Hayes spearheading the effort — much of the corporate media reporting has been over-focused, in the eyes of the occupiers, on arrests and the occasional violent clashes between police officers and activists. Generally unmentioned are the background, demands, goals and process of the occupation.

Protesters at Liberty Plaza speaking to The Indypendent this afternoon noted a substantial increase in attendance at their general assembly meetings, a direct democratic process that has become central to the protest community’s evolution and self-government. Their one demand has become an evolving series of inter-connected resolutions that they are still refining but generally focus on freeing the American political system from the corrupting grip of Big Finance.

By portraying the movement in detached reports with marketable and convenient images of over-hyped imagined chaos, the corporate media has missed the heart of the story — a democratic assertion of a guaranteed right to assemble and petition the government for a change in course.

While photos of angry, disaffected youth may be easy for the corporate media to produce and disseminate, less easy to ignore is the economic plight of America’s youngest workers, many of whom make up the growing encampment at Liberty Plaza. New census data released last week showed that only 55 percent of 16 to 29-year-olds are currently employed, the lowest employment numbers for this age group since World War II, with nearly one in five living in poverty. It’s little wonder that activists on Monday afternoon spoke about organizing spontaneous protests later this evening against venues that are participating in “Luxury Night Out,” a night when the highest of high-end Financial District shops try to woo the biggest spenders to purchase luxury wares.