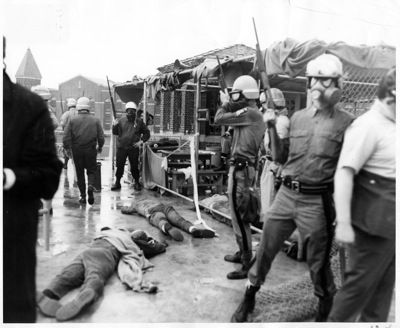 While the upcoming tenth anniversary of the September 11 tragedy is bound to generate a massive public display of remembrance, the same attention will not befall this country’s bloodiest suppression of a prison inmate uprising, forty years ago on Sept. 13. The aftermath of the Attica rebellion marked one of the grossest wide-scale abuses of power in New York history, for which victims are unlikely to ever be adequately compensated. The timely re-release of Ghosts of Attica chronicles their struggle over the years and details how the events they lived through were systematically misrepresented by the authorities and the media.

This documentary stresses the volatile social climate that framed the rebellion and the high political stakes riding on its outcome. Attica became a symbol of the spirit of the times because inmates framed their revolt as a fight against society’s ills. Their demands for the right to decent food, medical attention, religious freedom, legal representation and political expression would be constructed as divisive on racial grounds, since most of the incarcerated were of color and all of the guards were white. Yet the indiscriminate violence inflicted on both groups when state troopers reclaimed the prison in a ferocious nine-minute assault — killing 29 inmates and 10 guards — showed otherwise, as have survivors’ ongoing bids for acknowledgment of the subsequent cover-up, geared to blame all deaths on the inmates. In its analysis, Ghosts of Attica demonstrates Angela Davis’ argument (in Are Prisons Obsolete?) that the prison system is an unnecessary evil, yet a highly profitable one for the powers that be.

In 1971 the latter resided with Governor Nelson Rockefeller, who proved too steeped in his elective ambitions to negotiate with the inmates and risk appearing soft on crime. “No other employer except the government,” testifies former guard Michael Smith, “could shoot and kill his employees and not be held accountable.” Unbeknownst to Smith, who was “mistaken” for an inmate and almost shot as a result, a story was fabricated that he had been castrated and his life threatened by Frank “Big Black” Smith, the inmates’ security chief and one of the leading voices in Ghosts of Attica. After the troopers took over the prison, Smith was more brutally beaten, humiliated and tortured than any of the other inmates, an experience it took him years to be able to talk about.

In retrospect, Smith considers Attica the best, most formative experience of his life, not in the least because it brought him together with defense counsel Liz Fink, the inspirational lawyer who has dedicated her career to vindicating the inmates, attesting that “taking no political stand is being part of the problem.”

After several victorious court appeals and subsequent repeals, the surviving rebels of Attica ended up accepting a meager $12 million settlement, but for most of them the fight continues. Ghosts of Attica does not need the dramatizing techniques — flashy light effects and frantic camera movements — it sporadically indulges in. Given the filmmaker’s expressive use of abundant, well-edited footage and rich layering of perspectives through interviews with individuals who deserve our respect and attention, the truth is already compelling enough.