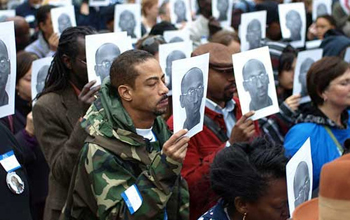 The state of Georgia ignored a mountain of evidence and killed Troy Davis on Wednesday night. But the movement that grew out of the effort to save his life has cast irreparable doubt on the country’s death penalty system. That a man whose innocence seemed so clear to many—or, at the very least, worth of a second look—can be so hastily killed casts doubt over nearly every stage of his prosecution. And that fact has become a rallying cry for people around the world.

Davis’s case is sadly typical. The Chicago-based Innocence Project, a group that has successfully fought for the exonerations of dozens of people from Illinois’ now-defunct death row, lists eyewitness misidentification and government misconduct as two of the leading causes of wrongful convictions. And even then, questions of guilt or innocence seem almost beside the point when you consider the fact that people of color often receive more harsh sentences for the same crimes as whites, especially when the victim is white. As historian and author William Jelani Cobb told our own Akiba Solomon this week, “The implication is that a white life is worth more.”

Anti-death penalty groups like Amnesty International and the NAACP are working hard to use the momentum surrounding Davis’s case to ask more probing questions about how to fix America’s broken punishment system. Here’s a closer look at who ends up paying the most for which crimes.

This article was originally published by Colorlines.com