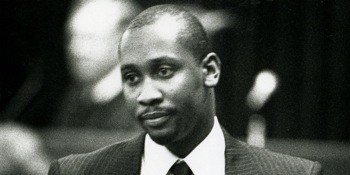 At 10:53 p.m. local time, in a Jackson prison, the state of Georgia began the lethal injection execution of Troy Anthony Davis, a man convicted of murder based on the eyewitness testimony of nine people — seven of whom later recanted. Fifteen minutes later, at 11:08 p.m., Davis was declared dead.

The execution was originally scheduled for 7 p.m., but the Supreme Court intervened at the last moment, granting a temporary delay. There was a momentary sense of relief for many of Davis’ supporters who had gathered to protest around the prison in Jackson. The scant evidence and recanted testimonies used to convict Davis of the 1989 murder of off-duty police officer Mark MacPhail led to a nationwide protest, with international protesters also holding demonstrations in London and Paris. Led by Amnesty International, nearly one million signatures were delivered to Georgia authorities on Davis‘ behalf.

Despite being blocked from trending by Twitter, the #TroyDavis hash tag, and then the “who is Troy Davis?” phrase dominated news on social networking sites. Davis’ supporters hoped the groundswell would be enough to grant him a new trial.

When the Supreme Court decided to consider granting Troy Davis a new case, it was the first time in 50 years that the court considered granting a new case to a death row inmate. The temporary delay only lasted about four hours. At approximately 10 p.m. the news came that the Supreme Court would not block Davis’ execution. A few minutes past 10:30 p.m. a prison guard informed the five media witnesses for the execution that the process was about to begin.

Davis maintained his innocence into the final seconds of his life, using his opportunity for “last words” to address the family of officer Mark MacPhail. “I did not personally kill your son, father and brother,” he told them, according to Rhonda Cook of the Atlanta Journal-Constitution, who witnessed the execution, “I am innocent.“