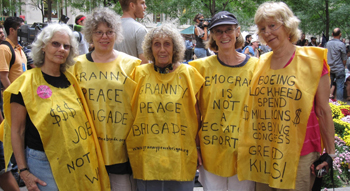 While they were still in their twenties they protested the Vietnam War and fought for civil rights in the South. That was before they became grandmothers and formed the Granny Peace Brigade, challenging a new era of greed and war.

“During the Vietnam War, I had little kids and was working, but I marched.” Eva-Lee Baird remembers her first march. “We chanted ‘Hey Hey LBJ, how any kids did we kill today?” In the 1960s and 1970s she participated in the anti-war movement, but she did not participate as an organizer.

“The second time I marched was when Bush stole the election.” Baird explained she was going through a phase change in her personal and work life. She grew increasingly concerned with what was going on in the United States. As she found herself with more time on her hands, she decided to take her activism to the next level and started organizing, becoming involved with the feminist anti-war group Code Pink and the Granny Peace Brigade, for whom she takes pictures and blogs about their activities.

In 2005 members of the Granny Peace Brigade tried to enlist, claiming that they should be recruited instead of their grandchildren. The Granny Peace Brigade website writes, “We asked to enlist in place of grandchildren who had been deployed in Iraq unnecessarily. We were arrested and charged with disorderly conduct. After the arrest, we could have just accepted an Adjournment in Contemplation of Dismissal (an ACD), but decided, with our lawyer’s help, to go to court to defend our civil right to speak out.”

On Saturday, September 24th, two members of the Granny Peace Brigade were arrested again during the march to Union Square. As Bev Rice, 74, and Joan Pleune, 70, were caught in the police’s nets and cuffed, Baird made sure to bear witness and capture it on camera. This is not the first time Pleune and Rice were arrested for standing up for social justice and civil rights, nor will their encounters with the police stop them from vocalizing and mobilizing. The Granny Peace Brigade continues to spend a few hours each day marching with #occupywallstreet, which often links up with other causes, such as support for Troy Davis rally and the United Postal Service Workers rally.

Baird expresses how valuable teamwork comes into play and that each individual uses her strong suit to help carry the movement. When Pleune and Rice were arrested, for example, Baird helped by being witness to the situation—taking pictures of it and recording the names of the police involved. They started a 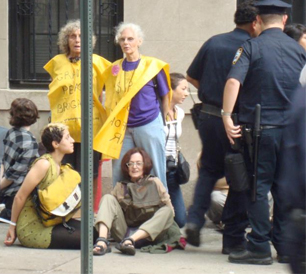 Granny Peace Brigade Facebook page specifically to chronicle their participation in the #occupywallstreet movement, where they post photos of their marches and keep in touch with other protesters they meet.

Rice, a retired nurse, was born in Manhattan and was brought up in foster homes and group homes in Westchester and New York City. She has six children, whom she raised in Queens, and 16 grandchildren.

“I want desperately to do everything I can to support this growth,” Rice said when asked why she’s spends a few hours each day since September 17 at #occupywallstreet. “I am delightedly participating in Occupy Wall Street because I share the group’s demands and goals.” Rice is critical of the current economic structure that “has caused the personal welfare and lifestyle of our middle and working class people to be seriously reduced.”

“I’m delighted that the young people are getting involved bringing their new skills, fresh outlook and creativity into the public eye,” Rice said.

“I think this is a new technique, a reflection of the Mid East Spring. In order to continue they need to attract new people who become really involved in the process. They need to increase and involve the numbers required to “grow” this group.”

When asked about what she thinks of how the occupiers are collecting and organizing themselves, if she might see it as disorganized, Rice explains, “There has to be a history of how you worked.” Although many different people, representing many different things are coming together in Liberty Plaza and together are trying to set goals seems cumbersome, Rice says that at least they are there and are going through the motions of creating something new.

“They hopefully will spread efforts out to many more cities. They need to prevent burnout, a serious problem to developing a ongoing effort. This is a beginning, and hopefully will continue in forms we aren’t accustomed or haven’t been designed yet!”