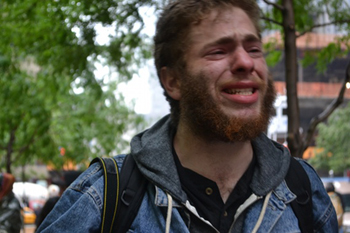 The sun rose this morning—behind clouds—on a tent city in occupied Liberty Plaza/Zuccotti Park in New York’s Financial District, where protesters entered their fourth day of encampment. A farmer’s market was setting up alongside the usual food trucks. Although police had already intervened in taking down a tent on the occupation’s first night, the prospect of early morning rain today made many decide around midnight to set up tarps over media and food supplies, as well as to erect several of the tents that had been donated by the rapper Lupe Fiasco to sleep in themselves. This made for some of the protesters’ most trying confrontations yet with those sworn to serve and protect them.While few were yet awake, a motorcycle police officer could be heard saying on his cell phone, “That’s my plan. To have them down as soon as possible.” On the north side of the plaza, where the morning before there had been three TV news trucks, there was now an NYPD Communications Division Command Post truck. In it was at least one officer with “COUNTERTERRORISM” on the back of his uniform.

At 6:58, an officer wearing a suit and tie began walking through the plaza, peering through the mesh into tents where protesters were sleeping, demanding that “tents have to come down.” This caused a stir among the hundred or so who had spent the night. They woke up and sprung into various sorts of action. Some immediately began complying by pulling out tent poles—“for the good of the movement”—while others insisted that they should stop. Still more volunteered to hold up the tents and tarps by hand, rather than with poles. An ad hoc meeting started in the center of the plaza to discuss the matter, but in the course of it nearly all the tents and tarps were taken down.

Soon, the discussion had moved to the plaza’s northern wall, where General Assembly meetings take place. At around 7:20, 24-year-old Justin Wedes, a teacher and activist who lives in Brooklyn, came to the megaphone to speak. Like several others, he’d nearly lost his voice from all the chanting. He made a plea that the others not be afraid and not to give in too easily to the demands of the police. While speaking, from his left, came a group of police officers. Wedes was spoken to by one of them, and when he continued his address, he was thrown to the ground, without resisting or saying anything more, then handcuffed and taken away. “The Whole World Is Watching!” chanted the protesters, as they got out their cameras and phones to record it. A video was on YouTube within hours.

The rest of the police quickly cleared the scene as Wedes was removed. When they were gone, someone else stepped forward to volunteer to hold up the tarp over the media equipment.

Only ten minutes later, the police were back. A group of them approached another protester behind the meeting. As he was cuffed, officers shoved other protesters aside, who were chanting the NYPD’s motto, “Courtesy, Professionalism, Respect!” In the scuffle, a protester who had been making peace signs high above his head with both hands was grabbed by an officer, pushed to the ground, and arrested as well. The chant changed: “The Whole World Is Watching!”

The incursions seemed timed to prevent a repeat of the large, two-hour march and picket at the Stock Exchange that had started that hour the day before. But if that’s the case, the police needn’t have bothered; the planned morning march, though smaller and shorter than before, set off (remarkably) on time at 9 o’clock.

As if in response, the police were back on the plaza again an hour later. This time the occasion was the tarps which were laid—not hung—over sensitive media equipment. By this point it was raining, and nearly all the occupiers’ possessions were covered under tarps, plastic bags, and unassembled tents. A group of officers approach the tarp and the one in charge gave orders through a bullhorn that it should be removed. But one of the protesters was by then sitting on top of it and banging a drumstick against a pot-cover. He was grabbed, and slipped away, and began drumming again. Then, several officers took him to the ground. Later, while he was being cuffed, he cried out, “I can’t breathe!” and called for his inhaler.

Meanwhile, another protester, Jason Ahmadi, was pulled from the tarp as well. (He was also arrested yesterday for trying to write “Love” on the sidewalk immediately after someone else had been arrested for sidewalk chalking.) Going limp, he was pulled by police officers off of the tarp, dragged, cuffed, and then dragged more across the plaza and the sidewalk on his back, with his hands trapped in plastic cuffs between the sidewalk and his back. By the end of it, they were discolored and bloody.

One other man close to me was apprehended, his face pushed into a flower bed while he was cuffed. As a woman was taken away in handcuffs as well, her partner shouted that he loved her. Officers removed the tarp from the equipment, and then left the plaza with other tarps, tents, and trash bags still in place. There was a standoff on the edge of the sidewalk as protesters chanted, shouted, and held up peace signs to the police, who finally got the order to withdraw. 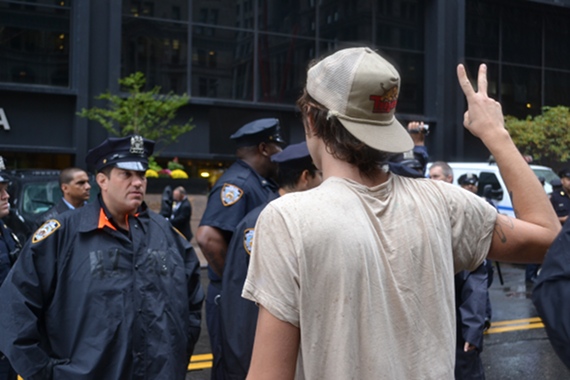 That’s all seven of them. Each of these encounters, for the occupiers, was a moment of both trouble and strength. They warned each other of a police incursion with steady tom-tom beats and other loud noises. Some offered acts of passive resistance, while others shouted angrily, or chanted “Shame!”, or held their fingers in peace signs, or simply sat down. At the end of that last incident, a group of them convened to discuss deescalation techniques.

Late morning in Liberty Plaza, under a light drizzle, had a feeling of drifting, of lost cohesion. Small groups and individuals tried to find things to do, like hold signs, or play music in their underwear for the police (who are often quite personable with the protesters), or defiantly recline on tarps, or look for the tooth apparently broken off from one of those arrested, or arrange for the next meal. 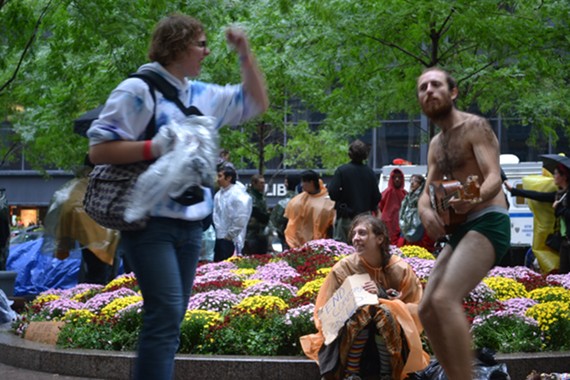 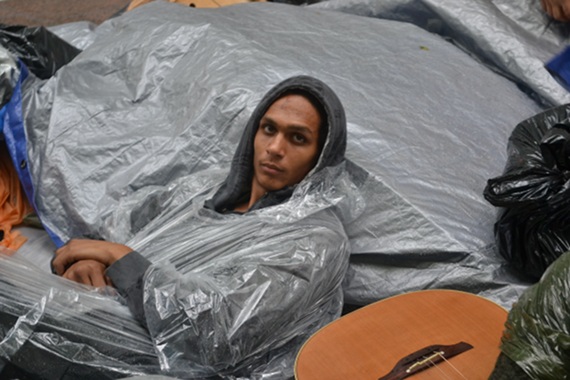 The Command Post truck pulled away at 11:42 and was replaced by vans full of officers on each of the four sides of the plaza. People whispered about whether an outright dispersal was imminent, but then changed the subject and carried on with their business.

When a group of Danish students stopped to watch the underwear musicians, the bearded, Massachusetts-based activist Ari Cowan took the opportunity to tell them about what was happening in the plaza. He did so by using the “people’s telephone”—one phrase at a time, repeated by those around him so all can hear, in rhythmic call-and-response. “We are out here.” (Repeat.) “Because we’ve had enough.” (Repeat.) And so on. He later told me that, after the morning they’d had, it was good to remind himself of why his friends had been hurt and arrested, and why he was still there.

Hope, too, could be found in the appearance of a lawyer—Sam Cohen of the Wylie firm, who declared his willingness to represent the occupiers as a whole if, by consensus, they agreed to it. (In the afternoon General Assembly, they did.) What the protesters are doing, he believes, “represents the core of freedom of expressive associations guaranteed by the First Amendment of the U.S. Constitution.”

The four surrounding police vans drove away at 12:03, leaving the more usual handful of officers and cars and the mobile observation tower. An hour later, in time for the planned General Assembly, the whole place felt different. The rain had stopped, and there were perhaps three times as many people, with new faces as well as familiar ones who had just arrived for the day. The sidewalk of Broadway was full of people holding signs again, and the General Assembly was gearing up. I talked with a man from Washington Heights—on the opposite end of Manhattan—who was coming for the first time after learning about this on the internet. People seemed happy, and eager, and curious.

Not many of them had been around to hear the words of Jason Ahmadi in a speech soon before his arrest, or to see their meaning in his actions and those of others. “The power of nonviolence,” he said through the people’s microphone, “rests in one thing: courage, courage, courage.” 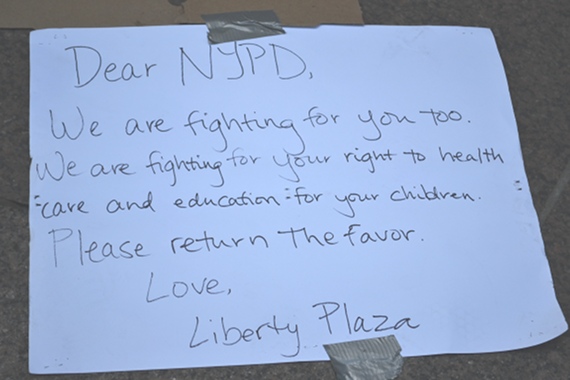 This article was originally published by WagingNonViolence.Org