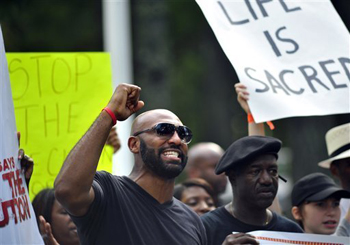 The execution last week of Troy Davis by the State of Georgia on the International Day of Peace was a painful blow to all sensitive people—really to all humanity, not to mention our prestige as a nation. Whatever may have been the “correctness” of the legal procedures leading up to it, it must seem to many no better than a legalized lynching.

Scholar René Girard, with his keen insights into the all-too-prevalent dynamic of scapegoating, ancient and modern (the latter more disguised but no less deadly), often cited lynching as a thinly disguised institutional form of that deadly reflex held over from (even) more barbaric times. By the sheer irrationality of its logic, the death penalty in the United States (and wherever else it is held over) must qualify as ritual. Homicides slightly increase in states where the penalty is reintroduced, and killing in order to show that killing is wrong does not deserve the name of logic.

A California prisoner not long ago who had gotten on in years waiting his turn on death row and had a heart condition by the time it came, told a guard on his way to his execution not to bother reviving him if he had an attack. “Of course we’ll revive you,” the official quickly rejoined, “we absolutely believe in the sanctity of life.”

In fact, we would maintain, all violence is irrational, which is why it is always counterproductive in the long run—and why it can be overcome despite its apparent ubiquity. Truth and nonviolence will overcome unreason and violence if we understand properly how to engage its power.

Just before he went to his death, Davis said to Edward Dubose, president of the Georgia chapter of the NAACP, that this fight is bigger than one person, “whether they execute him or whether he is freed, the fight must go on. Let this case be a crossroad.” If we can make it such, it will be a far better tribute than naming September 22nd after Troy Davis or any of the symbolic observances that have been suggested, however fitting and however much emotional satisfaction they would temporarily offer. Let us think how this could be such a crossroad.

A few weeks ago the death of a three-year-old child in Oakland CA galvanized an entire neighborhood. Everyone pulled together and succeeded in stopping all violent crime for the time being, which in that neighborhood is an impressive achievement. Every now and then some tragedy, it is hard to predict when or how, wakes people up.

What if these healthy reactions were cumulative? What if, every time there was a salutary shock and a new set of people came to life they would not go back to complacency after the shock wore off but would add their creative energy to a growing movement? It’s not impossible. Gandhi actually felt it was a “law,” one of two that he discovered in his eight-year Satyagraha campaign to raise the dignity of the Indian communities of what is now South Africa—and by extension, he was well aware, their oppressors and eventually all of us. There is no limit to how small movements can start if they stay true to their cause, if it is just; and to their vision, if it is sufficiently inspiring, for if those conditions were met they would inevitably grow. He called it the “law of progression.”

The other was the “law of suffering,” that states that, as he put it, “things of fundamental importance to the people are not secured by reason alone but have to be purchased with their suffering… If you want something really important to be done you must not merely satisfy the reason, you must move the heart also.” We will get back to that law in a moment.

The secret of continuity, Gandhi discovered, is “Constructive Programme,” whereby people create parallel institutions if necessary and go on to create the world they want rather than, or alongside protesting the injustices they don’t want and expecting others, especially governments, to do it for them. Constructive programs not only build continuity but put a movement in a stronger position when the time does come for outright resistance.The spontaneous uprising of that Oakland neighborhood was a good, if only beginning example. If those of us who are grieving the death of Troy Davis and are no longer willing to put up with our constant failures to stop such atrocities would commit ourselves to staying together to learn all we can about nonviolent techniques, including the deeper philosophical meaning of nonviolence itself—how it implies a much higher image of the human being than our mass media culture allows—and settle down to a strategic vision for a long term solution, that would be a much bigger example.

I mentioned the “law of suffering.” The forces, mental and other, that cause people to cling to an outlandish, counterproductive form like the death penalty are very strong. At some point when our constructive program has matured—when, for example, we have built up model cases of restorative (rehabilitative) justice here and there and explained their logic to educators, the media, policy makers, and anyone listening—we will nonetheless have to put up a good nonviolent fight against the entrenched superstition around us. At that time we will have to do more than carry a sign and go home, more even than put up with police brutality as others of us are doing right now on Wall Street. We will have to be ready for serious risk in some well-chosen, strategic form.

With solid training and a robust constructive program behind us, with strategy and courage, one can hope that this “redemptive suffering,” as King put it, will be brief and effective. I may be overly ambitious, but I do not believe I am naïve in envisioning that such a movement could go from the barbaric death penalty to our bloated retributive justice system to war itself, carrying out what Troy Davis bequeathed to us in his last letter:

“So thank you and remember I am in a place where execution can only destroy your physical form but because of my faith in God, my family and all of you I have been spiritually free for some time and no matter what happens in the days, weeks to come, this Movement to end the death penalty, to seek true justice, to expose a system that fails to protect the innocent must be accelerated… This fight to end the death penalty is not won or lost through me but through our strength to move forward and save every innocent person in captivity around the globe… Never Stop Fighting for Justice and We Will Win!”

This article was originally published by WagingNonViolence.Org