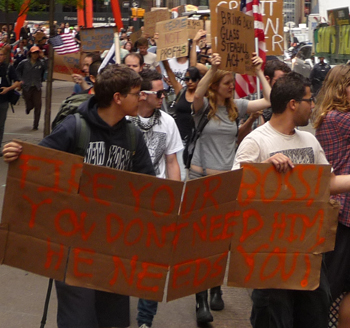 The manifesto of  “the 99%” is duct-taped to the low wall bordering a park three blocks from the New York Stock Exchange. Its printed preamble includes the bullet points “honest, good manners, nonviolence”; beneath this in pen the demands to end corporate personhood and lobbying. Only one page long, the “Principles of Solidarity” is a document in flux, a message-board for this open source revolution. Next to the first copy is another, and another, 10 or so copies in all; a long line of identical manifestos, each the same printed document, with suggestions scrawled in pen.

This is how the ad hoc revolution happens. This is “radical democracy” in practice.

Open-sourced and open-ended might be just the way describe the protest that is unfolding here at Zuccotti Park near Wall Street. Sometime this summer a call was put out to stage a protest on Wall Street along the lines of those that have taken place in Europe and the Arab World. Who exactly originated the idea and when is disputed. The alternative magazine “Adbusters” issued a call to action on July 13, though the internet activist/hacker collective Anonymous also claims credit for sparking the idea. However it happened, on September 17 thousands took to Wall Street protesting (though what exactly was not made clear) with a hardcore group of between 100 and 300 forming the encampment at Zuccotti Park.

Today was day seven and the demands of the protesters remain unclear. Tiled on the ground around the edges of the park, like a political mosaic, are hundreds of signs, their words spanning the political spectrum: “Protect NYPD pensions,” “Buy gold, banker parasites hate it when you have real wealth,” “Money is the root of all evil,” “The answer to 1984 is 1776,” “Free enterprise is not a hunting license—Ronald Reagan,” “All wealth is for the betterment of all men,” and “End Capitalism.” At the protest a middle aged man passed out Ron Paul pamphlets and a few feet away young people dressed in black overalls and bandannas extolled anarchism.

But what they lack in political cohesion they make up for in unified anger, and from this anger emerges a will to action. Since day one a common criticism levied by passing bankers, tourists and ordinary New Yorkers has been the group’s lack of official demands. So on day five the protesters’ outreach committee began work on the manifesto that would eventually become that aspirational wallpaper.

This unorthodox method of deciding on their goals is just one example of the “radical democracy” that the protesters strive to enact. They have no governing body, no hierarchy, no leader. All large decisions are made by consensus at a “general assembly,” with small decisions and actions being taken by a slew of ad hoc committees. This concept is so central to the group’s practices that when their pro bono lawyers, led by Sam Cohen of Wiley Law, were considering filing an injunction, last Wednesday, to allow the protesters to stay in the park they couldn’t find a single person or inner circle to name as plaintiffs.  Instead, for the sake of the law they used the name “The General Assembly of the Occupation.”

However undeveloped their message might still be, they are remarkably well organized on logistics and operations. It seems at times that their main ideological innovation pertains not to demands for happens in the skyscrapers surrounding them, but to they organize their actions on the ground.

At the “general assemblies,” held at the end of each day, any protester is welcome. A committee, called the “Facilitation Committee” runs the assembly, creates a roster of speakers and limits discussion time. Decisions are not made by majority vote but instead by consensus; anyone may block a motion, but must then defend their stance. Compounding the inefficiency of “radical democracy” is a police ban on the use of megaphones. To get around that the protesters have devised a system: at the beginning of each speech the speaker shouts “mic check, mic check.” Those nearest him then begin to repeat the words until a critical mass is chanting in unison, repeating each sentence of his speech for the larger crowd.

Thursday’s general assembly lasted long into the muggy night. One speaker, Ted Actie, rejected the aid of the “people’s mic,” and with his loud voice gave a rousing if critical speech. Actie, who is black and from New York, decried the lack of diversity in the crowd, noting that the composition of the group did not reflect New York’s. He went on asking that protesters educate themselves and unify around a list of demands. Pointing out that that morning he had seen several protesters interviewed by the media, said the hopeful and passionate man “God help me, you didn’t know what the f— you were talking about.”