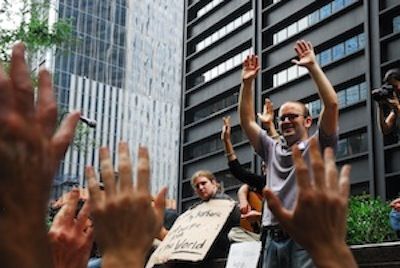 When American-Canadian writer and activist Jane Jacobs died in 2006 her New York Times obituary read: “At a time when both common and inspired wisdom called for bulldozing slums and opening up city space, Ms. Jacob’s prescription was ever more diversity, density and dynamism — in effect, to crowd people and activities together in a jumping, joyous urban jumble.”

More diversity, density and dynamism are what led to the arrests of more than 80 people on Saturday. Thousands of people from around the world had gathered in the financial district and marched north to Union Square, where police netted and cuffed the protesters. The masses of people claimed to be of the 99 percent who are excluded by the one percent wealthy elite’s decision making practices.

Ten days after the Sept. 17 Wall Street occupation, set forth by the Canadian magazine Adbusters, hundreds of people continue to occupy the square, formerly known as Liberty Plaza Park. There they sustain their own joyous urban jumble, complete with their own working groups that are open and free to all, such as media, legal, outreach, medical, arts and culture, direct action, “internet comfort,” treasury, facilitation, town planning, students, sanitation and food. What do they want? And why are they still here?

The consensus of the hundreds presently occupying what’s now called Zuccotti Park seems to be: We need to take care of each other. We need to build an inclusive society in which the decision-making process includes everybody, not just a select few. Decisions that affect us all should be created by all of us in a public realm. When that happens, everyone’s basic needs are addressed and no one becomes marginalized. Occupants want to lead by example and are practicing the process they want America to exercise through a horizontal and open participatory process called the General Assembly.

In 2006, the square was renamed Zuccotti Park after John Zuccotti, Chairman of Brookfield Properties and former New York City Deputy Mayor from 1975-1977. Zuccotti, who happened to be a Republican, is heralded as the “man who saved New York” from “financial ruin and went on to lead one of its biggest landlords, Olympia and York, through bankruptcy and restore it to health as Brookfield Properties,” according to Jonathan Tisch, host of the show Beyond the Boardroom.

During the interview with Tisch, which aired in 2009, Zuccotti explained how he was deeply inspired by Jacobs’ views on scale, diversity and how to maintain the neighborhood community aspect of urban living. “People want to live on that scale,” Zuccotti said. Shots of cobblestone streets in Tribeca and Greenich Village overlapped Zuccotti’s interview.

“One of the issues was making planning responsive to people. When I became chairman of the planning commission [in the 1970s when John Lindsey was mayor], they were about to abolish the planning commission. At the time there was no structure for the input of local communities into the planning process. So the challenge was to create that structure to articulate ways in which plans could be shared with the local communities and to give them an opportunity to be involved in the process,” Zuccotti told Tisch.

Tisch followed by asking Zuccotti if cities can only grow through the mechanism of public-private partnerships, emphasizing: “Is it based on the private sector working closely with the government because of their scalability and their resources?”

Therein lays the dialectic between the one percent and the 99 percent. Both groups seem to value scale and input from local communities. However, the activists want to see a direct participatory democracy that is horizontal and consensus-based. Resources should be equally available to all because everyone is organizing and contributing to the entire community.

There is a lack of diversity among America’s current decision makers, and yet their directives affect the lives of many. Joseph E. Stiglitz, an American economist and recipient of the Nobel prize for economics, famously wrote the Vanity Fair article titled “Of the 1 percent, by the 1 percent, for the 1 percent” in which he said, “The more divided a society becomes in terms of wealth, the more reluctant the wealthy become to spend money on common needs. The rich don’t rely on government for parks or education or medical care or personal security — they can buy all these things for themselves. In the process, they become more distant from ordinary people, losing whatever empathy they may once have had. They also worry about strong government — one that could use its powers to adjust the balance, take some of their wealth, and invest it for the common good. The top 1 percent may complain about the kind of government we have in American, but in truth they like it just fine: too gridlocked to re-distribute, too divided to do anything but lower taxes.”

Zuccotti Park, in response, is a display of people relying on each other for education, medical care, blankets and food. Ray, an activist from Boston explained, “This whole thing is a collection of all our efforts. Anyone can do whatever they want as long as it’s for the good for the group.” Her critique of the current American system is that many of the decisions are heavily influenced by people we do not know, like people on Wall Street. They are people or things without a face, but somehow they have value and can directly influence how people live their lives. Because of these faceless powers, people lose their homes, access to clean water and nutritious food. Having food, shelter, water and the means to pursue one’s life’s happiness are what constitute basic needs, according to Ray. In the park, “We speak for ourselves, take care of ourselves and others, and the result is that we’re all being provided for right now.”

Anyone can raise their voice and suggest something during the General Assembly and acknowledge that it’s one voice among a group that is far more diverse than the decision makers on Wall Street.

Louis Jargow, a Brooklyn resident and journalist who was arrested Saturday and released after two hours because of an open wound on his shin — the result of a police officer’s baton — needed to be treated was back in the park on Sunday afternoon. “When I first came here, I was not so sure about the General Assembly. But, it’s kind of the greatest thing that we have a self-determined autonomous group,” Jargow said.

“We’ve been duped by mortgage fraud, lobbyist groups, no taxation for the super rich, and we’ve been living in a way that is unsustainable,” said Mark Jacobs, executive director of Many Paths World Service, on Sunday. Jacobs, who came to New York from New Mexico specifically for the Wall Street occupation, suggests a “we first” world, not a “me first” world, and expresses the need for a life that is creative, diverse, collaborative and meaningful.

Hundreds of people are reclaiming Zuccotti Park as a place where they can exercise their liberties and establish a viable means through which all communities and individuals may exercise their right to live a fulfilling life.