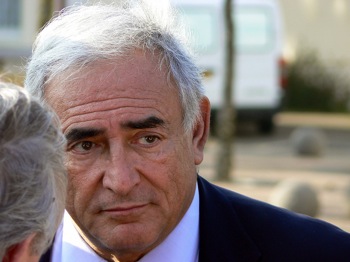 Little Dominique Strauss-Kahn is only 62 years old, yet he struggles each day with a tragic disability: Try as he might, he cannot tell the difference between rape and consensual sex. Little Dominique suffers from a disabling moral affliction known as Assgrabbers Syndrome (AGS). You can save little Dominique – or you can turn this page.

Little Dominique was born into grinding affluence in an exclusive, upper-class suburb of Paris. His parents were too wealthy to afford the basic moral necessities. Dominique’s father, a tax attorney, and his other role models led a hand-to-mouth existence in a ruthless, free-market “jungle capitaliste,” where “les profits” depended on daily toil – often from early morn till the late evening salad course, and even past the cheese plate.

Trapped in this milieu of genteel brutality, little Dominique learned early how to acquire more, ever more property, businesses, and resources through the art of cutting “les boules” off the competition. He became so adept, in fact, that the corporate locals gave him the gang name of “DSK” as a rite of passage. But because he had been deprived of the proper ethical nutrients – and vowels – little DSK’s basic human conscience could not develop; it became stunted and shriveled. Studies show that being reduced to a diet of raw power and money is a major cause of AGS, and so little DSK came to believe that the sublime human experience of “l’amour” could be experienced merely in terms of mergers and acquisitions.

Yet the plucky little DSK struggled bravely against his crippling deformity. Although duty-bound to become a corporate attorney, he also joined the French Socialist Party, pitifully hoping that the universal love of a future classless society would heal his affliction. But his conscience remained a tiny, gnarled stump, and upon becoming the French Finance Minister, little DSK implemented many privatization and deregulation policies. Ultimately, our wee Socialist hit rock bottom when he became head of the International Monetary Fund.

Much in the way that children in developing countries are forced into prostitution, little DSK was made to offer huge IMF loans under impossible terms to desperately poor countries. Inevitably, when these countries were unable to pay their debt, billions of nameless, faceless poor people – whose drinking water was polluted by corporations like Coca-Cola, and whose air was polluted by corporations like Chevron – became even poorer. This created a dangerous situation for little DSK, whose heartrending Syndrome was soon to be exploited.

You see, poor foreigners in their own countries – countries like Guinea, for instance – are good, honest people. But when poor foreigners come to our country, hoping to become less poor, they turn shifty and bad. Enter, from Guinea, Nafissatou Diallo.

Brazenly born where – thanks largely to the IMF – the average person lives on less than $1.25 a day, the wily Nifassatou grew up stinking rich in poverty. Ms. Diallo longed to flaunt her illiteracy and her underprivileged background of penury, despair, and violence. But the flaunting prospects were few in her native land. As soon as she became poor enough, she emigrated to the United States, where she found work as a shameless hotel maid. There, victim-extraordinaire, she waited to victimize the first hapless global financier whose bed she could “turn down.”

So it was, last May, that little DSK, worn out from his travails, checked into a $3000-a-night suite at the Sofitel Hotel in Manhattan. Washing off the day’s residue of monopoly capital, he emerged from his cold, cold granite shower to find – the uniformed Nafissatou, hot in the act of “cleaning”! It was, to little DSK, as if Nafissatou were compelling him to help her develop her global market value!

Some kind of merger happened. Was it a tender offer? A leveraged buyout? Or, as Ms. Diallo insists, a hostile takeover? Alas, due to little DSK’s moral deformity, we shall never know. Apparently, it doesn’t matter.

It doesn’t matter, because Nafissatou Diallo told some lies to the DA. Lies about things not having to do with the incident. When you’re an immigrant, lying counts a lot more than when you’re a CEO. As we read in the New York Times, “Mr. Strauss-Kahn’s lawyers … said in a statement that they had always maintained that the motivation of [Ms. Diallo’s lawyer] and his client was to make money.“

Rape-schmape: An illiterate immigrant woman from a dollar-a-day country who wants to make money? Now, that’s disgusting. In fact, you might say that poor women like this, who prey on the inability of innocent tycoons to distinguish love from lust, only want to rape big bank accounts!

This article originally published by GayCityNews.com