Jane’s Journey Directed by Lorenz Knauer Distributed by First Run Features, 2010 Jane’s Journey is a predictably, yet no less disappointingly, streamlined celebrity profile of living legend Dr. Jane Goodall, the famed primatologist whose trailblazing observations of wild chimpanzees made her a household name over half a century ago. Over more recent decades, Goodall, now 77, has become something of a patron saint of eco-activism, traveling around the world as a self-proclaimed messenger of hope, inspiring young people to become environmentally responsible. One of the most amazing aspects of Goodall’s journey was her radical choice to live life in the public eye, a belief that was kindled when she attended a conference on chimps in Chicago in 1986. Her exposure to brutal evidence of their endangerment — by killing for profit, mistreatment of captive animals used in scientific experiments and deforestation — made Goodall decide to abandon her idyllic existence in Tanzania’s Gombe National Park and mount an effort to sensitize her own species to its precarious relationship with the natural world. In Jane’s Journey, Goodall, with trademark equanimity, reveals how she has managed to carry the peace of the forest in her heart, but she also seems to be able to deploy her best qualities as a scientist — humility and patience — in productive interactions with people. The determination she shows by listening to personal stories reflects her long-ago controversial decision to refer to apes as individuals (“he” and “she”). Goodall’s disposition would probably have made her one heck of a documentary filmmaker, so it’s a pity Jane’s Journey does not unfold under her own direction. Narration from her letters and footage from home movies bear direct witness to the indomitable spirit that fuels her eloquence and sheer presence. Along with reminiscences on life in the jungle as a woman, wife — she lived out her two marriages there — and mother, they constitute the film’s most interesting bits. The rest veers between hagiography and a two-hour promotional video, which neither Dame Jane nor the Jane Goodall Institute need in order to shine. Would that journeyman director Lorenz Knauer had excised unnecessary tributes by the likes of Pierce Brosnan, Angelina Jolie and Kofi Annan in favor of a more detailed look into the groups formed out of Goodall’s Roots & Shoots youth initiative, or had chosen to pursue a more involved, poetic view of her communion with nature. 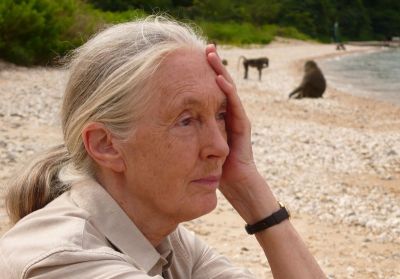